Author’s Note: I wrote the majority of this piece before the news broke that Addison Russell is currently under investigation for suspected domestic violence based on an Instagram post made by his wife this past Wednesday night and subsequent comments on said post by his wife’s friend. Obviously, domestic violence is a serious and heinous crime, and any analysis in this piece is trivial compared to it. As it stands, Russell is denying the allegations, and it should be noted that Instagram comments made by a third party don’t necessarily constitute proof of the alleged offense. To me, this is one more reminder of something I already knew, but as a fan sometimes forget: we don’t know these players, and they are not our friends, even though we are preconditioned to believe the best in them due to the positive experiences we share with them based on their on-field performance.

Baseball is by design a game of failure. Dexter Fowler, Ben Zobrist, and Kris Bryant were ranked seventh, eighth, and ninth in the NL in on base percentage during the 2016 season at 0.393, 0.386, 0.385, respectively. Each of these players parlayed their success into greater achievement, whether it be a lucrative contract, a regular season MVP award, or a Worlds Series MVP award. Even so, the 2016 Cubs trio paled in success rate to athletes like Lebron James or Kevin Durant who regularly have field goal percentages greater than fifty percent, or Aaron Rodgers or Tom Brady, each of whom have a career completion percentages greater than sixty percent. And since playing baseball is inherently random, writing about baseball similarly follows suit – a lot of what even the most astute writer speculates never does come to fruition (at least not in the manner predicted). With that in mind, it feels good as an author to successfully predict something that may have not been a part of the online baseball group think at the time. Here’s what I said about the Cubs offense on April 18 in relation to the slow start that Kris Bryant had gotten off to start the 2017 season.

When I wrote this I considered it to be going out somewhat on a ledge, possibly a shade too pessimistic. But as anyone who has watched the Cubs offense thus far in 2017 knows I probably didn’t go far enough in my pessimism. Going into today’s game against the Rockies the Cubs team OPS+ thus far in 2017 is only 95, good for seventeenth place overall in the majors and eighth place in the NL. But this is where the self congratulatory tone of this article ends; it turns out I was completely wrong on which young Cub hitters would struggle the most. Despite uneven performances to begin the 2017 campaign, Willson Contreras, Jason Heyward, and Javy Baez all currently have OPS+ within striking distance of 100, while (according to Baseball Reference) the Ian Happ, Albert Almora Jr., and Jon Jay triumvirate has contributed the eleventh highest offensive WAR from the center field position thus far in 2017 (defensively it’s a different story). Instead, the Cubs duo that has struggled the most thus far in 2017 are the two non-Bryzzo Cubs who have been mentioned as potential future MVPs: Kyle Schwarber and Addison Russell. Schwarber’s struggles have gotten far more attention, both because his fall as a hitter has been more dramatic, and unlike Russell, Schwarber doesn’t have other skills that can compensate for his lack of hitting. But that doesn’t make Russell’s struggles thus far in the 2017 any less significant; throughout this analysis I’ll examine what has gone wrong with Russell thus at the plate, and what some reasonable expectations are for the young Cubs shortstop for the remainder of the 2017 season.

To understand how expectations got so high for Addison Russell coming into the 2017 it helps to have some historical context. With the help of Baseball Reference, in the table below I’ve sorted out the highest career OPS+ (one hundred equaling league average) for middle infielders (since the inception of the designated hitter in 1973) who appeared in at least two hundred games prior to turning twenty three years old. 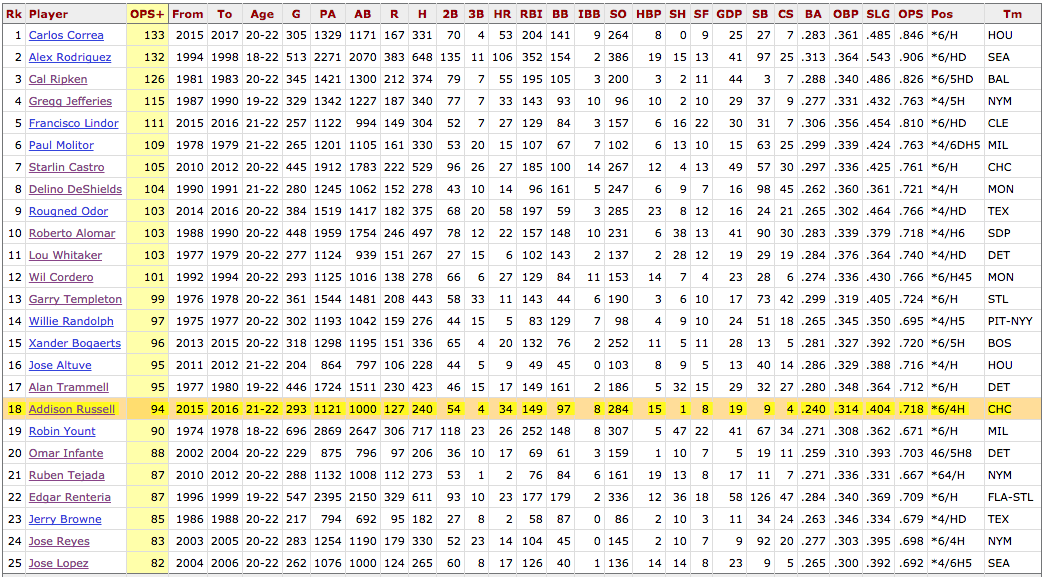 It’s an impressive list that sees Addison Russell rank eighteenth, ahead of Hall of Famer Robin Yount, and multi-time All-Stars Jose Reyes and Edgar Renteria. Ahead of Russell on the above list are a mixture of much-hyped number one draft picks who delivered immediately (Correa and A-Rod), Hall of Famers (Ripken Jr., Alomar, Molitor), near Hall of Famers (Trammell, Whitaker, Randolph), and current All-Star middle infielders (Lindor, Altuve, Bogaerts – additionally if Corey Seager met the games played requirement specified above he would rank ahead of Russell as well). However, the list also includes a quartet of players who had (or are having) uneven offensive production throughout their careers after a successful start: Starlin Castro, Delino DeShields, Wil Cordero, and Garry Templeton. It appears that Addison Russell appears to be trending towards this latter group with a current 2017 slash line through just over two hundred plate appearances of .209/.291/.335 (67 OPS+). Interestingly enough, another twenty-three-year-old middle infielder on this list, Rougned Odor, is struggling even worse than Addison Russell with a current slash line of .205/.249/.355 (58 OPS+). One more reminder that growth in baseball is often non-linear, even for the most talented players. With that aside, let’s take a preliminary look at why Addison Russell’s performance has suffered so much. Here’s the first level of peripherals:

For the third straight season Addison Russell’ strikeout rate has decreased to move closer to league average (2016 strikeout rate league average was ~19.0% among qualified hitters), while his walk rate has remained close to a solid nine percent. So a drastic change in strikeout rate and walk rate aren’t the main drivers, but the third column – batting average on balls in play (BABIP) – merits further investigation. We know from prior research at BP that a batter’s BABIP takes almost two and a half years (or over 1000 plate appearances) to stabilize, so it’s possible that Addison Russell may be a hitter that has a below average BABIP. Ten years ago, analysts might look at these numbers and expect Russell’s BABIP to regress and snap back to close to his career average. Thankfully we have Statcast now and can dig deeper, below are Addison Russell’s expected batting average, a figure based on exit velocity and launch angle inputs designed to determine what a player’s batting average based on quality of contact, vs. his actual batting average.

League average xBA from 2015-2016 was ~.246, so like OPS+, through quality of contact Russell has been a below average hitter for his first two years, although his athleticism allowed him to outperform his xBA in both 2015 and 2016. Russell did show signs of progress in 2016 raising his xBA twenty four points, and it was thought the combination of better pitch recognition through his decreasing strikeout rate, and the continued emergence of his natural power would lead his xBA to continue its increase in 2017. That hasn’t happened – as you can see Russell’s xBA has reverted back to close to his 2015 levels as rookie. By virtue of how xBA is calculated (value based on exit velocity/launch angle combinations divided by total at bats – strikeouts are included in numerator as zero), if Russell’s strikeout rate has remained consistent, then his precipitous fall in offensive performance thus far in 2017 can be pinned on his lack of quality contact, meaning that Russell has deserved every bit of his low BABIP in 2017.

Below are Russell’s plate discpline stats per Fangraphs

In 2017, pitchers have limited Russell’s ability to ambush first pitch fastballs and the young shortstop has struggled to adjust his game plan, even if it means he is ahead in the count 1-0. This is part of a broader trend – although Russell is getting ahead in the count more in 2017 compared to 2016 (2017 Hitters Count: ~37% of PAs vs. 2016 Hitters Count: ~34% of PAs), he’s continued to struggle to make solid contact. Looking into Brooks Baseball points to the fact that Russell’s struggles in 2017 may be traced back to his ineffectiveness against fastballs. According to the pitch outcomes tables below, although Russell is swinging at more fastballs in 2017 compared to 2016, his whiff rate against these fastballs in 2017 has almost doubled. 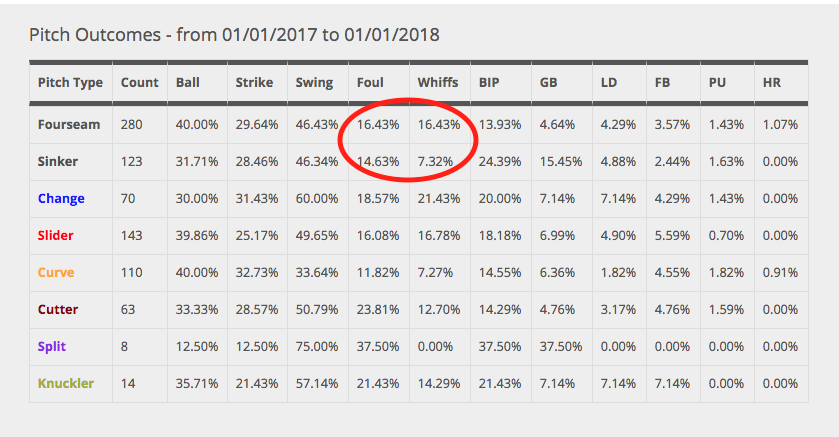 What’s even more perplexing is the location of the fastballs Russell is missing. Below are Russell’s whiff rates per zone – 2016 is on the left and 2017 is on the right. 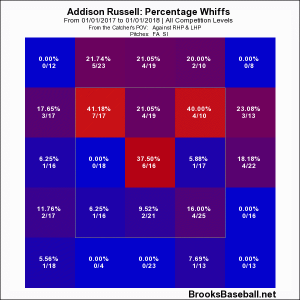 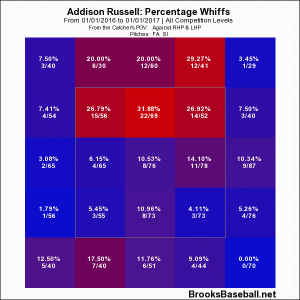 Through the first couple of months of this season, Addison Russell has whiffed at a large portion of fastballs thrown directly down the middle of the plate. It’s hard to be an above average major league offensive player if you’re swinging and missing at nearly forty percent of fastballs thrown down the middle. This is where you can take solace if you’re Addison Russell because unless he has developed some heretofore undiscovered hole in his swing, Russell is not going to continue to swing and miss at these meatballs down the middle of the plate. Perhaps Russell’s existing shoulder injury is disrupting his timing at the plate, causing him to be late on fastballs. If that’s the case perhaps a lengthier DL stint is needed in order to heal up before the second half of the season. The last thing the Cubs need is for an all around player to be limited to being only a defensive all star because of an early season injury, as may been the case for Jason Heyward in 2016.

Tags: Addison Russell |
Matt Petitt
Follow @@petitt_matt
Matt Petitt is a consultant in the financial services industry who grew up near and now resides in the Windy City. He likes to think of himself as level headed, but he once ate an entire box of Golden Grahams during a Cubs playoff season-ending loss, so it’s probably best that you decide for yourself.
read more from Matt Petitt