What You Need To Know Prior to the Top of the Ninth:

Pat Hughes: "One of the most gratifying wins for the Cubs all season long." (3-run 9th and a 5-4 win over Washington)

The above tweet and my crossed out recap signifies just how far back the Cubs had to come to steal this one from the Nationals and earn a four-game series split against the NL East division leader. Down 4-2 in the top of the ninth, Joe Maddon pinch hit Victor Caratini (in just his second major league plate appearance) for Albert Almora with one out and the tying run on first. Caratini hit a ground ball to short that should’ve been a double play and would’ve ended the game; fortunately for the Cubs, Daniel Murphy (in a delicious bit of karma after the 2015 NLCS) bobbled the ball, and the Nationals were only able to get the lead runner. With new life after the Murphy misplay, Javy Baez went the other way and singled to right to move Caratini to third, Tommy La Stella went the other way and singled to left to score Caratini and move Baez to third, setting the stage for Jon Jay. 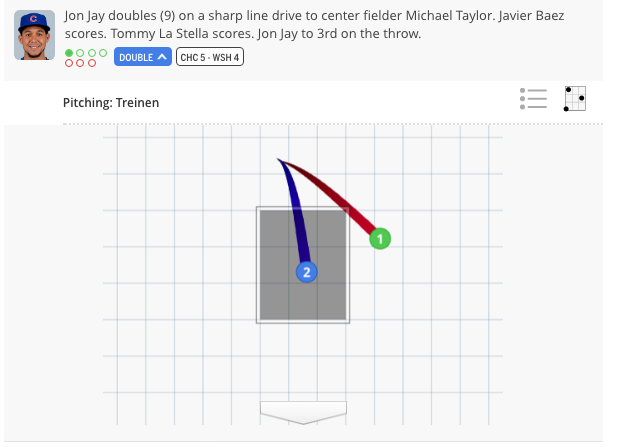 Jay lined a Blake Treinen ninety seven mph sinker into the right center field gap, scoring Baez and La Stella to give the Cubs a 5-4 lead. Wade Davis came in and shut the door ninth by retiring the Nationals in order. With the win, the Cubs remain above .500 on the season, and with a series win against the Reds this weekend will be able to finish their 11-game road trip with a winning record.

Next Level: With everything that has happened over the past 48 hours, a loss enabled by a bullpen blowup would have been devastating to the Cubs. Instead, it was the Nationals bullpen that gave up the lead, a disturbing trend that had plagued Washington throughout the year. You get the feeling that the Nationals bullpen woes, similar to the Dodgers struggles against left handed pitching in 2016, will be a season-long story as potential downfall to an otherwise elite team even if reinforcements arrive. For the Cubs, now is the time to put together one of those August 2015 or April/May 2016 runs where wins are rattled off by the half dozen. Let’s see if the 2017 Cubs have it in them.

Top WPA Play: The aforementioned Jon Jay double to the gap to give the Cubs the lead in the top of the ninth (+.666).

Bottom WPA Play: Anthony Rendon’s two-run home run off of Carl Edwards Jr. in the bottom of the seventh to give the Nationals their first lead of the day (-0.352).

Tags: Game Recap, Washington Nationals |
Matt Petitt
Follow @@petitt_matt
Matt Petitt is a consultant in the financial services industry who grew up near and now resides in the Windy City. He likes to think of himself as level headed, but he once ate an entire box of Golden Grahams during a Cubs playoff season-ending loss, so it’s probably best that you decide for yourself.
read more from Matt Petitt