Several days after a massive typhoon wiped out a number of US ships and officers in the south Pacific, Bill Nicholson found himself in the office of the Draft Board, waiting to hear whether his draft exemption would continue. As his teammates, one by one, joined the nameless masses fighting against fascism in Europe and the Pacific, Nicholson spent the summer days listening to adoring crowds chant his name. Though he contributed to the war effort by working in a plant and to the baseball world by routinely leading the league in home runs, his largest contribution to both came on this day, during this interview, for which he remains largely nameless.

Nicholson, who had been a rock in the Cubs lineup since his arrival with the team in 1939, performed spectacularly in 1944, cementing himself as the fan favorite. He led the league in runs scored (116), home runs (33) and RBI (122), losing the MVP by one vote to Cardinal Marty Marion. In a down year for the Cubs, who lost many great players to service, Nicholson provided respite for audiences should 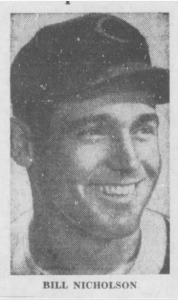 ering the physical and emotional toll of the war. All of his at-bats were must-see, regardless of the game’s score, his most rewarding of which occurred on July 30th in a doubleheader against the Mets, wherein he hit four consecutive home runs.1

Unlike his teammates, Dominic Dallessandro, Hiram Bithorn, and Hank Borowy, among others, Nicholson received draft exemptions in 1942 and 1943 for health reasons. Facing scrutiny from many in the baseball business for being healthy enough to play baseball but not to serve his country, Nicholson threatened retirement in 1944, fearing this backlash would lead to his conscription.2 Eventually torn between duty to country and love of baseball, Nicholson took up an offseason job in a war plant, at which he worked until opening day in 1945, returning to the Cubs as one of only two players on the roster who had been there since 1941. His return, many believed, would lead the Cubs to prosperous lands.

As America first closed in on Germany and then won battle after battle against Japan, inching closer to becoming a global superpower, Nicholson inched closer to retirement. On a much-improved team with the return of many of its star players, the one constant throughout the war period broke down. He endured a 26 game homerless streak that stretched through much of May and June, eclipsing the 15-game streak that began his season. Rather than steeped in anticipation, his at-bats were now consumed with healthy doses of pity and resignation. Though he remained a sentimental favorite for some, the offensive juggernauts Phil Cavarretta and Stan Hack surpassed him in popularity.

On June 7th, 24 games into his homerless streak, Nicholson sat nervously in front of the Draft Board, reimagining his future as a baseball player and beginning to entertain the idea of entering the war as a soldier. He answered the Board’s questions, detailing his career and his employment in a war plant, unaware of the consequences of his interview for baseball as a whole. He had finally run out of excuses in the one year in which his health may have been questioned, but the Draft Board had far greater plans for him than as a soldier. The Draft Board, beginning to look toward a post-war America, wanted to use Nicholson to measure baseball’s usefulness “as an occupation in support of the nation’s welfare.”3

Luckily, the Draft Board declared baseball a legitimate occupation, and Nicholson was free to join the team, now knowing that his participation in the sport did not come at the expense of duty to country. With the Draft Board’s declaration, baseball players who went undrafted were free to rise to the level of those who served. The young could know their date of birth did not preclude them from serving the country, and the old and weary could join hands with the returnees and work toward re-entrenching baseball as a source of American pride.

Though the catalyst for this reinvigoration of baseball, Nicholson himself received little reward. Teammates who found themselves on base in front of him faced perhaps a more difficult path home than those returning from battle. His average continued to decline, precipitated by a decline in eyesight, and two weeks after the country declared victory over Japan, Nicholson found himself benched for the first time in his career, replaced in right field by first baseman Phil Cavarretta.4 He returned to the lineup the following game, but he fared even worse, capping his season with a 17-game homerless drought.

Despite Nicholson’s decline, the Cubs cruised to a first-place finish, boasting the best offense and pitching in the league. They stormed into the World Series against the Detroit Tigers, bringing with them a rejuvenated fanbase relinquished from the grasp of war. The stands were routinely filled with heroes of various order and rank, eager to enjoy freely the pastime for which they fought. It was before these crowds that Nicholson again became a household name and a hero to many. During the seven-game series, Nicholson established himself as the Cubs’ most important player and the series’ best offensive producer. He did not produce many hits, but in front of crowds desperate to recapture the feeling of being home, he finally gave that same feeling to his teammates, driving eight of them home across the seven games. And, though for only a short while, Nicholson became the face of Chicago baseball and the key to normalcy for its fans.

Nicholson’s health continued to decline, and in 1950, during his worst season, he was diagnosed with diabetes. He retired from baseball in 1953, just as the relationship he unknowingly helped foster between baseball and the military came to fruition. Despite this connection to the military, Nicholson’s career stands as a testament to the variety of ways of contributing to the country, and though his contribution may not be regarded as highly as those of his teammates who fought, it stands as an important reminder that at the heart of America lies a search for happiness and delight.

Tags: Cubs history, World War 2 |
Mary Craig
Follow @marymcraig
Mary is a political science grad student who finds herself in Texas after detours in Canada and Massachusetts. She is a lover of sports, baked goods, semi-colons, and Times New Roman font.
read more from Mary Craig