What You Need To Know: Determined to atone for their putrid offensive performance last night, the Cubs’ bats laid it on so thick tonight that even Kyle Hendricks battled his instincts to join in on the fun, walking away with two hits including a two-run single. Also contributing significantly were Rizzo, who drove in five runs on two home runs and a single, Bryant, who went back to back with Rizzo in the 5th, and La Stella, who started the scoring with a solo home run and added another (two-run) homer in the 9th inning. Rounding out the fine performances was Hendricks the pitcher, who allowed two runs while striking out eight over seven innings.

Next Level: Ever since coming back to the rotation after going on the right-hand tendinitis, Hendricks has seen better results, particularly in August. Though he is both striking out more batters (8.4 SO/9 compared to 7.9 in May) and walking more this month than in either April or May, he is consistently going deeper into games and giving up fewer hits and home runs per nine innings.

This month, Hendricks has steadily lowered his arm slot on his fastball and changeup, featuring the lowest slot he has used at any time in his major league career. Conversely, he has raised his arm slot on his curveball this month, placing it closer to where it was for much of 2016, a change from the rest of his career in which all his pitches have been released from similar slots. 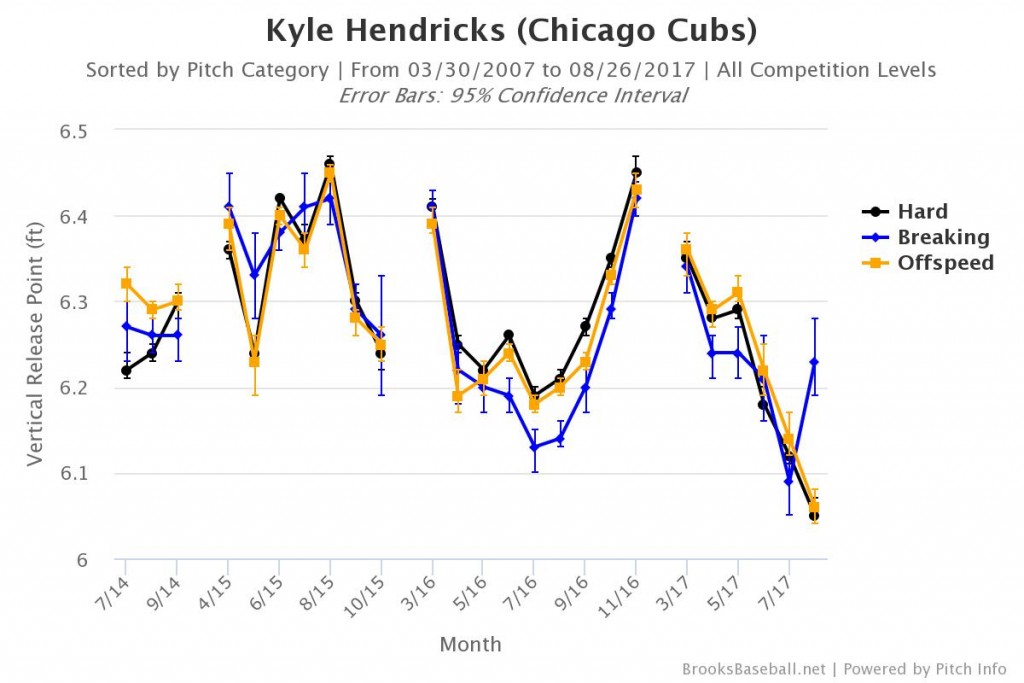 This change in arm slot has done no favors to his curveball, on which players have a 1.500 ISO this month, the highest rate of his career. However, Hendricks is throwing fewer fourseamers and more changeups than he has so far this season and at any point last season, relying more heavily on his changeup, which has become his most effective pitch. Batters have a 0.000 ISO against it and are whiffing 25 percent of the time in August, matching (and exceeding) its effectiveness through the bulk of 2016. Much of Hendricks’ improvement can likely be attributed to this increase in effectiveness and use of the changeup, and somebody far more intelligent than I can probably relate it to the lower arm slot.

As for the offense, it looked for much of the game like the team would be carried to victory by Bryzzo, until the rest of the bats came to life in the 7th inning. Bryant’s two hits both looked promising and will hopefully pull him out of his mini slump this past week that has seen him collect only two hits and one RBI. Thus far, August has been the best offensive month for the team, thus far producing an .828 slugging percentage and scoring 144 runs.

Thus, this game continued larger August trends for both Hendricks and the offense that will hopefully spill over into September and later.

Top Play (WPA): In a game that featured seven of them, it’s unsurprising that home runs dominate this section. For the Cubs, Anthony Rizzo hit a two-run home run in the 3rd inning, driving in Jon Jay to give the team a 4-2 lead. (+.270)

Bottom Play (WPA): The scoring began with yet another Rhys Hoskins home run. In the first inning, he hit a 2-run dinger, bringing home Freddy Galvis for the only two runs the Phillies scored in the game. (-.179)

Tags: Game Recap, Philadelphia Phillies |
Mary Craig
Follow @marymcraig
Mary is a political science grad student who finds herself in Texas after detours in Canada and Massachusetts. She is a lover of sports, baked goods, semi-colons, and Times New Roman font.
read more from Mary Craig