In baseball, leadership is often viewed as critical to a team’s success, but it is also incredibly difficult to quantify, taking on many forms and adapting to the particularities of the game. There are both silent and vocal leaders, ones who allow their play to speak for them and others who distinguish themselves in their words. But one of the universal elements of leadership is sticking up for one’s teammates, although, again, this includes a variety of interpretations. Thus, throughout the 142 years of professional baseball, the sport has seen a number of leaders who each bring unique qualities to the position, accounting for the uniqueness of each group of players. Over time, the role of the leader has changed, accounting for the differences in the game, and so it became even more impossible to gauge the effectiveness of players’ leadership skills. Nonetheless, and accounting for the vagueness and malleability of the term, there exists one player whose leadership skills are as puzzling now as they were to many at the time of his career. 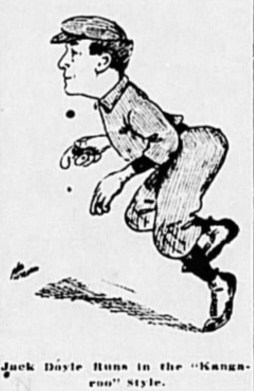 bases, and was the first pinch-hitter in major league baseball, hitting a game-winning single on June 7th, 1894. Despite these numbers and milestones, his reputation as a hot head eclipsed both his playing and scouting victories. His frequent skirmishes with players, umpires, and fans quickly garnered him the nickname “Dirty Jack” (which he insisted was due to his aggressive baserunning) and made him a popular player for teams to quickly trade. Baseball in these early years overflowed with oddities, however, and this reputation also established Doyle as one of the best leaders in the game.

Doyle arrived in Chicago in 1901, via a trade with the New York Giants in exchange for infielder/outfielder Sammy Strang. Though he had a two year contract with Chicago, Doyle only lasted one season before being shipped back to the Giants. Although several New York writers celebrated Doyle’s departure, asserting it “removed the cause of much dissention in the team,”1 his acquisition was met with strong approval from many outside sportswriters, one of whom declared, “Doyle will be the best captain the Orphans have had in years.”2 He was supposedly the best person to whip the youthful team into shape. Unfortunately, leadership ranked low on the team’s list of necessities, and however much it was worth in intangibles was not enough to compensate for the team’s lack of talent on both sides of the ball. Beginning on the fourth game of the season, the Cubs occupied the basement for much of the season.

Doyle himself had perhaps the most lacklustre season of his career, battling various injuries that inhibited his bat and foot speed. In mid-May, he provided leadership in the form of absenteeism, as he injured himself kicking over a brand new ice cooler—as well as a Labrador who wandered too close—in the press box following a loss to the Phillies.3 The team weathered his month-long absence dutifully, losing just as they had with him in the lineup, albeit in a more puppy-friendly manner.

In late June, with the team scuffling as always, sports writers tasked Doyle with re-energizing the team following his return to the lineup. As one particularly quaint writer put it, Doyle had finally ceased “playing puss in the corner with symptoms of “charley horse” and has resolved to give up the Rip Van Winkle role and “get into the game” once again.4

Perhaps finally willing to embrace the leadership role in Chicago as he had done elsewhere, Doyle rose to the occasion. On July 1st, his first game back for injury and his first at Polo Grounds since the trade, Doyle was determined to make his mark. Giants fans, who had suffered through many of his temperamental instances, began heckling the volatile first baseman, trying to throw him off his game. After receiving a number of particularly personal insults from one fan in attendance, Doyle politely (yes, you read that correctly) asked him to cease. The fan, however, asserted that if Doyle truly wished for the heckling to end, he could come into the stands and settle the matter from there. So in the 5th inning, Doyle did just that. He leaped over the rickety wooden fence and into the stands, quickly found the fan and struck him so hard with his left fist that it sounded like “somebody had slapped a couple of flat beards together.”5 The initial blow was hardly enough to satisfy the virulent Doyle, and so he continued to pummel his larger opponent until police officers came to the fan’s aid. Unlike previous fights, this one did not end in Doyle’s arrest, but after he left the game in the 8th inning with a sore hand, several police officers escorted him out of the park.

Newspapers latched on to this story, as they did all Doyle stories, describing Doyle as having “harpooned a guy at Polo Grounds.”6 This time, however, his beloved leadership took a hit. He was charged with giving up on the team after realizing it could not surpass the Reds.7 And while many acknowledged the fan likely deserved much of what he got, they chided Doyle for “foolishly taking the matter into his own hands” and “giving the whipping” far too publicly.8 In halting the game to attack a fan, Doyle had “thrown disgrace on the sport,” finally crossing the line.9

The remainder of Doyle’s time with Chicago was rather un-noteworthy. The team finished in sixth place without the aid of Doyle, who missed much of the latter schedule with various injuries. Although he spent four more years in the major leagues and continued to find his way into leadership positions, Doyle’s reputation as a leader never fully recovered. Conversely, the Cubs began to flourish without Doyle. In the succeeding years, the team shot up the standings, relying on the team’s young talent (which had not been too badly scarred by Doyle) and veteran leaders (who were quite the opposite of Doyle) to cap the run with back-to-back World Series titles in 1907 and 08. Much like the 1901 season, Doyle’s leadership came in absentia; the Cubs learned much of what successful leadership actually entails and so while Doyle’s career waned, the team’s was just beginning.

Tags: Cubs history, Jack Doyle |
Mary Craig
Follow @marymcraig
Mary is a political science grad student who finds herself in Texas after detours in Canada and Massachusetts. She is a lover of sports, baked goods, semi-colons, and Times New Roman font.
read more from Mary Craig