The task of driving a milk wagon was a particularly dangerous affair, as drivers had to contend with delicate glass bottles, disgruntled customers, disgruntled horses, and careless drivers all too willing to slam into the poor wagons. By the early 1920s, milk wagon drivers had added another name to the long list of perils: the Milk Wagon Drivers Union. One of the first unions in Chicago, the MWDA since the late 1890s had slowly increased its power, until it was a force to be reckoned with. But the victims of its power were most frequently wagon drivers who were reluctant to hand over their hard-earned money to the union. In 1928, the union reduced the drivers’ workload and increased wages, but union heads had joined forces with the largest of Chicago’s milk distributors to create a monopoly, and any driver that did not support this action received first threats and then physical violence, which were compounded by anti-unionists pretending to be union heads.1 And so, in need of escape from this exploitative violence, longtime milk wagon driver Edward Young showed up at Wrigley Field on June 21st, intending to enjoy a peaceful day at the ballpark.

That day, the fourth place Cubs took on the first place Cardinals in a doubleheader. To that point, the Cardinals led the season series 6-4, but the vast majority of the games were highly contested, close scoring affairs that ensured the paying fans received their money’s worth. The first game of the day perfectly aligned with this pattern. Backed by veteran pitcher Fred “Sheriff” Blake, who added a two-hitter to the best season of his career, the Cubs defeated Clarence Mitchell and the Cardinals 2-1.2

The second game promised to be a much wilder affair as the Cardinals, led by the season’s eventual MVP, Jim Bottomley, scored four runs in the first inning. The Cubs closed the gap to three runs after the first inning, thanks to a Riggs Stephenson RBI single. Though both teams looked poised to unleash the offense silenced in game 1, all scoring concluded in this inning. The subsequent seven and a half innings came and went with little excitement, and those who had been at the ballpark since early afternoon filtered out, determined to make it home before dinnertime.

Sensing an opportunity to get more than his money’s worth, Edward Young clambered down from the stands into the now-vacant second box seats. Though his original seats provided a nice view of the field, they were wholly insufficient for Young’s purposes. Over the past several innings, he had tried to engage Hack Wilson in conversation, but his grandstand voice was more than drowned out, pittering out far short of the field. In these new seats, however, his messages made their way to Wilson’s ears with ease as the outfielder made his way back to the dugout following a groundout. First, as anyone intent on engaging in conversation with somebody ought to do, Young ensured Wilson knew it was he to whom Young spoke. “You!” Young declared to Wilson, “you fat so and so!” The specificity of the insult immediately garnered Wilson’s attention, creating the perfect moment for Young to launch into a statistical inquiry: “Whinell don’t you bench yourself?!” You see, Wilson had only recorded a trivial two hits and two walks in his eight plate appearances that day, a feat anyone could match.3

But Wilson, for whatever reason, did not appreciate the logic behind this question. Into the second box he sprang, intent on ensuring Young would never again be able to ask him anything. After him went Gabby Hartnett and Joe Kelly, intent on masquerading themselves as peacemakers. On to the field streamed 5,000 fans, unsure to whom they should direct their anger, but nonetheless intent on adding to the mayhem.

The entire affair lasted twelve minutes. Police officers broke up the fight, ushered the fans back into their seats, and left the game with a bloody Young, who promised to sue Wilson. The Cubs lost the game, and the milk wagon driver spent the night in jail. The next day, Young appeared before t 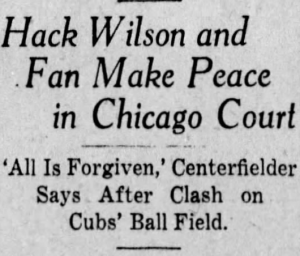 he judge, charged with inciting a riot. The judge levied some advice onto the 39-year-old, declaring that “when a man makes a good play, encourage him, and when he makes a bad play encourage him to make a good one the next time.” Young was deemed guilty and walked out of the courthouse with a $1 fine and the title of “a bad sportsman.” For his involvement in the fight, Wilson received a $100 fine from the National League president, John Heydler.4

For two days after the incident, members of the Milk Wagon Drivers Union bought tickets to Wrigley to expressly boo Wilson and Hartnett, but the pair hit crucial home runs in two victories, which quieted the drivers. And as the calendar turned to July, the event seemed like it was behind everyone. But Edward Young was not one to break promises, and so on July 25th, he sued Wilson and the Cubs for $50,000, demanding $20,000 for physical injuries and $30,000 for a damaged reputation.5

Hack Wilson and the Cubs finished the season strongly, despite this lawsuit. He led the league in home runs with 31 and finished seventh in the MVP race, helping the Cubs to a 3rd place finish, the best the team had done in ten years. But Wilson could not hide from Young forever, and so the two again stood face to face eighteen months later, on February 11th, 1930 in the Cook County Circuit Court.

Young admitted to the court that he had been drinking, but asserted he had not been intoxicated and had not called Wilson any harsh insults. He brought his physician—and only witness—to the stands to testify that he had treated Young for a bruised back and a bloody lip. Wilson, conversely, alleged that he had not laid a hand on Young, and it was Young, who after seeing Wilson slip on the concrete, jumped on top of the player and began punching him. Corroborating this story were Hartnett, police officers, a hotel owner, and a customs attorney.6 Despite the plethora of newspapers reports of that game verifying Young’s account of events, the jury spent all of 25 minutes deliberating and came out in favor of Wilson, effectively ending the matter.

This may have been the most personal loss Young faced in his adult life, but it was not the last, nor was it WIlson’s last victory. As Young exited the courthouse and returned to his thankless job, the MWDA was gearing up for years of fighting that would change the milk delivery system forever, at the expense of those like Young. Hack Wilson returned to the Cubs, finalized a contract for the season, and continued on a path to immortality as a member of the Hall of Fame.

Tags: Cubs history |
Mary Craig
Follow @marymcraig
Mary is a political science grad student who finds herself in Texas after detours in Canada and Massachusetts. She is a lover of sports, baked goods, semi-colons, and Times New Roman font.
read more from Mary Craig