There are no such things as must-win games until you’re actually facing the axe. There has only been one series comeback from a 3-0 as we know, and those Yankees did not have this rotation or bullpen (just the closer, and the Red Sox got to him, which is an important lesson). Good for the Cubs then that they return home and they will be trotting out a fully-rested starter for the first time, who just might be their most trusted postseason pitcher. And it’s still going to be exceedingly hard to get back into this series.

The first question that will be rolling through Cubs’ fans heads is what exactly happened to Hendricks in Game Five of the NLDS. Quite simply, he was off, catching more of the plate than he can afford to. And it could have been way worse, because his last pitch to Ryan Zimmerman should have been landing somewhere on The Mall: 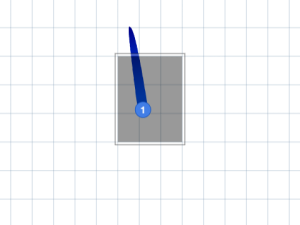 And that was basically the story all night for Ol’ Kyle. The pitch to Michael A. Taylor was above the zone, but it was about a foot from where Kyle wanted it horizontally, and because he doesn’t throw that hard, it was gettable. And it got got.

Which is a little worrying when facing the league’s most patient team. The Dodgers have been excellent in taking pitches just outside of the zone, which has driven Jose Quintana and Jon Lester out of the games early, and even in Game Two they drew just enough walks to turn the lineup over again to get to Justin Turner for the biggest moment of the series so far. If Hendricks is off his spots even by just a little, the Dodgers aren’t going to follow him out there. And if he has come closer to the middle of the zone, it is going to feel awfully tense in Wrigley awfully early tonight.

On the plus side, Hendricks has handcuffed everyone he has faced in this lineup. For instance, Justin Turner is 2-for-14 against him. No one he’ll see has ever managed more than a hit against him elsewhere, admittedly saying that these pitcher vs. hitter stats don’t count for as much as we’d like. It’s all contingent on what Kyle has on the night.

On the other side, it’s Yu Darvish against the dead salmon the Cubs have been bringing to the plate with them all playoffs. I sort of hate it when the manager is the first to point out, “we’ve scored this many runs in this many games.” Well why, Joe? Is it just the good pitching the Cubs have faced, i.e. Stephen Strasburg twice, Max Scherzer, Clayton Kershaw, Rich Hill, and the Dodgers pen, all among the best at what they do? Because that’s certainly an explanation. But if it’s the only explanation, than the Cubs are already in the grave because that bullpen isn’t going anywhere, Darvish can be that on his day, and Kershaw and Hill are going to be seen again if the Cubs have designs on winning this. Is it the Cubs approach? Certainly at times in Game Two it was that. Have they been better scouted? Because that shouldn’t happen.

And they’ll be facing a Darvish who is on a roll. His last three regular season starts saw him strike out 21 while walking one and giving up a solitary run. He only gave up one run in Arizona in Game Three of their division series, though only got through five innings as Roberts was in a hurry to get to his pen that night. And there’s another problem. The window to beat up a starter against the Dodgers just isn’t all that big before Roberts runs for his the security blanket of his bullpen. And it’s not easy to get to Darvish early unless he’s walking guys, as he throws about seven different pitches. Add to that the only Cub who’s seen a lot of him is Ben Zobrist, and it hasn’t gone well, and you see the challenges here.

But at some point, and that point is probably right now, that’s got to stop mattering. At some point, the Cubs just have to hit whatever’s in front of them, as they can’t wait around to be a bum-slayer because there are no bums this time of year. Maybe an approach more focused on going the other way, my big bugaboo with this team at times, and at least try and string a couple hits together to get some high-stress pitches and situations against the other team. Yes, #BallGoFarTeamGoFar, but there are times when it’s more prudent to just try and get the ball in play. Essentially, that’s what won the Nationals series. When there are mistakes to be whacked, then you go to town. Or maybe not. I’m just a drunk with some thoughts.

Maddon has a fully-rested starter. He should have a fully reset bullpen. In his dreams Hendricks just hands the ball to Wade Davis, but Carl Edwards, Pedro Strop, Hector Rondon should all be available for an inning as well.