Year in Review: For the second year in row, Rondón lost the favor of Joe Maddon and found himself as one of the last relievers sitting in the bullpen most nights. The merit of this decision did not find itself discussed often in the pages of baseball blogs, although it probably should have—by the end of the year, and certainly in the playoffs, there were concerns about the consistency of the bullpen. With Koji Uehara injured, Carl Edwards walking too many hitters, and Justin Wilson falling off the face of the earth, the Cubs stared down the tall task of winning in the playoffs with just two relievers in whom their manager trusted. Rondón was unfairly shunted in the playoffs, not even making the Division Series roster. Even though he was coming off an injury from early September, Maddon could have made better use of the long-tenured righty.

Rondón pitched lights out over the last month, before and after his injury. I’ve summarized this impressive stretch elsewhere, but it’s worth repeating: his last 13 appearances featured no walks, and in his last 10 he gave up no runs. The season ERA is unsightly, but his DRA was 25 percent better than league average, and his strikeout rate was the best of his career. Rondón also had the worst walk rate of his career, however, doubling his 2016 percentage.

Looking Ahead: It’s the latter factor that looms largest heading into 2018. Rondón had one of the best walk rates in the bullpen, and was one of the only Cubs to come in below league average. A troubling trend across the Cubs’ bullpen, the upward walk rate trend among Cubs relievers likely becomes the primary concern of new pitching coach Jim Hickey this offseason and in the spring. Look at his zone profiles, though, and one might begin to think that Rondón doesn’t have a problem at all: 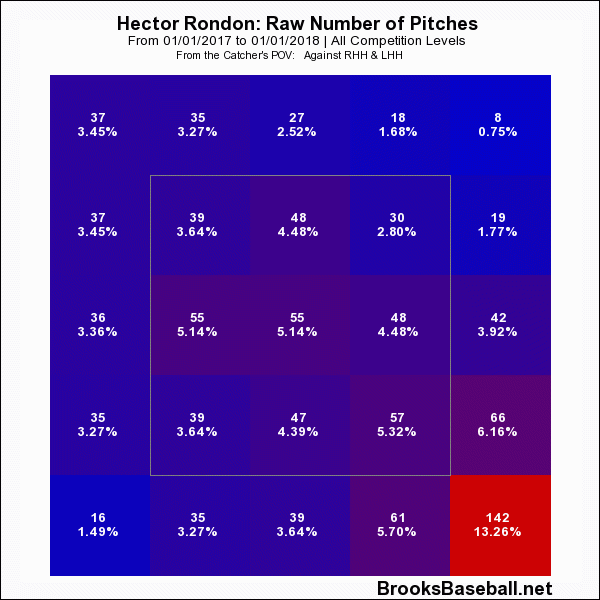 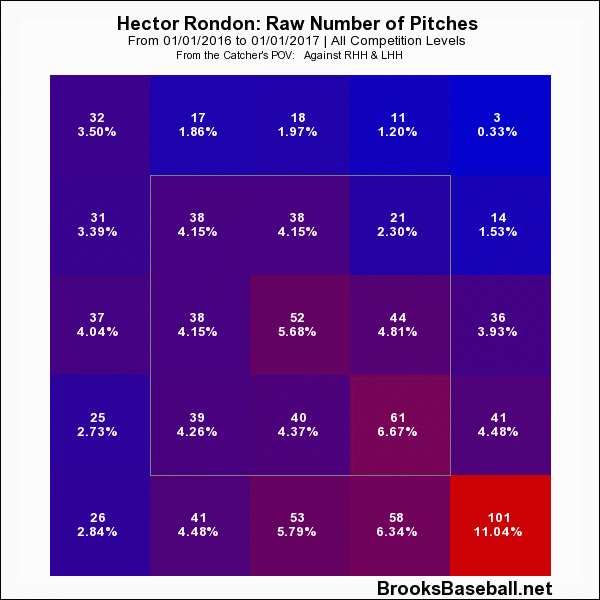 In 2017, Rondón was more successful at burying his pitches low and away to righties and low and in to lefties than he was in 2016. This suggests that Rondón’s walk rate was something of a fluke, or outside his control. There’s a good chance that Rondón’s sequencing or hitters’ increased patience against him are the producers of the high walk rate, so don’t be surprised if Rondón slashes his walk rate in 2018.

In terms of his role, Rondón’s future is murkier. Despite pitching very well for the Cubs in his fourth straight year, Rondón will likely lose high-stress innings to Edwards and Pedro Strop. The addition of a new closer, the re-emergence of Wilson, or the re-signing of Wade Davis would also push Rondón down the bullpen ladder. Should the Cubs tender Rondón a contract—and they should, even though there are many good relievers on the free agent market—then Rondón should be tapped for similarly high-leverage situations to the aforementioned relievers.