Before I turned off Wednesday night’s game in a struggling-Kyle-Hendricks-induced rage, Ron Coomer made a very interesting point. It came in the first inning, when Javier Báez laced a double that preceded the Willson Contreras home run off of Alex Wood. The double went to center field on a 2-0 count. It was just a small part of a stellar series for Báez.

In addition to his characteristically great defensive play, Báez took on a starring role in the Cubs’ series in Hollywood (no, I haven’t been waiting all week to use that line, why do you ask?). He recorded multiple hits in three of the four games, going 11-for-18 overall. That performance included three doubles and a pair of home runs, one of which was a grand slam on Tuesday night.

Coomer’s comment, though, focused on Báez’s ability to get the ball to the opposite field. He didn’t necessarily note that Báez is doing it with more regularity, but rather the fact that doing so would make him a more dangerous entity at the plate. We know that Báez can turn on an inside pitch and launch it in a way that few hitters in baseball can. What that has led to is more pitchers attacking him on the outside of the strike zone. We know from watching Báez that he has always been susceptible to those pitches on the outer portion of the zone, especially the breaking pitches low and away.

In demonstrating more zone coverage, Báez becomes that much more difficult to pitch to. And his numbers indicate that he could be working towards doing just that.

While the overall pitch distribution hasn’t really changed against Báez, in terms of hard, breaking, and offspeed pitches, there’s been a clear trend from opposing pitchers in attacking him, throughout his career: 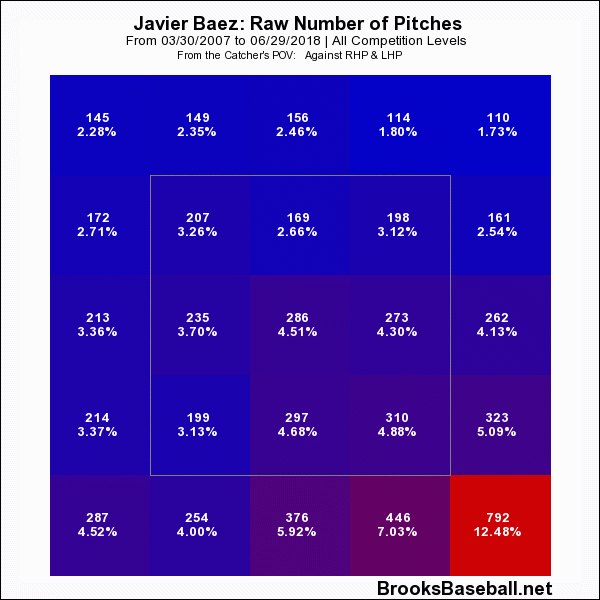 Now, that’s an ideal spot in which to attack a number of right-handed hitters, but it’s a focus for pitchers against Báez especially. This is a considered plan, given his past tendencies for hacking at those pitches in that part of the zone.

However, Báez is showing some growth in that area. The following pair of charts show his batting average on pitches in various parts of the zone from the start of his major-league career to the end of May 2018, and then from the beginning of June 2018 to today, respectively. We’re obviously working with a super small sample in the latter case, but it does indicate some real success for Báez on the outer part of the zone, nonetheless. 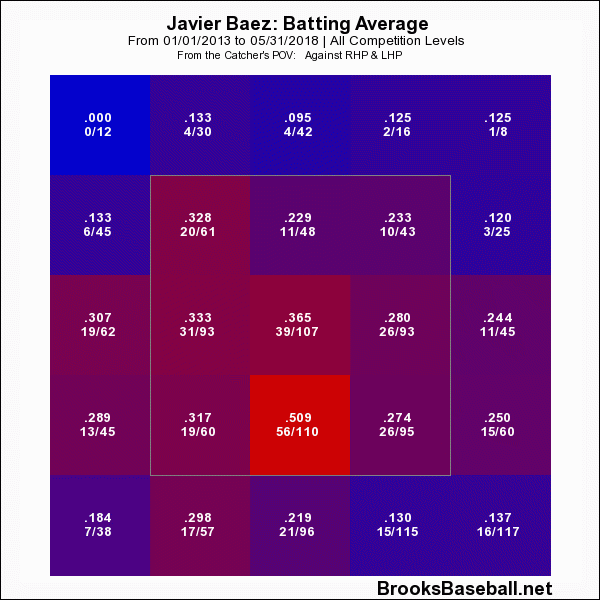 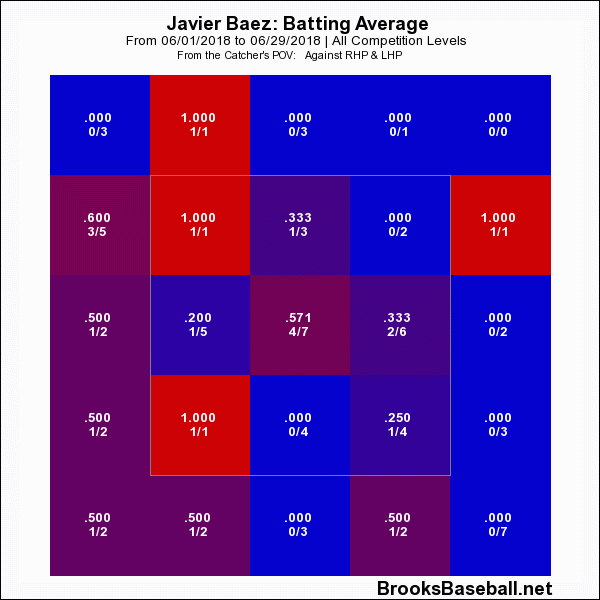 His progression throughout the year indicates the same. The following represents his opposite field percentage from throughout this year so far:

His overall opposite field percentage this year against previous years is also telling. He’s taking the ball to the opposite field just over 27 percent of the time, compared to 19.9 percent in 2016 and 21.9 percent in 2017. It’s also worth noting that his hard contact rate for the month of June is sitting over 47 percent. The only middle infielders to hit the ball harder over the past month are Trevor Story and Nick Ahmed.

Overall, Báez’s numbers are in line with what he’s turned in in his career. His line includes a .279 average (.273 the last two years) and a .318 OBP (.315 combined the last two years). The big difference this year is the power. His .279 ISO and .876 OPS have contributed to TAv (.308) and wRC+ (128) numbers that are far above his career norms. And with the raw power that Báez possesses, he can get it out to all fields. In covering the zone like he’s shown capable of doing in recent weeks, he increases the danger opposing pitchers are in when facing him, and the power will always be a threat at the forefront of their minds.

To Coomer’s original point there, there’s something to be said about the effort that Báez is putting in to drive the ball to the opposite field on a more consistent basis. The book on Báez has always been “power, but susceptible to strike outs,” especially on those pitches on the low-and-outside portion of the zone. But Báez, ever the exceptionally hard worker, is making a conscious effort to combat that book.

Look, the punchouts are always going to be there. Javy is as free a swinger as there is in baseball. While there have been some notable improvements in his plate discipline, they’re largely on a more granular, plate appearance basis, and he’s still hacking over 60% of the time and whiffing about 18%. But the opposite field trend developing here is encouraging. Even the fact that he’s showing that ability with an ounce of consistency is an integral step in his development as a hitter.

Báez previously had to rely on pitchers coming to him in order to get the power bat moving. As such, opposing pitchers could work the outer parts of the zone to combat him. But with the opposite field power coming along as it is, where are you supposed to go as a pitcher? Even if the whiffs remain a consistent element of his game, the power has the ability to grow, as his minor-league scouting report always promised. As an opposing pitcher, Javy Báez is becoming that much more difficult to figure out.

Tags: Javier Baez |
Randy Holt
Follow @RandallPnkFloyd
Randy Holt is a staff writer for BP Wrigleyville. He also demonstrates what little writing talent he has on the fantasy side of Fangraphs, with a focus on third base for Rotographs. A native of Chicago, Randy is a Phoenix-area resident and a high school teacher, educating juniors and seniors on the finer points of American and British literature.
read more from Randy Holt

Vote Javy to the ASG. He is sooo deserving. Even if you look at his numbers straight up against Albies Javy has the edge. I have been voting 10 times a day.