If you want to start worrying about the Cubs rotation, I’m going to give you permission to raise your threat level from green to orange. Not that you really know what that means, but it probably means adjusting in your seat. Jon Lester has been riding his luck and the Cubs defense, and you never know when the train goes over the cliff on that one. Darvish might be out a while. Quintana seems to be allergic to the sixth inning, and Kyle Hendricks can’t stop seeing the backs of his outfielders, when they even bother to chase whatever laser is being projected over their heads and giving them the finger from way above.

We’ve gone over what is new with Q under Jim Hickey. He’s using his fastball much more than he ever has, and Hickey is trying to get him to go to both sides of the plate against righties, just as he is with Lester. Lester liked to stay on the outside corner at the knees, whereas Q liked to be in on the hands. Check out the difference in his career and this year for fastball placement for Q: 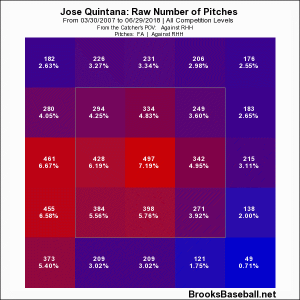 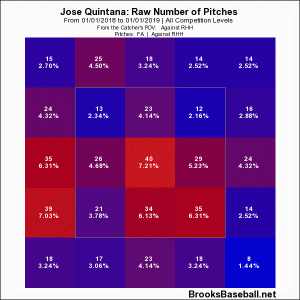 He’s going for the outside corner almost double the amount he’s used to, and as you can see by that wayward quadrant outside the zone he’s not getting there as much as he’d like. And he’s not getting inside as much as he’d like. Overall, he’s throwing his four-seam for a strike the same percentage as he used to, but the different allocation for him has been a struggle.

But when Q falls behind, it’s a different story. Throughout his career, Q threw his four-seam 53% of the time when he fell behind a hitter, trying to get back into the count as easily and quickly as possible. But this season, he’s halved the amount of fastballs behind in the count and almost tripled the amount of sinkers he’s throwing, from 22% to 55%. He’s seen a drop in whiffs on that sinker, from about 6% to 4%, and it might be because hitters must know it’s coming at this point.

Obviously, most damage against any pitcher comes when they’re behind in the count. For his career, hitters slashed .290/.431/.479 against Q when they got ahead of him. But this year, he’s getting absolutely mullered when behind: .327/.522/.633. That’s just antisocial is what that is.

I’m not here to tell you Hickey’s approach or advice is wrong. It may just take a while to click. But the learning curve has been steep.

Again, this isn’t meant to indict Hickey totally, but these were successful pitchers before he arrived. And they’re clearly changed their approach overall, and especially with runners on base. And the results look like a crime scene that MCU or the FBI would take over from the local detectives for. Let’s watch and see if they go back from here.