Thursday evening, the Cubs made their move. Well, they at least made a move, acquiring lefty Cole Hamels from the Rangers in exchange for Eddie Butler and 23-year-old Myrtle Beach righty Rollie Lacy. As Sam Fels cautioned in his trade reaction yesterday, the Cubs aren’t getting the Hamels who threw a no-hitter at Wrigley Field in his last start with the Phillies, and they’re definitely not getting the Cy Young contender from seven years ago. This isn’t an acquisition that’s going to move the needle much for the Cubs over the next two months, nor in October.

However, I think this trade is pretty damn interesting, and definitely fun. Let’s start with the latter: Hamels has always been a fan favorite in Philadelphia, in no small part due to his playoff heroics at the very beginning of his career, but also because of his wry, but somewhat hammy personality. In Texas, he became friends with Yu Darvish, and his facial hair-growing abilities endear him to this mustachioed author. It appears as though he’ll fit well with the Cubs clubhouse, and that’s always good for an in-season acquisition.

The “how he has actually pitched” portion of this trade is more complicated, I suppose, but in some ways it’s very simple. The Cubs sorely need pitching depth right now, with Darvish making progress on a cautious timetable, and the rest of the rotation struggling to enter the sixth inning most starts. The bullpen has been taxed of late, even with the recent All-Star break’s opportunity for rest, and Joe Maddon has resorted to some strange, desperate moves like using position players to pitchin a 7-1 game and going to the struggling Brian Duensing in a one-run game in the fifth inning.

Hamels will help eat some innings over the next two months, mitigating some of the fatigue and injury concerns that could derail a Cubs postseason run. It remains to be seen whether the veteran lefty will replace Mike Montgomery, replace Tyler Chatwood, or become the final starter in a unique six-pitcher rotation, but the presence of Hamels is meant to aid Maddon and co. in their pitching management down the stretch. To that end, Hamels has thrown 114 ⅓ innings this season over 20 starts, and he has only thrown fewer than five full innings once (July 7 at Detroit, when he allowed seven runs and secured only two outs). Last season Hamels started 24 games for Texas, and that was the first season in which he started fewer than 30 games since 2007. Despite having nearly 2500 major-league innings on his arm, Hamels seems as durable as ever.

The bigger question, though, is whether Hamels is going to give the Cubs anything resembling quality innings. At first blush, the answer is no: he sports a 4.72 ERA this year, after finishing with a blazin’ 4.20 ERA last year, and his 6.26 DRA is 40 percent worse than league average. His groundball rate is the lowest it’s been since 2012, his WHIP is the highest it’s ever been, and he’s allowing home runs at a career-high pace. His 20.7 percent home run per flyball rate is, by far, the worst of his career. The numbers… they do not inspire confidence.

There are some stats that could portend some success at Wrigley and on the road for the rest of the season, though, so let’s find that silver lining. Hamels boasts a solid strikeout rate at 22.7 percent, just about league-average, and his 8.4 percent walk rate is just below the league average. For the Cubs, who have had trouble both missing bats and keeping hitters from working free passes, Hamels could be a steadying presence.

Similarly encouraging is the severe home/road split that Hamels carries through 20 starts. In 10 home starts, he’s thrown 59 innings and allowed a whopping 16 home runs, resulting in a 6.41 ERA. In 10 road starts, Hamels has thrown 55 ⅓ innings and allowed only seven home runs on the way to an impressive 2.93 ERA. As we’ve learned with the Tyler Chatwood Experience, home/road splits are only so instructive if a pitcher kind of… well, sucks, otherwise. With Hamels, there appears to be a stark enough difference and a recent record of success, or at least mediocrity, that indicates a great likelihood of future success than there was with Chatwood.

Our final data regarding Hamels that might be helpful in imagining what he will do in a Cubs uniform is the most granular: pitch usage, sequencing, and tunneling. Much has been made of Hamels throwing more cutters since he was traded to the Rangers, and he’s become more reliant on that pitch, in concert with his four-seamer and curveball, than he was in the past. Interestingly, his cutter has lost a few ticks in velocity even as his other fastballs have remained steady, perhaps contributing to that pitch’s success this season. Whereas last season he induced whiffs on eight percent of cutters thrown, this year he’s nearly doubled that rate, which now sits at 15 percent. He’s throwing it for more strikes, too, which is important considering the Cubs’ strike-throwing woes.

The cutter’s success has come at the detriment of the four-seamer, but considering his good walk and strikeout rates, I think Hamels has made a fine tradeoff. Hitters are mauling that four-seamer, by the way, to a .427 ISO, and nine of the home runs Hamels has allowed have come on that pitch. It’s an identifiable problem that pitching coach Jim Hickey or run prevention coordinator Mike Borzello could address.

As for his other pitches, Hamels remains solid. His changeup has always been good, and his new slider gives hitters different looks (especially important if his cutter is his primary pitch). A quick glance at his pitch sequencing on Baseball Prospectus reveals a very democratic assortment of pitch pairs to right-handed batters, and such a mix seems to benefit a crafty lefty like Hamels. When split for batter handedness as well as pitch type, he’s thrown 20 more types of pitch pairs this season than in 2017. With only two months of the season remaining, I expect the Cubs to tinker with his pitch mix to maximize his effectiveness—the chances of Hamels facing a team twice in 10 or so starts is slim, so variety is probably a bit less important—and this is where I expect Hamels to make improvements if he is to succeed in Cubs blue.

One last thing to keep an eye on is the uptick in velocity that Hamels has experienced this season. For the first time since his All-Star 2016 campaign, Hamels is throwing his four-seamer at an average of 93 mph. 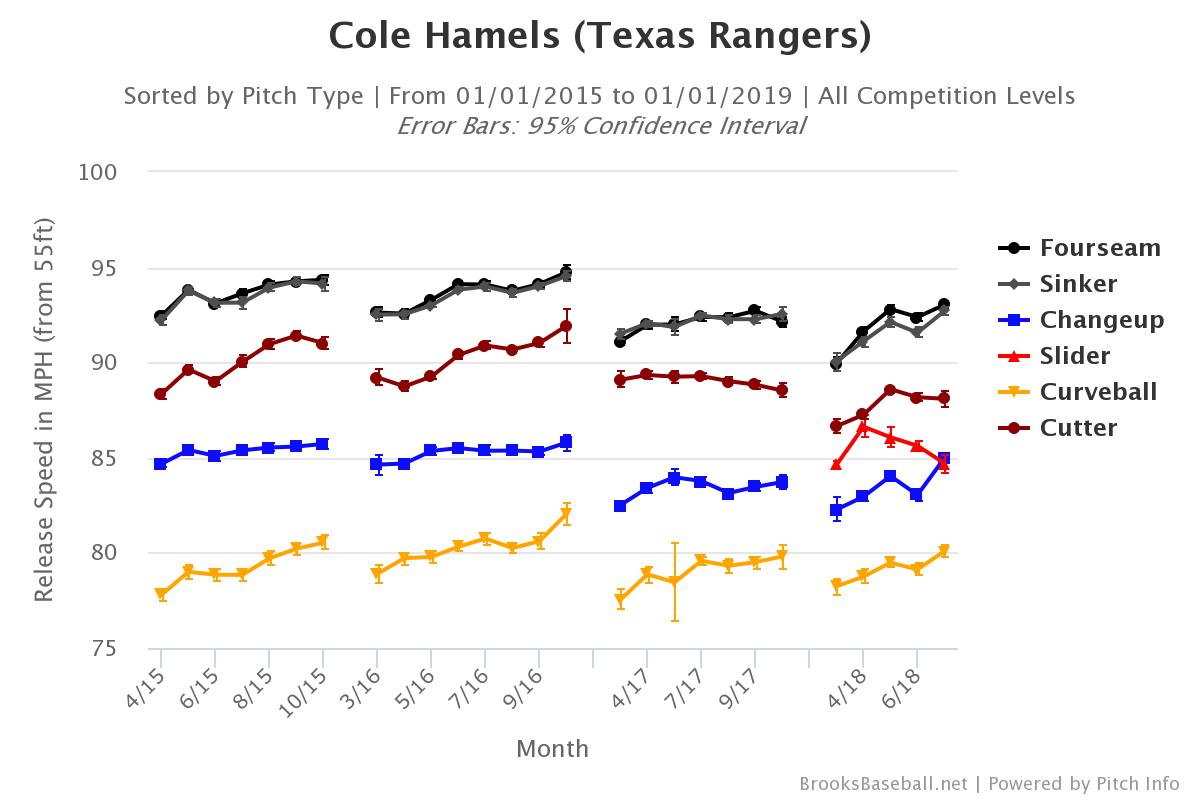 His other pitches, save his cutter, have also crept up in velocity this season after significant drops in 2017. It remains to be seen whether this is sustainable, or even a possible precursor to injury, but it’s worth monitoring as Hamels takes the mound for the Cubs.

Overall, I wouldn’t hold my breath that Hamels will contribute significantly in terms of quality between now and October. Will getting him out of Globe Life Park help? Probably. But it’s just as likely that Hamels posts an ERA north of five in the 10-12 starts he makes between now and the end of September. The good thing for the Cubs is that Hamels lets them rest their bullpen a bit more, allows Darvish take his time getting healthy, and provides more options when the team has to make decisions about what roles Montgomery and Chatwood will fill going forward. With Milwaukee unlikely to make an impact move to bolster their rotation, the Cardinals and Pirates miring around .500, and the National League playoff picture wide open, the Cubs can afford to prepare themselves for October as long as they maintain a solid division lead.

Zack Moser
Zack is a history graduate of the University of Illinois, Urbana-Champaign, currently living in Boston. His writing has been published in Black Ball Journal, Cuban Baseball Legends: Baseball's Alternative Universe, and Baseball Prospectus. You can find his stranger thoughts at BP's Short Relief.
read more from Zack Moser