It’s easy to forget that Yu Darvish is on the Cubs, and he will be an important part for years. Having eight starts in a season will do that. Not being around when all the drama hit in September is another. The little nugget that only three of those eight starts were any good is probably another. After Alex Rodriguez’s soliloquy of the rumors in his own head died down, and then it became official that Darvish was really hurt and not just putting on airs that A-Rod put forth for clicks, it all just kind of went away.

But here’s the thing. Darvish’s presence, assuming a return to health, probably gives the Cubs the best rotation in the National League next year. Whatever projections come in the winter will be based on that. Which is why you could roll this team out again next year as is, and with better health they could win 100 games. Yes, it’s true, it’s damn true.

Let’s have a scope, shall we?

Year In Review: Ok, so the numbers are ugly. Throw in the injury problems, and it’s pretty much disaster. Not that Darvish was the only Cubs starter who struggled with walks, at least early in the year. Jon Lester, José Quintana, and Kyle Hendricks all had their problems at various times, and then there was the performance art of anarchy that was Tyler Chatwood. It was kind of a staff-wide problem, not that that excuses Darvish.

You can also throw out just about all of these numbers.

The walks are an aberration. Darvish hadn’t come close to walking hitters at that rate since his rookie year of 2012. His career-mark is 3.4 BB/9, and he’d been at 3.0 or below the previous four seasons. We don’t know what role the injury played in Darvish’s lack of command, and we won’t, but we can safely guess it had some role.

Another problem was the 1.58 HR/9 he was giving up, a career-high by some distance. His career average was 1.02. So what was going on there? Can we dismiss that just as easily?

There isn’t much to suggest that Darvish wasn’t suffering from the same kind of bad luck that was plaguing Kyle Hendricks earlier in the season. He just had an inordinate amount of fly balls ending up over the wall. Because Darvish wasn’t giving up any kind of different contact—be it hard or soft or on the ground or in the air—than he had in any of his previous seasons. He gave up slightly more flies than his career average—39.6 percent to 37.1 percent—but that’s not a huge difference. In fact, on flyballs alone, Darvish gave up significantly less hard contact than he did in 2017: 32.5 percent from 38.6 percent. He just might have gotten a raw deal.

But it can’t be as easy as simply cursing the gods for their callousness and deviousness. There was a change in repertoire, though it was sort of a continuation of what came before. When Darvish was taking the mound, I and several others remarked that he seemed to just be sticking with his fastball and slider, even though we know Darvish can and used to throw every pitch under the sun. He threw his four-seamer this past season 37 percent of the time, and his slider 23 percent. His cutter is listed at 13 percent, but really Darvish’s cutter is just a baby slider. As far as any offspeed stuff, Darvish basically eschewed it at all. Hardly any curves, changes, or splits, though he never really has thrown any of those a lot. He has thrown his curve near 10 percent of the time before, but that hasn’t been anywhere near the case in the past two seasons.

Perhaps a tad worryingly, his slider lost movement, both across and down, last year: 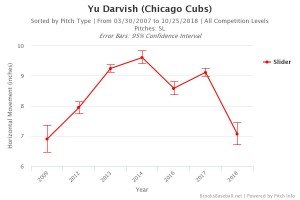 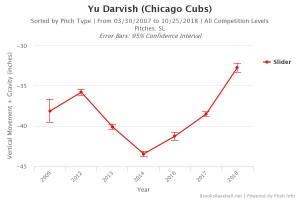 Now that could be because of the injury. It could be just one of those things. But it was losing depth the past couple years, and he’ll have to find it again to be successful. Or he must go with a curve, change, or split, all of which he’s thrown in the past.

Looking Ahead: No one expects anything other than Darvish showing up for spring training on time and healthy. No one has said the injury he had is going to linger. So as far as we know, we’ll be getting full-strength Darvish. And what you forget is that if we were coming off 2017, that would make him the best Cubs starter, including Cole Hamels. That’s how good he was and has been for most of his career.

Darvish’s 2017—in terms of DRA or WARP—was only bested by Hendricks in ’18. The Cubs are going to get a #2 starter, at worst, that they really didn’t have at all in 2017. Yeah, there’s a huge “if,” which is his health and the smaller one of some of his number returning to his career norms. But those don’t seem to be huge questions either.

If Hamels really did find something here that he lost in Texas and can replicate for a full season, the Cubs will have five starters who are no worse than #3s, even if none of them are truly #1s. I’d say that’s a pretty good place to be.