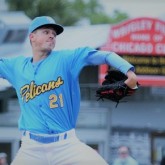 Don’t judge the Cubs’ MiLB system on its April won-loss record. Instead, it should always be about development. And for April, several players came up strong like we thought they would. Dakota Mekkes did not allow a run. Alex Lange flashed not one, but two types of curves. Austin Filiere and Jared Young both showed […]