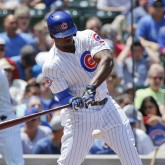 Jorge Soler suffered a left hamstring strain while running to first base during Monday’s game against the Phillies. That story is, unfortunately, a familiar one for Cubs fans at this point. The young, promising slugger only recently appeared to be emerging from his early-season doldrums with one of his patented hot streaks, and Cubs fans […]