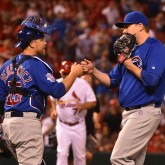 Very few people would confuse Tim Federowicz for Jonathan Herrera, at least up close. But if you look from a distance and squint a bit, you might just see the resemblance. Herrera, you’ll recall, spent the entire 2015 season on the Cubs’ big league roster despite making it into just 73 total games and starting […]