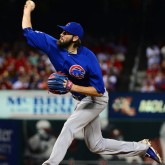 On Sunday afternoon, Theo Epstein released a statement explaining that the Cubs had bought out Jason Hammel’s 10 million dollar option for next year. The statement, in full, is copied in the tweet below: The #Cubs today announced that the club has declined the 2017 option on Jason Hammel’s contract. pic.twitter.com/sJ22n2VQ8N — Chicago Cubs (@Cubs) […]