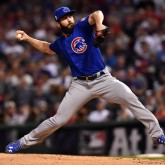 Pose the question in September 2015, and it’s a laughable one. Jake Arrieta’s long-term status was not in question at that point, and even into the 2016 season, he remained entrenched in the future plans as far as Cubs fans were concerned. But his slightly wobbly regular season—he put together quality numbers on the whole, but […]