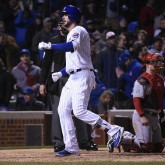 Heading into Wednesday night’s game at Wrigley Field, Alfredo Simon held a 4-0 record and 1.66 ERA in 15 career appearances against the Cubs, including five starts against Chicago during his previous Reds stint in 2014. Not that we needed more evidence of this, but Wednesday’s results suggested this Cubs team has very little in common […]