For reasons that I cannot fully comprehend—and of whose nature little, in fact, is known to modern science—I have carved out something of a niche for myself on this site in profiling the more anonymous members of the Cubs’ pitching corps, shortly before their fortunes decline. See, for example, my hard-hitting exposé on Brian Schlitter, whose second demotion of the season looms. Or read, if you have the time, my cutting analysis of Zac Rosscup’s slider, which has picked up quite a bit of zip this season but which has noticeably lost effectiveness since I wrote my piece. And if those two aren’t enough for you, feel free to read my profile of reliever Anthony Varvaro, a Cub whose tenure with the team was so short that Andrew Heaney, whose time with the Los Angeles Dodgers this offseason lasted all of five hours, would no doubt feel that Varvaro got the short end of the stick.

I guess my point here is that I enter into the present exercise—a profile of soon-to-be Cub Tsuyoshi Wada—with some trepidation. Although highly unlikely, it is strictly speaking not entirely outside the realm of possibility that each Cubs’ hurler whom I profile is, thereafter, doomed to inneffectivess and decline. For the moment, I’ll simply file that possibility into the back of my mind and proceed with caution, but please keep it in mind if Wada, who has been good if not excellent at Triple-A this year before his inevitable call-up to fill Travis Wood’s starter spot, serves to continue the trend.

Wada, 34, was acquired by the Cubs as a free agent during the 2013-14 offseason after a two-year career with the Baltimore Orioles in which he never threw a major-league pitch, rehabbing instead from Tommy John surgery and putting up middling numbers with the Orioles’ Triple-A affiliate in Norfolk. That Orioles’ career followed a good but not great NPB career which was, however, concluded by an excellent 2011 season in which Wada put up a 1.51 ERA over 184.2 innings pitched. Both times he signed with major league clubs—in 2011, and again in 2014—I imagine that that’s the performance they were after.

In his debut with the Cubs last season (which served, as well, as his major-league debut) Wada performed reasonably well on traditional metrics over his 69 1/3 innings pitched, to the tune of a 3.25 ERA and a 3.75 FIP. More sophisticated metrics, however, suggested that these numbers were, at best, average (cFIP of 100), and possibly a bit below that (DRA of 4.46). That last number—the DRA—is sort of what you’d expect, actually, because one of the things you should know about Wada is that he doesn’t throw very hard at all, and his pitches don’t move very much. These are not things that are usually true of major-league quality pitchers, but they are true of Wada. Specifically, Wada’s fastball velocity ranked in the bottom 15 in the National League (min. 60 IP) last year, his velocity on his slider ranked in the bottom 20, and the vertical movement on his curveball was in the bottom 15.

So how does he get by with pitches that (a) aren’t very fast, and, (b) don’t move very much? Well, let’s take a look at his pitch mix, organized by velocity: 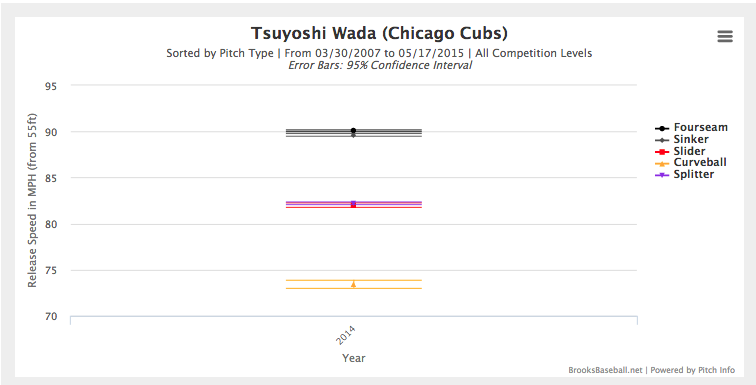 Wada appears to have five pitches: a fourseam fastball, a sinking fastball, a slider, a curveball, and a splitter. But, check it out: the sinker and the fourseamer have essentially identical velocities, as do the slider and the curveball. They are differentiated, of course, by their movement, and here’s where you can get a glimpse of how Wada is able to maintain reasonable success against big-league hitters. First, here’s Wada’s pitch mix, sorted by vertical movement. You’ll notice that the slider and the splitter remain undifferentiated, but the four-seam and the sinker separate by over two inches. 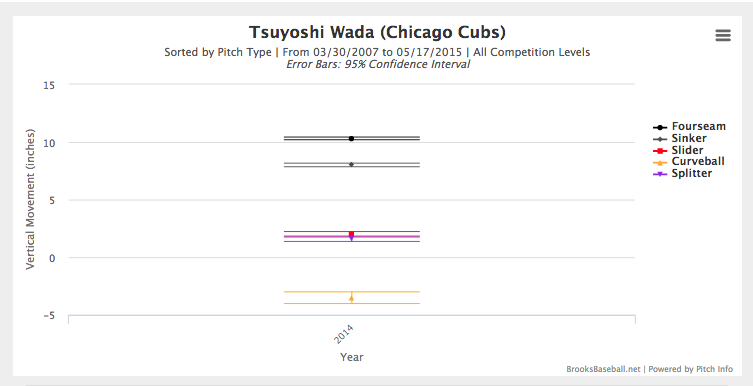 When you look at the horizontal movement of his pitches, you immediately see a distinction of nearly nine inches between Wada’s split-finger and his slider, and an additional degree of differentiation between the fourseam (which cuts a bit) and the sinker (which does not): 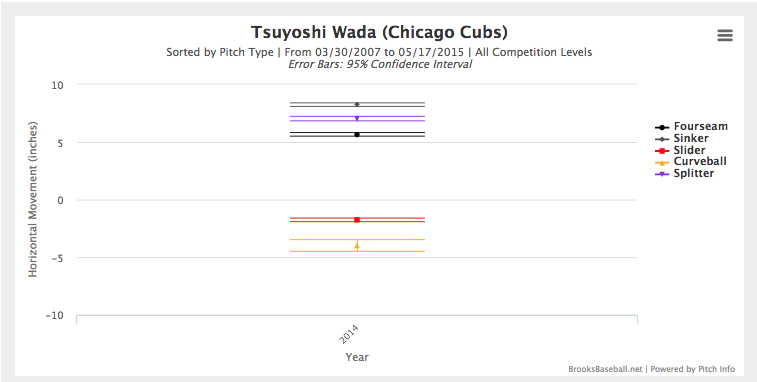 If Wada, who has been rehabbing from a hamstring injury so far this season, is going to remain successful with stuff that is well below big-league average, he’s going to need to maintain the relationships you’ve seen in the previous three charts. One of the keys to getting really good hitters out—and all big-league hitters are, in an absolute sense, really good—is to limit their ability to differentiate between pitches as they come out of the hand. By maintaining a five-pitch arsenal, two pairs of which have identical velocities coming out of the hand, Wada has been able, to some degree, to mitigate his lack of pure “stuff” by keeping hitters guessing. Whether he can continue that trend, or whether hitters counter-adjust, is a matter for the future to determine.

Tags: Tsuyoshi Wada |
Rian Watt
Follow @rianwatt
Rian is the editor-in-chief of BP Wrigleyville, an author at Baseball Prospectus, and a contributor at VICE Sports and FiveThirtyEight. He's based in Boston, and misses Chicago every day.
read more from Rian Watt