Last week, 10 of us here at BP Wrigleyville answered the question, “Who or what is the harbinger of Cubs’ offensive success?” Basically, we all honed in on a specific player, explained why he needs to start hitting the damn ball, and how, if he does, the rest of the offense is sure to follow. It was a fun exercise that highlighted the Cubs’ general offensive futility thus far. To wit, the Cubs have hit .240/.317/.376, good for a .261 TAv that is tied for 15th in the majors and ninth in the National League.

An apparent Beer List trend was the need for the Cubs, as a whole, to tap into their slumbering power. That .376 slugging percentage is, amazingly, the fifth-worst mark in the majors, ahead of only the Braves, Mets, Marlins, and Padres. The team has hit 100 homers, 16th in the majors, and their ISO is .136, good for 22nd. On a team featuring the big bats of Anthony Rizzo, Kris Bryant, Jorge Soler, and (recently) Kyle Schwarber, these numbers are actually a little shocking. The Cubs’ current profile as “Starting Pitching Juggernaut with Great On-Base Skills and Middling Power” is a far cry from general preseason expectations, which landed closer to “They’ll Score Runs Because of OBP and Homers but, about that Pitching…” So, why have the Cubs seemingly underperformed in the power department?

To approximate the Cubs’ power struggles, we can turn to PECOTA’s preseason slugging projections and compare the Cubs’ key contributors’ expected slugging versus their actual slugging. 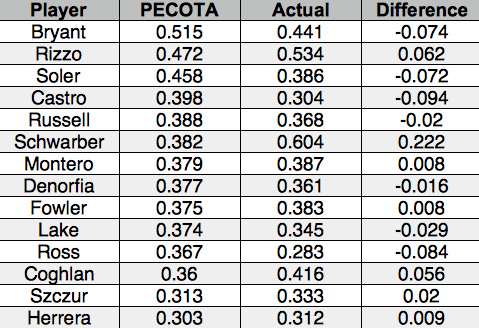 One can see that the power expected from a few of the Cubs’ youngest hitters hasn’t quite shown up in games the way we expected. Bryant sports a .441 slugging percentage and a “paltry” 15 home runs, clearly not bad totals, but a few shades shy of most preseason projections that pegged him for 30-plus on the year. Similarly, Soler has managed a meager five homers and a .386 slugging percentage. Those five homers match his total from last season, which he reached in over 200 fewer plate appearances. Those totals from the Cubs’ current five and six hitters will likely improve as Bryant adjusts to the low strike and Soler turns his high line-drive percentage (29.9 percent, the highest of any player with at least 300 plate appearances) into laser home runs, but neither is necessary for the Cubs’ power numbers as a whole to turn around. Overall, Bryant, Soler, and Starlin Castro are significantly undershooting their projected slugging percentage.

As a corollary to power scuffles from those key hitters, Addison Russell and Kyle Schwarber are getting many more at-bats in 2015 than predicted. Both call-ups were mild surprises necessitated by injuries, and expectations for their overall production should be tempered by their near-skipping of Triple-A. While Schwarber has lit up major-league pitchers for a .341/.429/.604 line, his slugging percentage propelled by six homers, Russell has understandably struggled at the plate for a majority of the season. His overall .240/.302/.368 line is actually the result of a better post-All-Star break performance in which he’s posted a 102 wRC+, but his ISO has remained static over his best stretch, at .128 both before and after the break. Russell has garnered 351 plate appearances so far, totaling seven home runs.

Despite these somewhat lackluster numbers from everyone but Rizzo and Schwarber, it doesn’t seem to be the young hitters who are dragging the Cubs’ power numbers down. Rather, the chief cause of the Cubs’ power struggles appears to be the general impotence of their bench until recently. Due to injuries to Tommy La Stella, Javier Baez, and Mike Olt, the bench has featured such world beaters as Jonathan Herrera and Mike Baxter for a majority of the season. Combined with a tendency to carry 13—and at times, even 14—pitchers, plus David Ross as the backup catcher, this means that the Cubs haven’t had a thumper off the bench all season. To put it into numbers: Ross, Herrera, Baxter, Junior Lake, Chris Denorfia, and Matt Szczur have five home runs in 599 plate appearances, a prolifically bad power performance for the six guys taking most of the Cubs’ bench PAs. Excluding Schwarber, who has assumed a starting role, the Cubs’ position players with the ninth through 20th most plate appearances have hit a mere eight home runs, and that’s including former Cub twice-removed Welington Castillo’s two homers.

The good news is that the situation will get better, and soon. The club is nearing its optimal lineup construction, with Miguel Montero back from his injury and Schwarber starting nearly every day. Castro has found himself the odd man out, but his presence on the bench is a theoretical strength. For the recent four-game set versus the Wild Card-chasing Giants, Joe Maddon was able to run out the best hitting lineups of the season.

“We’re presented with a new set of circumstances based on personnel,” Maddon said when he relegated Castro to the bench, and those circumstances are such that the power issue should begin to resolve. Even without factoring in Maddon’s roster playfulness, PECOTA projects the Cubs to actually hit the best of any NL Central team the rest of the season, including a .423 slugging percentage that would far outpace their slugging to date. That projection assumes a lineup featuring Castro at short and Schwarber behind the plate, so it’s reasonable to think of it as conservative; with Schwarber, Montero, Coghlan, and Russell all starting, the club’s power production is due for a bump. Maddon’s willingness to innovate with personnel will likely deserve some credit if the Cubs’ power production approaches expectations over the next two months. Even if Bryant doesn’t turn on the light-tower power before season’s end, the shoring up of the entire lineup with the addition of Schwarber and subtraction of Castro is significant.

We’re approaching a fully operational battle station on the North Side, and I expect the Cubs’ power numbers to improve as August turns into September and the club positions itself for a playoff run.