Last weekend was an exciting one for the Cubs, sweeping the Giants and firmly establishing their claim as the team to beat for the last NL playoff spot. They certainly made it interesting, with James Russell and Jason Motte combining to turn a mop-up game on Saturday into something interesting, and Hector Rondon giving every Cubs fan cause for panic in a true nail-biting finish on Sunday. There’s really no arguing the strength of the starting pitching, and while the numbers place the Cubs’ bullpen in the upper half, concerns are certainly warranted.

My former colleague at Beyond the Box Score (and current contributor to BP Boston), Ryan Morrison, wrote a post last year on one method to evaluate relief pitching. He suggested using run expectancy based on the 24 base-out states (RE24), a context-neutral stat that only cares about what the pitcher does irrespective of the game score. While there are solid arguments to be made for using context-specific stats like Win Probability Added (WPA), the ultimate goal for any pitcher is to get the batters he faced out, regardless of the game score.

All data that follows is through the games of Sunday, August 9th, and it’s going to get a bit chart-y. This first chart shows Hector Rondon’s RE24 by game, keeping in mind that games above zero (the blue bars) are those in which he was effective, and games where he was below zero (the red bars), he was less than effective: 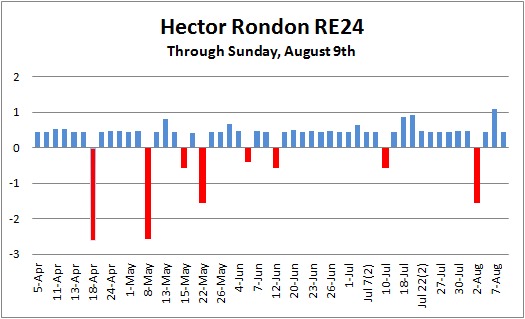 All in all, not a bad picture for someone who’s been consistent with brief stretches of bad—such as those two blown saves to the Pirates and Diamondbacks in May—but since then, he seems to have settled down. Even the Sunday game shows a positive outcome, masking the fact he loaded the bases prior to working out of that jam. This is where WPA can play a role—going into the ninth when he entered the game, the Cubs had a 93-percent chance of winning. This is how Rondon finally got that save: 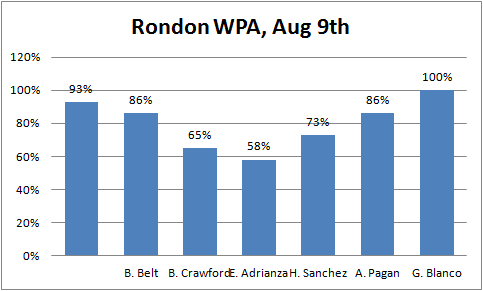 Putting three baserunners on takes a toll on WPA, so despite what the RE24 graph depicts, things aren’t necessarily all rosy in the closer spot. I created a Tableau data visualization that shows all the pitchers mentioned in this post which breaks down each appearance by plate appearance and the individual RE24 for each one to show the see-saw nature that pitching in the late innings is. When Rondon’s stuff is on, like it was on Thursday and Friday, he’s virtually unhittable. The question is how often this can be counted on, particularly as the pressure increases.

The issue isn’t really Rondon—he’s going to be a major part of the bullpen barring drastic changes. These charts show the RE24 for Jason Motte, Pedro Strop and Tommy Hunter: 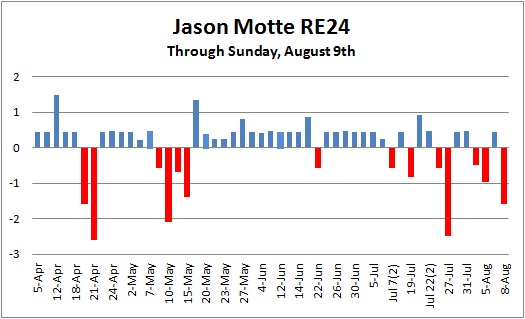 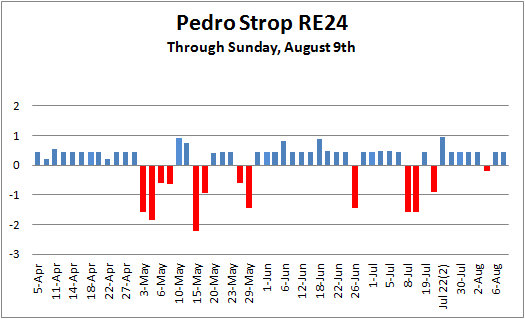 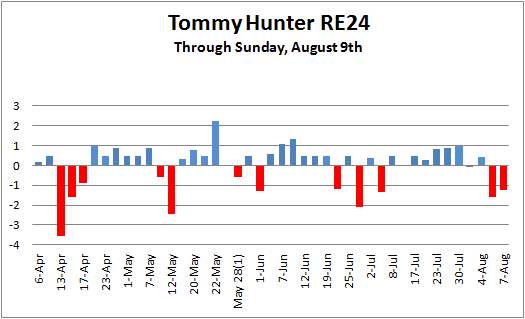 All of a sudden, there’s a lot more red bars, and refer to the Tableau data viz for further breakdown. In 2015, teams need more than a closer. Even the modern exemplar, the Royals, have to supplement the 7-8-9 group of Kelvin Herrera, Wade Davis, and Greg Holland with other pieces. For the Cubs, throw in James Russell and Justin Grimm, and it’s fair to ask if their bullpen is up to the task.

Chances are I could show similar charts for just about every team with playoff aspirations and find similar results. Part of it is the nature of the game—there will be failure, and as Cubs fans, we’re all far more attuned to their failures than others. Part of it is the flaky nature of pitching in general, and relief pitching specifically, in that there are days when pitchers will be successful and some when they won’t, and rarely with rhyme or reason as to why this occurs.

If the Cubs can count on the bullpen to perform at its peak, they’ll be fine, a truly courageous statement that can be applied to every other team in baseball. The issue is more how realistic this expectation is. Consider these two mystery relief men: 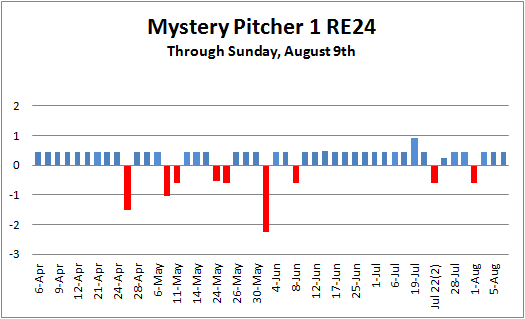 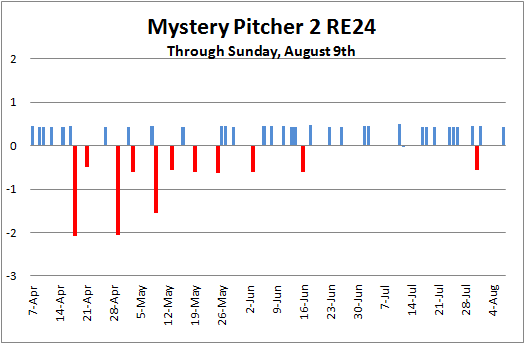 Not too bad, essentially similar to Hector Rondon’s chart with far more successes than failures. These two pitchers are Aroldis Chapman and Craig Kimbrel, respectively, pitchers who were allegedly available at the trade deadline. There was serious chatter about trade discussions between the Cubs and Padres, but I have no clue if Kimbrel was part of those talks. It’s a pipe dream to believe the Cubs can acquire either of them this year, since I have difficulty believing either would clear waivers, but stranger things have happened. This link shows the rules for deals made after the trade deadline—again, possible, but unlikely. Then again, I wrote at a different site that David Price was going nowhere about week before he was traded.

I personally was disappointed to hear of no overt attempt to acquire Chapman, but I’m sure there were discussions and the price was high—really high. There’s little I enjoy more than sharing this link of the Statcast leaders for fastest pitches this year, and the thought of Chapman closing out meaningful games in August, September, and beyond made me giddy. He has another year of arbitration eligibility for 2016, so the Cubs wouldn’t even be on the hook for him long-term, but it’s most likely not going to happen.

There is a chance the Cubs could pick up small pieces like Tommy Hunter, but doubtful they can obtain a big name who would make a material difference. They’ll go as far as the six relievers they have now will take them, especially if they continue to rack up one-run games. They have a total of 18 games against the Cardinals (6), Pirates (6), Dodgers (3) and Giants (3), which also means they have 34 games against less-than-stellar talent.

In every sport, fans believe that if teams are outstanding in one area and merely average in another, they’ll be in contention. This is a gross simplification, and for now, the Cubs are probably slightly above average on offense, slightly below average on defense, with above-average starting pitching, and average relief pitching. That’s a tricky equilibrium to maintain, which leaves little margin for error in any facet. The Cubs are on a nice stretch of games, and generally speaking their bullpen has been effective. But it needs to stay that way, and past performances suggests this is in no way guaranteed.