The Cubs have made a big statement, through their actions over the last few years, about their commitment to building the organization internally, both through player development and by trading for young, cost-controlled players. This strategy has resulted in the team drafting, signing, or trading for young, budding stars such as Kris Bryant, Kyle Schwarber, Jorge Soler, Addison Russell, and Jake Arrieta. These are the names everybody knows.

But there are other names. I would argue that one of the Cubs’ most underrated moves to date is the signing of Chris Coghlan to a minor-league deal worth $800,000 (plus $250,000 in potential bonuses) in January 2014. Coghlan was called up on May 5 of that year from Triple-A Iowa, and since then has hit .268/.345/.438 in a Cubs uniform. His 4.6 WARP the last two seasons has him tied for tenth in Major League Baseball among left fielders (minimum 600 plate appearances), ahead of guys like Matt Holliday, Nori Aoki, and Corey Dickerson.

But Coghlan’s value for the Cubs is evolving beyond just that which comes from being their every day left fielder. Just before the All-Star break, catcher Miguel Montero jammed the thumb on his catching hand, necessitating that the Cubs bring up big-time prospect Schwarber. Since his call up, Schwarber has been insane at the plate, posting 1.6 WARP over his first 101 plate appearances, and a ridiculous slash line of .352/.436/.625.

Now that Montero has returned, however, the Cubs have the enviable problem of finding playing time for everyone involved. With a record of 63-48 and a 3.5 game lead in the second Wild Card spot (both as of August 11), the Cubs can no longer afford to worry about hurt feelings, service time, or developing Schwarber’s catching skills in the minor leagues. The number one goal is making the playoffs, and everything else takes a back seat.

Back to Coghlan, who (luckily for him) has prior experience playing other positions. Although he’s played only sporadically at second base, third base, center field, and right field in his six-year career with the Cubs and Marlins, he did log 246 games in the minors at second base and 51 at third base, so these spots aren’t completely foreign to him.

Lately, Cubs manager Joe Maddon has tinkered with playing Coghlan at second base, moving Russell over to shortstop, putting Schwarber out in left field, and starting Montero at catcher. This has displaced Starlin Castro, who has struggled all season at the plate. Even with a small sample size alert, it’s easy to be impressed by the results of the new lineup so far—the Cubs are 5-1 when Coghlan starts at a defensive position other than left field—and I thought it was worth taking an extra look at just how viable it might be to have Coghlan playing other positions on a full time basis.

So I started looking at the Cubs batters at the plate this season and how well they’ve created runs there, versus how the same players have done in the field at their (sometimes many) defensive positions. I wanted to be able to get at an objective sense of which lineup has the best production, when factoring runs created on offense and runs saved on defense. To some extent, of course, this is impossible—there are thousands of factors which play into lineup construction. But it’s a start.

For a more precise measurement than “the eye test,” I used each player’s wRC (weighted runs created) and DRS (defensive runs saved) to figure out the net runs that each player is worth on a given day, depending on what position he is playing. I used wRC rather than the more commonly cited wRC+ because of the nature of the statistic. While wRC+ is adjusted for park factors and includes a baseline of 100 for league average players, wRC is based on wOBA and is represented as a single number, such as “player X was worth 50 runs created in 2014.” DRS is represented in the same way, as single number that could be divided by games played or total innings.

There were a few stumbling blocks in my quest to determine the optimal Cubs lineup. First, Coghlan doesn’t have a substantial amount of time at any position other than left field this season, so career numbers had to be used for calculations at third base and right field. Second, there is an extremely small sample of data for Coghlan at second base, so I had to project what I think his DRS would be. According to Fangraphs’ scale, -15 represents an “awful” fielder at any position, so I figured this was probably fair. Your mileage may vary.

I ran all of the numbers for each of the significant players at each position where they may see playing time, and soon I found the following beautiful array of decimals: 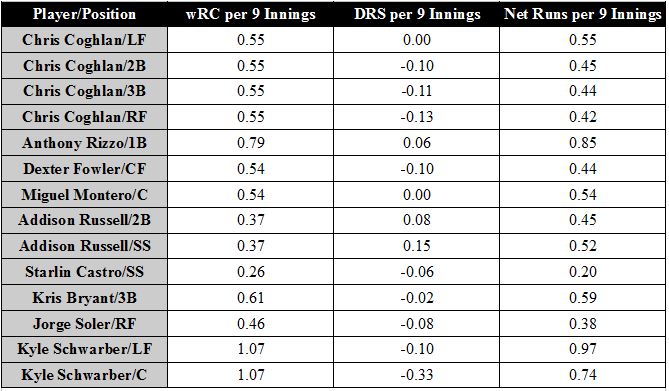 Ok, there are a lot of numbers here. Before we break them down, one quick note: the biggest thing that jumps out are Schwarber’s extremely high wRC/9 innings and extremely low DRS/9 innings as a catcher. While I toyed with the idea of attempting to use projected numbers for him going forward, I decided that using 2015 hitting stats to date for everyone is the best route. While Schwarber’s production in the final 50 or so games is likely to drop, you could make a similar argument for anyone on the roster, and so it didn’t seem to make sense to adjust it.

On to the breakdown. Here are the notable things I found in my research: First, if you add up the wRC/9 for Montero, Rizzo, Russell, Castro, Bryant, Coghlan, Fowler, Soler, and the combined starting pitchers, you come to an average of 3.95 runs created per game. The Cubs, on the season, are averaging 3.90 runs per game as a team. So, off the bat, it appears that I’m on the money—or at least in the general area of the money—with the offensive portion of the equation.

It’s harder to prove the validity of the defensive portion, and again some projections were used in cases where a decent sample size was unavailable. But when the two stats are added to create a “net runs per nine innings” statistic, I found that the most optimal lineup is the one Maddon has written on the lineup card most recently:

That’s nice to see, and suggests (if we didn’t know it already) that Maddon is a pretty good manager. For a comparison, here is the most frequent alignment that the Cubs have employed this season:

The difference in the net runs is staggering; having Schwarber in the lineup makes a huge difference. For the net runs in the first lineup to drop to the level of the second lineup, Schwarber’s wRC/9 would need to drop to 0.39 (assuming his fielding prowess in left field doesn’t change in any way from the current projection). For comparison, Russell’s wRC/9 on the season is 0.37, and it’s not very good. Russell has hit just .240/.302/.368 with a .292 wOBA this season, so suffice it to say Schwarber’s offensive production would need to fall off a cliff before it would be worth moving him out of the lineup.

I don’t believe this model to be perfect, but I think it’s a good starting point. If nothing else, it creates an outlet for some degree of objective comparison between different defensive alignments. In the immediate present, for the Cubs, it appears that Coghlan at second base and Schwarber in left field might not be quite the disaster that some thought it might be, given the offensive production that makes up for the defensive problems.