Year in Review: Soler’s season was defined by something that may have escaped casual fans: remarkably consistent output. Unfortunately for the Cubs’, his consistency did not translate into overly meaningful contribution (until the playoffs). Before we evaluate his hitting, baserunning, and fielding in-depth, let’s put to bed the “Soler can’t hit in cold weather” narrative so often bandied about:

His best months by far were September/October, and his April was right in line with his season performance. Further, the warmest month on average—July—was easily his worst. Got it? Good. Perhaps there is something to be said for Soler’s struggles in the type of weather he experienced in New York during the playoffs, but if Soler struggles next April, it shouldn’t be simply brushed aside by saying, “He’ll heat up as the weather does.” It’s not as simple as that, it rarely ever is.  Now, on to the good stuff.

Soler’s main calling-card in 2015 was his elite 92.4 average mph exit-velocity rating (21st overall in MLB, first on the Cubs). In short, few players, when actually making contact do so in such an impressive fashion as Soler. The issue here is just that though: frequency of contact. Let’s divide his season between pre-injury and post-injury to see what progressions were made in his ability to make contact and get on-base:

The eye-test certainly made it appear that late-season adjustments were made to avoid off-speed pitches outside of the strike zone. While the pre/post-injury slash line does not necessarily tell you this, digging slightly deeper into his walk and strikeout ratios does bear this out as fact, as meaningful improvements in each area were achieved. His unsustainable pre-injury BABIP of .383 perhaps skews the comparison to his post-injury numbers, when his BABIP normalized to .328.  His late-season run was impressive, and may have served to prop up his relative value, but the reality is he’ll have to improve upon his 29.9 percent season strikeout-rate—or learn how to harness his elite exit-velocity to greatly improve his nominal home run efficiency—if he is to become a valuable major-league contributor. Let’s dig into how pitchers attacked him to find areas he could possibly improve upon:

The highlighted swing-percentages fall within a relatively narrow band, but where it starts to get sticky is in the whiff-percentage column. Soler is clearly a bonafide major-league fastball hitter, whiffing at fewer than nine percent of fastballs and sinkers. However, the length of his swing greatly affects his ability to hit off-speed and breaking stuff, and major-league pitching is exploiting this weakness. After getting a picture of what pitchers threw him, let’s look at where they targeted him: 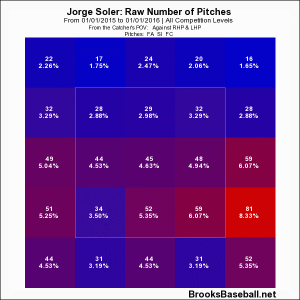 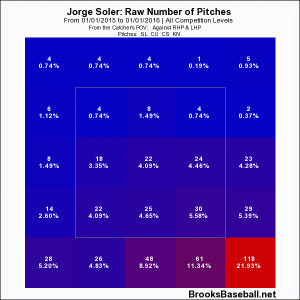 Soler vs breaking stuff in 2015 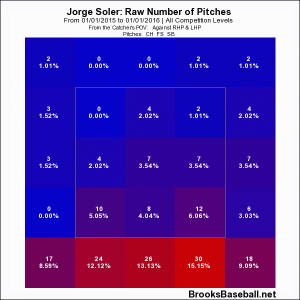 Not a lot of ambiguity here. The book is out, and it clearly reads to attack him down-and-away with off-speed and breaking pitches. Did it work? Unequivocally, it did. Locate any pitch anywhere in the zone, and Soler was an unstoppable force; proficiently slugging his way into our dreams (with an impressive spray chart, to boot!). However, if you managed to hit your target anywhere below the zone and induce a swing, chances are high you reached a successful result. Why were the results so startling? Let’s consult one last chart to clear up the picture: When located just below the zone (and by extension, generally off-speed), his contact rate plummeted to around an abysmal 30 percent. Let me be clear: Soler is still a very inexperienced player with an exciting offensive profile and tremendous upside, but he must improve upon his ability to ignore pitches out of the strike zone if he is to maximize the brilliance of his potential.

Despite not possessing elite speed or being too adventurous on the basepaths, Soler managed to rate positively in UBR (2.1), but was a slight liability according to BRR (-0.3). Because he does not attempt to steal many bases—just four in 2015—his value on the basepaths will always be closely tied to making smart decisions and avoiding costly outs. As his athleticism has likely already peaked, look for this to be a slowly declining facet—albeit to a minimal effect—of his overall game.

This is where the picture begins to darken. Long known to possess a cannon for an arm, Soler has been something of a disappointment in all other defensive facets. His athleticism in the box and on the basepaths does not appear to translate to the defensive side of the game, where the eye-test suggests below-average routes, hesitancy, and a slow first step. Advanced metrics strongly agree: BP’s FRAA rated him as a -7.2, which is bordering on “horrendous” when extrapolated over 150 games. Fangraphs’ UZR/150 paints a similar picture, with his 2015 performance coming in at an alarming -12.7. While his lack of range is the main culprit (-7.8 RngR), even his highly lauded arm rates out at slightly below average (-0.1 ARM).

Now that I’ve painted a picture of a player who looks like he belongs in the American League, it’s time to remind everyone that this was his first full season in the majors. Beyond that, his season was truncated as the result of two separate injuries. Soler is still very inexperienced, and with proper work and coaching, the possibility remains that he could markedly improve in the field. However, if you start to hear his name come up in legitimate offseason trade rumors, you can be sure these defensive deficiencies are one of the primary driving forces behind those whispers.

Looking Ahead: Soler remains a tantalizing subject; monstrous power, exceptional arm strength, hints of effective plate-discipline. But it is those same tools that may mask a painful truth thus far in his young career: He has yet to harness his abilities into being a productive major-league contributor. Serious defensive deficiencies and an exploitable offensive hole must be improved upon if he hopes to maintain his current status as a core piece of this dynamic young team.

The Cubs’ outfield picture will be scintillating theater this offseason, and Soler may be the linchpin in a series of high-profile moves. Does the front office believe Soler just needs a little seasoning to become a power-hitting, strike-zone controlling, on-base machine? Is he the guy who made encouraging second-half strides, and then exploded in the playoffs? Or, is he a flawed, free-swinging, defensive liability who belongs in the Junior Circuit in a few years? Theo Epstein made it clear that improving outfield defensive was a primary focus this offseason, and the decision needs to be made whether the necessary advancement is possible with Kyle Schwarber and Soler roaming around in the outfield together. My colleague, Rian Watt, laid out a compelling case for Schwarber being adequate defensively, with his high-profile defensive lapses serving to feed a narrative rather than propagate facts. I agree with this assertion—and if Epstein is serious about defensive upgrades—which leads us to one conclusion: the Cubs very well may leverage Soler’s still-incredible ceiling in a trade for pitching (perhaps someone like Julio Teheran) as soon as this offseason.

As much potential as he Soler oozes with, I think we have to sell high. Shelby Miller for him would be a great trade.

I tend to agree. I believe his potential may hold more value than what he will actually be.