“If broadcasters are right about the keys to pitching success—get ahead of hitters, change speeds, avoid walks—Hendricks is destined to be a booth favorite. The Dartmouth product doesn’t have great stuff but he commands it well, varying his fastball from the mid-80s to the low 90s and mixing in a cutter, slider, curve and changeup. It’s a combination that baffled hitters in the high minors last year, and earned Hendricks the organization’s Pitcher of the Year award. The same approach currently earns millions for Kyle Lohse, though it’s more likely Hendricks will settle into the back end of a big-league rotation or make his mark in middle relief.”

That’s Hendricks’s entry from the 2014 BP Annual, which was published before that campaign began. It turned out to be prescient. Hendricks started the year in Triple-A Iowa, throwing 102 2/3 solid but unspectacular innings for that club before getting the call to Wrigley on July 10th, less than a week after the blockbuster Jeff Samardzija-Jason Hammel-Addison Russell trade created two immediate openings in the Cubs’ rotation. Hendricks performed extremely well in 80 1/3 big-league innings that fall, striking out somewhat fewer batters than usual (a 14.6 K% against a 23.3 mark in Triple-A that year) but posting a shiny 2.46 ERA to go along with a perfectly respectable DRA of 3.06. All told, 2014 was a successful year for the young right-hander.

Given his relatively pedestrian stuff and skinny frame, though, the question about Hendricks going into 2015 was as simple to ask as it was difficult to fulfill: could he do it again? Now that 2015 is in the books, we’ve got a fairly simple answer to that question: pretty much, yes. Let’s make that answer a little bit more complicated. Over 180 innings in 2015—that’s nearly identical to 2014’s total of 183, except that this year’s innings were all thrown in the big leagues—Hendricks posted slightly weaker marks in essentially every useful pitching category, save for his strikeout rate (which shot back up to a 22.6%), but avoided an outright collapse in any particular category and thus ended the year with a perfectly adequate DRA (3.87) and a respectable WARP (2.5).

That’s good, but not great, which is sort of what we’ve expected from Hendricks all along. And it’s more than good enough for the back end of the Cubs’ rotation, which is exactly where Hendricks ended up in 2015 and will (probably) start 2016—more on that later. It wasn’t clear, before 2015, whether his stuff would play over the course of a full season, but it’s a heck of a lot clearer now. Hendricks may never post a 2.46 ERA again, but he probably won’t put up a 5.50, either. That has real value in today’s game.

Now, there’ll always be risks associated with Hendricks’s profile, and they’ll likely keep him from ever securing a spot at the top of the rotation. He has a tendency—especially when he throws his curveball in the wrong spot—to give up more than his share of home runs, and that trend accelerated in 2015: Hendricks allowed 0.85 home runs per nine innings last year, which is significantly worse than 2014’s mark of 0.45. And when he’s not locating his stuff well, he can get hit pretty hard: 13 times in 2015, he failed to go deeper than the fifth inning. That puts extra pressure on the relief corps, and in an ideal world, you’d like to see him learn to pitch a little farther into games; that won’t happen so long as he keeps giving up an .894 OPS to hitters the third time through the order. Hendricks is a diligent student of the game, so I’m sure he’ll work on adjusting his sequencing to mitigate this problem over the offseason, but it’s a huge drag on his value at present.

There’s basically three questions for Hendricks going into 2016. First, can he hold up over his third straight season of throwing more than 180 innings? Second, can he maintain his spot in what’s sure to be an extra-crowded Cubs’ rotation? And finally, can he take his profile to the next level by doing something interesting with his changeup, which showed great promise at the end of 2015?

Let’s start with the last question. Here’s two charts which, when taken together, are highly suggestive: 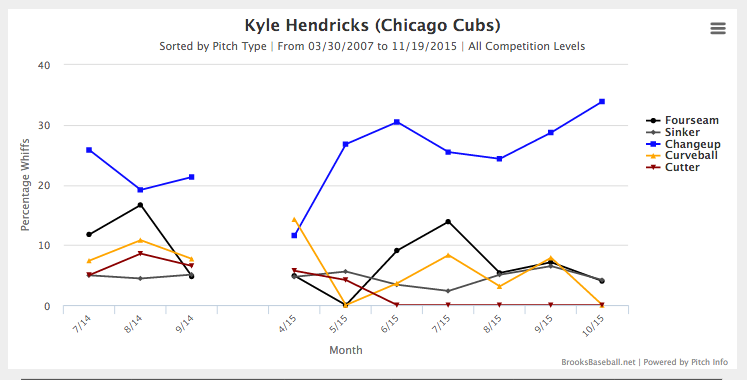 Late in 2015—think mid-September—something fun started happening to Hendricks’s changeup: hitters stopped hitting it (that’s what the first chart shows). And at the same time, another thing happened as well: Hendricks started throwing more changeups overall (mostly at the expense of his curveball, though his fourseam usage dropped as well). And then a third thing happened: Hendricks started generating swings and misses at a terrific rate. From the beginning of the season until September 5th, Hendricks got whiffs on about eight percent of his pitches. Over his last five starts—which coincided with his increased use of the changeup—Hendricks got whiffs on about 11 percent of his pitches. If that doesn’t sound like a huge increase, look at it this way: over his final five starts, Hendricks increased his ability to generate the swing and miss by 37.5 percent. That’s huge.

Well, I don’t know for sure. But here’s my guess: by burying his changeup at the bottom of the zone. Hendricks’s M.O. with the pitch has always been to throw it late in the count (after setting it up with a four-seam fastball, which has the same release point and horizontal movement) and try to get strike three swinging. Except that, early in the year, he tried to get two bites at the apple. Check this out: 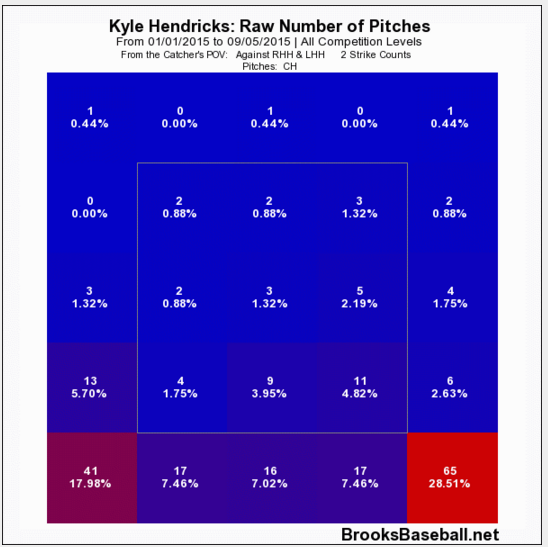 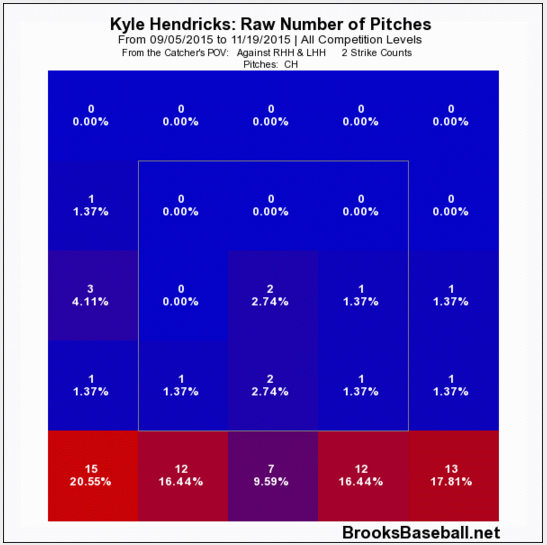 The first chart is from Hendricks’ starts up to September 5th, the second from his last five starts. On the surface, they look pretty similar, and exactly as expected: lots of pitches down and away from hitters (both charts isolate changeups thrown with two-strike counts). But check out the bottom two-thirds of the zone. In the beginning of the season, Hendricks threw 14.91 percent of his two-strike changeups in the strikezone. Presumably, he was hoping that, if the hitter didn’t swing, the pitch would sail by and he’d get a called strike three anyway. But for his last five starts, that strategy changed, and Hedricks started burying his changeup: only 9.59 percent of his changeups, over his last five starts, came in the bottom two-thirds of the zone. Why? Because, instead of going for called strikes, as he’d (presumably) hoped, those pitches were getting hit, and hit hard: 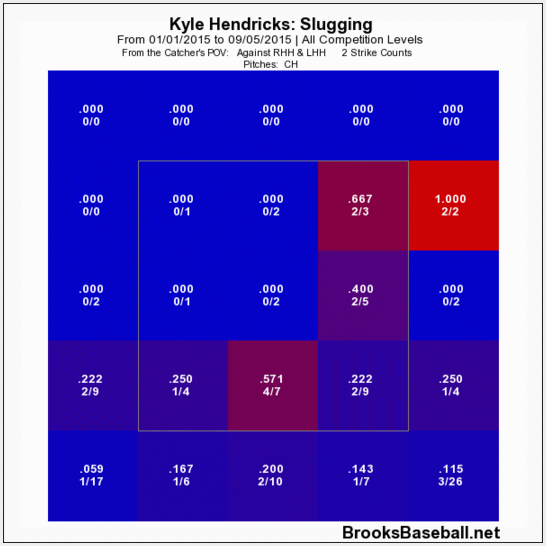 So in his last five starts, Hendricks ditched his efforts to get two bites at the apple—a swinging strike, in the best-case scenario, and a called strike if not—and instead focused on burying the changeup for a swinging strike. The results? Well, you saw them above. I’m not sure this strategy will work forever—eventually, hitters will just stop swinging against Hendricks with two strikes—but if Hendricks can keep hitters off-balance enough with a well-placed fastball or curve, it could pay real dividends for him in 2016, as it did at the tail end of 2015.

Even if that doesn’t happen, though, the Cubs will be perfectly happy if Hendricks simply matches his PECOTA projections for the rest of his years under team control (he’ll be a free agent in 2021).

The road will be tough, though. The Cubs are extremely likely to add a number of intriguing back-end options to the rotation for Spring Training 2016, and there remains an outside chance that one of the pricey free agent starters will join the North Siders as well. If that’s the case, Hendricks will find himself doing battle with his 2015 rotation-mate, Hammel, for the fifth spot in the Cubs’ rotation. He had a good 2015, yes, and he’s a cheap back-end starter with a high floor. But when you don’t have pure stuff on the order of a Jake Arrieta or a Jon Lester, you’re going to have to prove yourself every year. That’s doubly true when, like Hendricks, you’re built like an actuary. But here’s the bottom line: Hendricks has an opportunity to solidify his role in the Cubs’ future with a solid 2016 and, with some tinkering to his arsenal—perhaps even to his changeup sequencing—he might be able to do just that.

It seemed Hendricks’ velocity fell off a bit in the playoffs. Regular season he’d hit 91, occasionally 92 during games. In his two playoff appearances I was seeing a lot of 86-87 max.