Why He Fits: Taiwanese-born Wei-Yin Chen had been out of the offseason spotlight until this Saturday, when Bruce Levine tweeted that he was a “hot topic” for the Cubs. The timing of this report was interesting after Friday’s John Lackey signing, as it would suggest that Chicago is still active in the free-agent market for starting pitching depth. Some (myself included) think that it might make more sense for the Cubs to trade for starting pitching or at least wait out the expensive signing frenzy for starters, but Chen, 30, is certainly an interesting (and somewhat less known) target, so let’s see how he might fit in.

The case for Chen is a case for consistency. Chen—and I mean this in a nice way—excels at being average. Take a look at the statistics from his first four years in the league:

The numbers here are remarkably consistent, and show why—all else equal—a pitcher like Chen might be more attractive as a depth starter than, say, Jason Hammel. Chen has consistently posted a K/9 between 6.6 and 7.2, an opponent TAv between .259 and .265, a cFIP between 96 and 102 (the definition of a league average pitcher), and DRA between 4.15 and 4.29. He has also posted 30-plus starts in three of the four seasons he has been in the majors, which makes the consistency of his numbers all the more impressive.

There are other attractive parts of Chen’s game, too. His groundball rate is middling, but it has slowly trended up over the past two seasons, which is always an attractive asset for pitchers at Wrigley Field. He also hasn’t shown any signs of aging yet: the velocities across his five-pitch mix have remained very consistent year to year. His fastball (which he uses around 50-60 percent of the time) sits between 92 and 93 mph, and he mixes in a sinker, curveball, slider, and splitter about 5-15 percent of the time, respectively. The consistency of his mix is probably what makes his results so consistent: he really has been the same pitcher for the last four years. 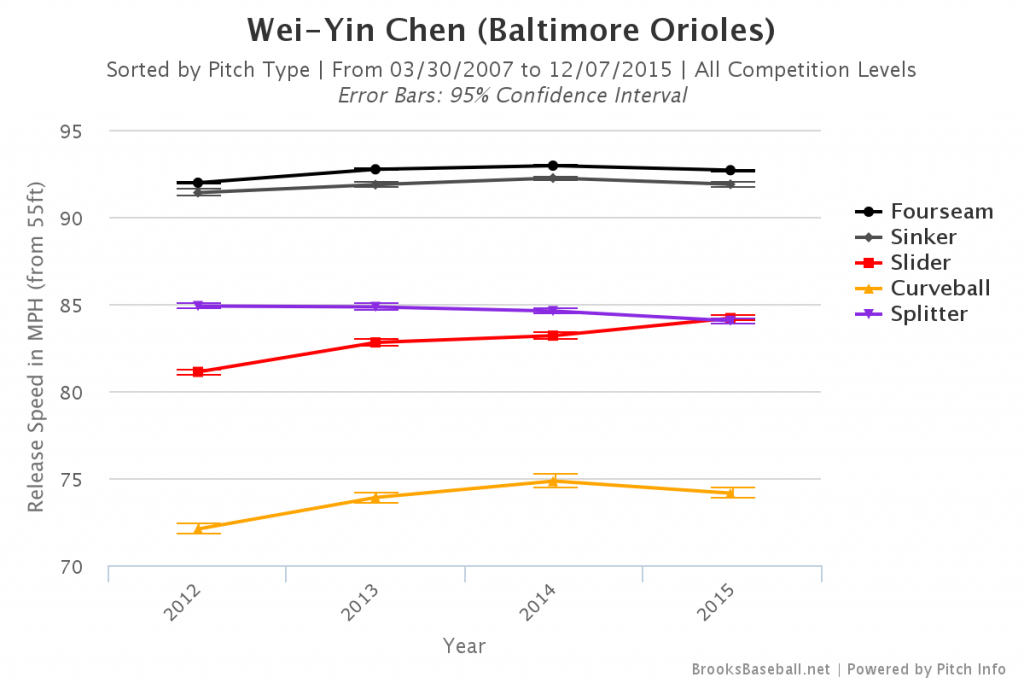 Chen has also accomplished all of this in the American League East, where he has had to face many of the league’s strongest lineups without the benefit of facing pitchers. In these respects, Chen has real value. He could slot into the back end of any team’s rotation and immediately make it better. This is why he rejected the Orioles’ qualifying offer this November. He does deserve a multi-year deal from somebody, and he will get it.

Why it Won’t Work: The major red flag with Chen is his home run rate, which at 1.32 HR/9 was solidly in the bottom fourth of the league. This is dangerous anywhere, but especially at Wrigley Field’s small and windy confines. Chen also simply doesn’t have a put-away pitch; the closest thing he has is his slider, which is still hit more than 70 percent of the time. None of this is to say that Chen wouldn’t be successful with the Cubs, but the real question is how much the Cubs would have to pay for whatever success he has.

Chen is a solid free agent pitcher, and that is actually why he makes little sense for the Cubs at this time. His results, while good, are fairly easily and inexpensively replaced. The Cubs signed Trevor Cahill to a one-year, 4.25 million dollar deal on Monday, and this is the sort of depth signing that, in conjunction with others, can provide similar production to Chen without the risk of a long-term deal and without the loss of a draft pick. Chen’s 2015 ERA of 3.34 was a career-best, which might mean that the deal he ends up getting is for more money (and more years) than his peripherals suggest would be prudent. Tim Dierkes of MLB Trade Rumors projected Chen to get a five-year deal for $80 million. This is likely a high estimate, but at this price–or anywhere close to it–the Cubs would be better served by looking elsewhere for starting pitching. Levine’s report makes it sounds like the Cubs are doing what they always do: their due diligence. With Chen, I’d be surprised if they did anything more than that.

Tags: Offseason, Potential Offseason Target, Wei-Yin Chen |
Nate Greabe
Follow @ngreabe
Nate is a baseball lover from New Hampshire, where he grew up a Red Sox fan by geography and a Cubs fan by his Chicagoan father. He just finished his degree and now lives in Austin, which is weird.
read more from Nate Greabe

Hmmm. Wei-Yin Chen is a Taiwanese, not a Korean. Just FYI.