Year In Review: Nobody seems to take it too seriously, but the Cubs actually had an excellent bullpen in 2015—their 3.38 ‘pen ERA was fourth in the National League, behind the Cardinals, Pirates, and Giants—and Strop was a major contributor to that result.

In fact, for the second consecutive year, Pedro Strop was one of the best relievers in baseball. To wit, here’s the complete list of all relievers with as many innings pitched as Strop since 2014, a lower ERA, a lower walk rate, and a higher strikeout rate:

Now, there’s a bit of a sleight of hand here: Andrew Miller and Aroldis Chapman, for example, both have better ERAs, better strikeout rates, and better walk rates than Strop, and only nine fewer innings pitched over the last two years. There’s a degree to which I’m manipulating the data here, but I’m ok with it, because the point I’m trying to get across is this: if you’re not thinking of Strop as an elite reliever, you’re not thinking of the right guy.

Given that Strop is that good, let’s talk a little bit about how he’s made it happen. To do that, it’s worth rehashing some basics. The first thing that’s useful to know is that, in order to succeed in the big leagues as a starter, you need at least three average-or-better pitches. Four is better, and you’ll want at least one of them to flash “plus” (that’s above average) if you want to last long at all.

You need that many pitches as a starter because big-league hitters are smart, too, and if you just throw one or two pitches at them—even one or two very good pitches—they’ll work it out by the second or third time you face them in a game, and you’ll head to the Baseball Players’ Retirement Agency* sooner than you’d have liked.

Things are different for relievers. As a reliever, you’re only facing batters once a game—maybe, if things go terribly wrong, twice—and so you can get away with just two good pitches. (If you’re Mariano Rivera, you can get away with one all-time great pitch, but that’s a different story.) And that’s how Strop’s been successful—with two basic pitches: a fastball and a slider.

You’ll note from the chart that his fastball actually comes in two varieties: a four-seam fastball, which is relatively straight, and a sinking fastball, thrown at the same speed, and which he throws somewhat more regularly than the four-seam variety. Here’s another helpful pitching tip: if you can throw two pitches that look the same out of the hand, travel at the same speed, but move in a different way, that’s a very good thing indeed. Strop can do that.

And it works for him: his strong fastball allows him to set up a devastating slider, which is rivaled only really by those of Messrs. Betances and Miller, who are also elite relievers. As the years since 2013—his breakout year—have progressed, Strop has gone to the slider more and more, mostly at the expense of his sinking fastball, but also to a lesser extent drawing bullets away from his rarely-used changeup and split-finger fastball (blue and purple, respectively, above).

That makes sense, honestly, because it’s working for him, but it does lead me to worry a little bit about the state of his elbow moving forward. Research hasn’t conclusively linked slider usage to an increased probability of elbow injury, but it has linked previous elbow injuries to future injuries, and Strop had some bone removed from his elbow in 2008. For now, it’s just something I’m keeping in the back of my head.

Looking Ahead: Relievers are notoriously fickle year-to-year, and so I hesitate to project a three-peat for Strop in 2016. I will say this: Strop has shown he can be a dominant reliever, and that’s a lot better of a position to be in than not having proven that. And nothing in his numbers (save, perhaps, the risk of injury discussed above) suggests he’s in line for a decline in performance in 2016, his age-31 season. But you never know. So I’ll leave my projection at this: there’s no reason for Strop not to be good in 2016, except for the reason will make him bad, if he is indeed bad.

Aren’t you glad you come here for the analysis? To make it up to you, let me leave you with two observations about Strop’s 2015 that might have implications for his 2016. Here’s the first one: Strop spent a lot more time down in the zone in 2015 than he ever did before. To wit:

Notice that huge dropoff in 2015? In previous seasons, Strop spent most of his time throwing down and away from batters, and would occasionally toss a pitch middle-in to move them back off the plate. Last year, though, he stopped doing that. Why? Because he found batters pretty much never did damage on pitches down and away, and (presumably) enjoyed that outcome: 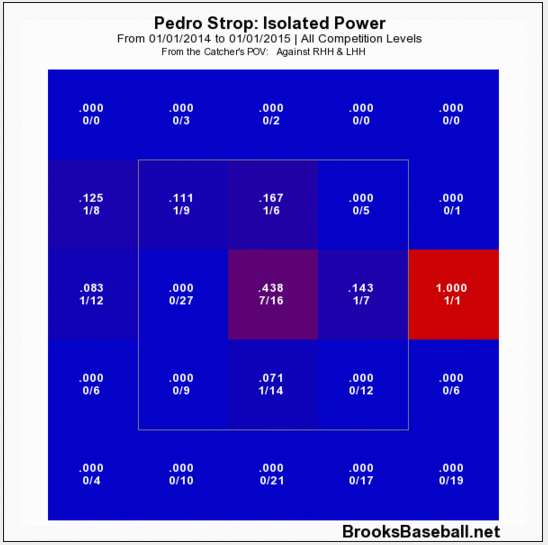 (The key data point you’re looking at in this chart is the combined 0-for-54 ISO in the bottom-right four squares.)

But here’s the thing: big-league hitters are smart. If they know that you’re pretty much only going to throw your pitch down and away, they’ll creep closer to the plate more and more in an effort to get the solid part of the bat on those pitches. And—unless I’m very much mistaken—it’ll probably work out for them. So I would imagine that Strop is going to have to adjust back in 2016, and add some sort of new location to his repertoire. It doesn’t necessarily have to be the middle-in pitch that he used prior to 2015, but it should be something that changes the batter’s speed and eye-level in a way that appropriately sets up the slider.

So that’s one thing.

Here’s the other: Pedro Strop’s horizontal release point is on the move. Actually, it’s been on the move for a while. 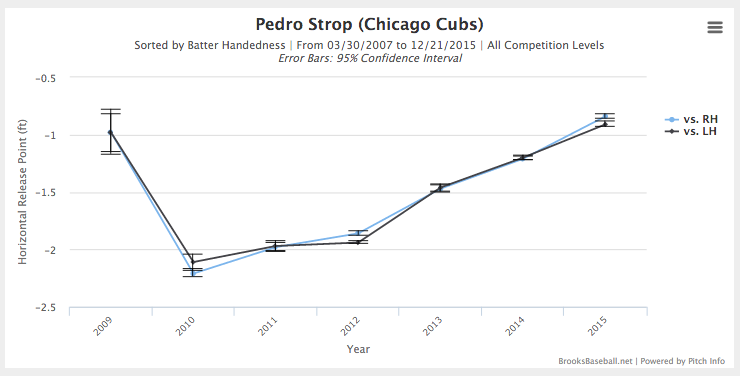 To be honest, I’m wasn’t too sure what to make of this when I started looking at it. The way to interpret the data above is to say that Strop has moved six inches closer to the plate over the last two seasons, and over a foot since 2011, but I wasn’t initially sure that I saw it showing up in games. More to the point, I wasn’t sure what it meant, even if I could find it in games.

Let’s start by trying to find it at all. Here, for example, is Strop pitching against the Cardinals at Wrigley in July of 2013, shortly after he was acquired by the Cubs: 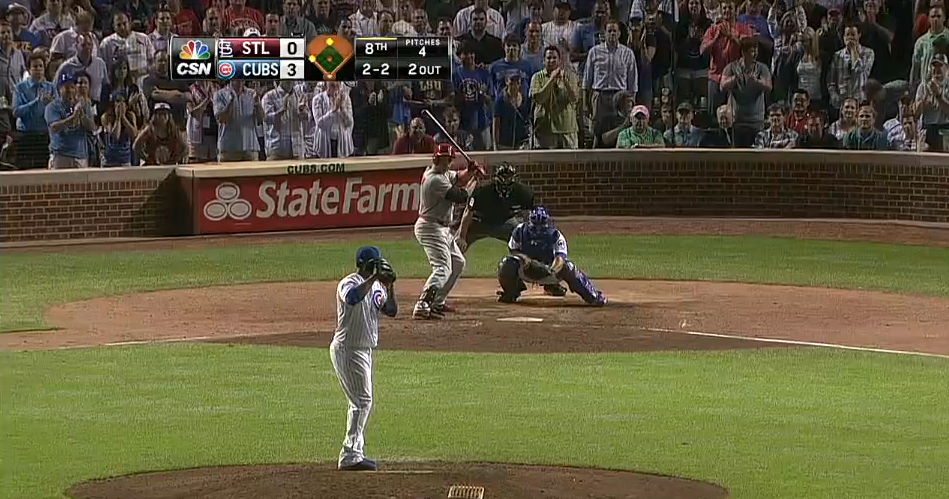 And here he is in July of 2015, again at Wrigley (thus keeping the camera angle constant): 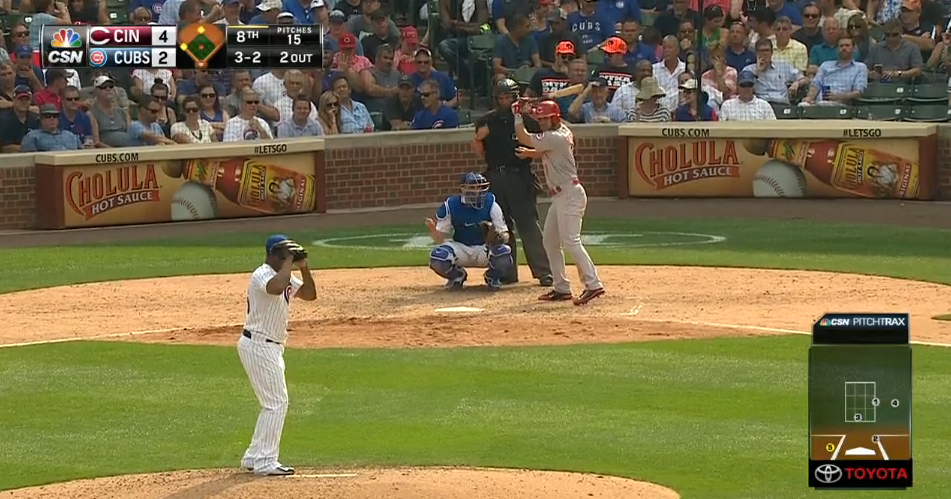 At first glance at the two images, I wasn’t convinced that I saw six inches of movement towards the center of the mound. But then, maybe I was looking at the wrong thing—maybe I was looking at where Strop was setting up rather than at his release point. So I took a gander at Strop delivering those same two pitches. Here, the delivery against the Cardinals in 2013: 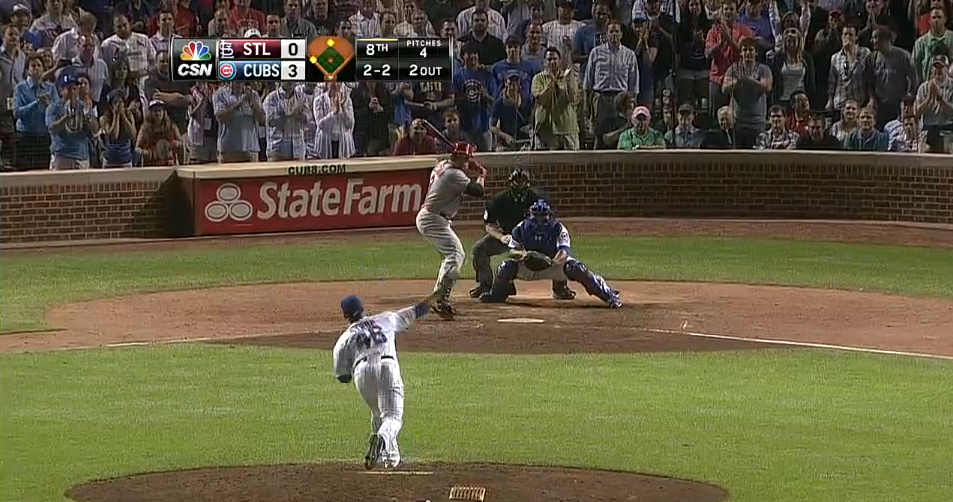 The frame rate isn’t great, but you can actually see the ball and a bit of his arm just to the right (when viewing) of the hitter’s knee. Now, here’s his delivery against the Reds in 2015: 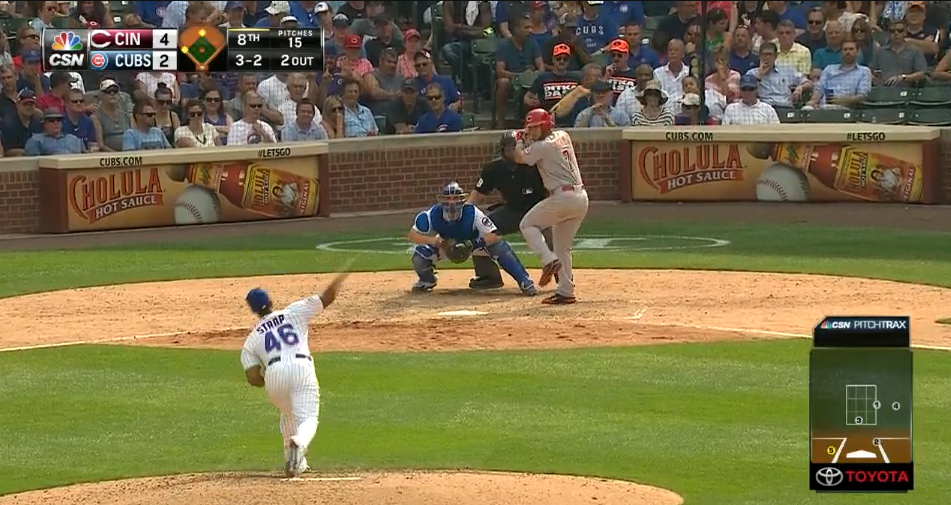 This time, I sort of saw it. Strop’s delivery in 2015 is quite a bit closer to the center of the mound in 2015 than it was in 2013, which means his body is torqued a bit more to the left (just like his hat!) in 2015. That’s interesting, sure, but only in a qualified sort of way: I’m not an expert in mechanics, and I certainly don’t know enough to draw firm conclusions about results from what I see in game.

So it was time to reach out to someone who is an expert in mechanics: BP’s own Doug Thorburn. Here’s what he had to say, when I showed him the pictures and text above:

Based on just the pictures you provided, I would agree that he’s starting in the same place (far left of the rubber) but finishing with a different position in the horizontal direction with respect to his release point. There are a couple of things to notice here: (a) the spine-tilt, as you alluded to—he has more tilt in 2015, resulting in an release point that is closer to the centerline than it was in 2015 (as you noted), and (b) his foot positioning. His front foot is left of the centerline in the 2015 pic, but closer to the centerline in ’13.

Both of these items suggest that he is manipulating the release point through a combination of directing his stride a bit more to the left and exaggerating the spine-tilt, resulting in a release that’s more to the left in ’15. It’s not a coincidence that the release has gotten higher while it gets closer to the middle of the rubber, as the extra tilt will result in a higher release as well as one that is less extreme in arm-side positioning. The horizontal component is more blatant because he is utilizing multiple techniques to get there (the spine-tilt and the stride).

It appears to be an aspect on all of his pitches (fastballs and sliders, anyway). Statistically, his Ks, BBs and HRs have been very close if comparing 2013 performance to ’15; it’s just the hit rate (and resulting ERA) that changed. So I’m not so sure that the mechanical change is doing much for him. What he’s gained in over-the-top has cost him in depth at release point, and the fact that it’s easier to throw strikes (in a vacuum) when releasing more over-the-top from the centerline than from a position that is off-center is likely confounding the results, especially given that his walk percentage was actually higher in ’15 than in ’13. So he might like the action better that he’s getting on the pitch, but he doesn’t necessarily have better command of it, and there are costs associated with the mechanical manipulations that he has made.

All of which I found incredibly helpful, and hope you did too. Mechanics—at least to my mind—are fun to learn about, and Doug is one of the best out there at working through them. So thanks, Doug.

Now, where does that leave us? I’d say here: impressed with what Strop has done during his time in Chicago—he’s got a 2.63 ERA over 164 relief innings on the North Side!—optimistic but not unambiguously confident about his future (remember, he’s a reliever with a history of elbow trouble), and more aware than we were before of some changes in his approach and delivery in 2015 that might have implications moving forward. And that, on this Christmas week, should be good enough for all of us. Happy holidays!

*This is not a real agency.

Ok, I get it, he’s got talent – however I cringed all last season ANY time he came in with runners on. He seemingly did not perform well in those pressure situations with anything resembling regularity. So irregular his cap became an ongoing issue of fodder. Beyond my two pesos of wise@$$ input thanks for taking the time Rian, it was another great read as usual sir.