2015 in Review: Acquired last winter from the Braves as middle-infield depth with a shot to compete for the starting second base job, Tommy La Stella quickly found himself ensconced in the team’s 60-day disabled list due to a strained oblique. Jonathan Herrera essentially replaced him on the roster, and La Stella didn’t return to the big-league club until the end of August, in the midst of the Cubs’ impressive stretch run.

In his short time with the Cubs, La Stella proved himself to be pretty much exactly who we expected him to be: an average contact hitter from the left side, and an average defender at second. The first quality earned him a start in the Wild Card game versus Pittsburgh, as Joe Maddon attempted to throw contact bats at Gerrit Cole in what figured to be a pitchers’ duel. Even so, La Stella found himself behind Coghlan and Baez on the depth chart.

La Stella’s batting line is, again, very average, but the batted-ball stats are what makes La Stella somewhat unique. The nine percent whiffs per swing stood out in a Cubs lineup featuring many strikeout-prone hitters, and even though his percentage of whiffs per swing on breaking balls went up this season (from 20 percent in 2014 to 29 percent in 2015), his percentages against fastballs and offspeed stuff went slightly down. One encouraging thing regarding his approach lies in the zone profile of his whiffs per swing from 2014 and 2015. Check out each of the last two years: 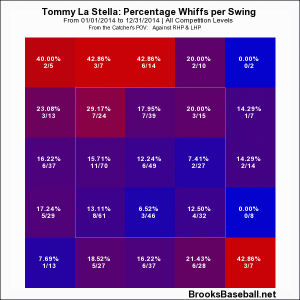 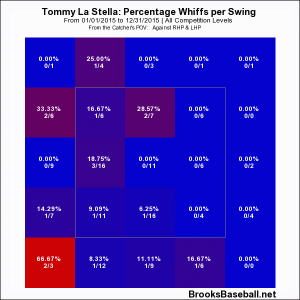 There’s some improvement there, again with the caveat of this being an injury-plagued season, but he remains somewhat susceptible to the higher strike. La Stella is more of a singles, groundball hitter than pretty much all other Cubs, which is not exactly a highly desirable skill. While he did hit fewer balls on the ground in 2015 than in the previous year as a percentage of balls in play, it remains to be seen if this is a trend driven by an approach change or a simple blip produced by an injury-shortened season.

Year Ahead: There’s not much about La Stella that remains to be figured out; his minor-league profile has translated to MLB, and he’s not a candidate for much growth.

La Stella is very much the 25th man on a stacked Cubs roster. Before the Cubs traded Starlin Castro, and before they released Brendan Ryan, I was skeptical that La Stella would even make the Cubs’ 2016 Opening Day roster. With the glove-first Ryan gone, however, La Stella is poised to be the last man on an impressive bench featuring Chris Coghlan, Javier Baez, and David Ross, plus either one more minor-league graduate or a defensive outfielder to-be-acquired.

With Ben Zobrist taking over second base duties, La Stella’s skills have been rendered somewhat redundant. Zobrist’s (and Jason Heyward’s) contact skills remedy a key weakness and make La Stella’s ability to put the ball in play less important to the Cubs than they were at the end of last season. La Stella’s middle-of-the-road defense, while on par with Zobrist’s, pales in comparison to Baez’s stellar glove work, and Baez’s versatility trumps La Stella’s one and a half positions.

If the Cubs believe in Christian Villanueva as a backup infield option, or if Arismendy Alcantara somehow finds redemption, then La Stella’s time with the 2016 Cubs will be short. The redundancies created by Zobrist, Baez, Coghlan, and even Heyward make La Stella a wholly expendable backup, should the Cubs acquire a position player more suited to their particular needs (especially if he can play first base or center field).

I would caution against snatching up those Tommy La Stella shirseys. Get one of those nifty clearance Starlin Castros instead.