Last year, at another site, I noted that the Cubs were, by one measure, extremely weird. In that article, I looked at eight team measures—strikeout rate, walk rate, home run rate (for pitchers and for batters), baserunning ability, and defensive ability—which are roughly united in that they all can be defining characteristics of a given team. I calculated league average in each category, and for each team, calculated their distance from league average in standard deviations, and added those up across all eight categories. I just looked at extremity, so, for example, the totals for both the Mariners and the Royals got big bumps from very bad and very good defense, respectively.

The Cubs took the top spot by a large margin, after being among the most extreme teams in every category. Their pitching staff struck out a ton of batters, walked not many, and gave up a low rate of home runs. Their defense was also above average, and their baserunning was the second-best in the league. And their hitting was extremely boom-or-bust, a bonanza of the three true outcomes. To me, this sounds like a recipe for fun, especially since the Cubs were actually good! Their total score was the second-highest of the last ten years; three of the other four teams on the top half of that list were just abysmal (2014 Rockies, 2010 Diamondbacks, 2013 Astros).

If you agree, and think abnormal teams sound enjoyable, I have good news for you. Baseball Prospectus released the PECOTA projections for 2016 recently, and they again think the Cubs are going to be strange. On the offensive side, they’re projected for the third-highest strikeout rate, at 22.6 percent, and the highest walk rate, at 9.7 percent. This might be unsurprising, given that they’re also projected for the highest isolated slugging in the league as well. With a lineup headlined by Kyle Schwarber, Jason Heyward, Kris Bryant, and Anthony Rizzo, the 2016 Cubs offense promises to be pyrotechnic.

BP’s metric for baserunning (BRR) was not nearly as impressed with the Cubs last year as FanGraphs’ was (which I used for the first piece), so it’s not a huge surprise PECOTA doesn’t think the Cubs are going to come anywhere near the top teams in this category.

A brief aside: last year, the top baserunner on the Cubs by BRR was Kyle Schwarber, of course, due very little to his three steals in six attempts and almost entirely to his success at taking extra bases on fly balls and hits. Schwarber had 2.9 “Hit Advancement Runs” in 27 opportunities, blowing away the rest of the roster. The next closest player on the Cubs, the recently departed Chris Coghlan, had more than a run less in 14 more opportunities. Among players with at least 20 opportunities, Schwarber’s rate of HAR per opportunity was the highest, and about 40 percent better than second place. Schwarber was legitimately great at this! Even in a category where the Cubs project to be basically average, it’ll happen in a weird way.

The Cubs also project to be just slightly below average defensively, but again with some compelling storylines and unresolved questions. The two big ones are how much and how well Kyle Schwarber will catch, and where Jason Heyward will play. I made some educated guesses on Schwarber’s future recently, and concluded there’s no reason to think he can’t hold his own behind the plate. Zack Moser did a similar thing for Heyward on Thursday, but that was before Dexter Fowler was re-signed. Now, the Great Center Field Experiment is likely over before it even begins, and the Cubs outfield has moved from Heyward CF/Soler and Coghlan RF to Fowler CF/Heyward RF, a real defensive upgrade. All that means that this average category probably isn’t going to be average much longer.

Finally, there’s the pitching. While PECOTA remembers Jake Arrieta’s 2013 and 2014 as well as his 2015, and therefore thinks he’ll be merely excellent rather than Cy Young-caliber in 2016, the Cubs still forecast to have a great pitching staff, and get there by striking out the seventh-most batters per nine, walking the seventh-fewest, and giving up the seventh-fewest home runs. Not only are those values fairly extreme, they’re all extreme in the direction Cubs fans would choose.

That’s what’s notable about the Cubs’ weirdness, as documented in 2015 and as projected for 2016. When ignoring positive or negative distance from the mean for 2016, they come in fourth (8.9 standard deviations), behind Philadelphia, Baltimore, and Kansas City. Notably, those are three teams that PECOTA is not very optimistic about, and in general, this metric doesn’t seem correlate that well with success. 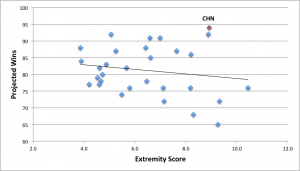 If, instead of adding up the distance from average for each team, you add if they’re better than average and subtract if worse, the Cubs blow everyone else away by miles, beating second place by 3 standard deviations, or more than the distance between second and eighth. For teams like the Royals, or if you aren’t feeling as hot take-y, the Orioles, having a distinctive style might end up as a welcome palliative to an otherwise disappointing season. The Cubs look like they’ll be weird in 2016, but more importantly, they’ll be weird and good. That sounds like a recipe for a real fun season to me.