Well. The Cubs have had quite a busy few days, when it comes to the outfield, and we now know that Kyle Schwarber, Jason Heyward, Jorge Soler, and Dexter Fowler are going to spend the bulk of the time roaming the outfield grass at Wrigley Field. But we’re also left with a lot of questions about how Joe Maddon is going to work four starting-quality players into the lineup on a regular basis.

The more I think about this, the more it seems like the discussion has to center on Kyle Schwarber and Jorge Soler. Fowler and Heyward are very established veterans, with long track records playing on an everyday basis. While the four-man outfield might cause those two to get more days off than they might normally enjoy, it’s safe to say that they will be out there the bulk of the time. So how can the Cubs’ two young outfield stars go about proving their worth and earning playing time in the outfield, in the eyes of Maddon and the Cubs front office? I think the key runs through contact. Let’s take a look at some interesting numbers I dug up on contact and swing rates, via Brooks Baseball:

First, some notes about Soler. According to Fangraphs, the average in-the-zone contact percentage for a hitter in Major League Baseball is around 87 percent, or pretty close to what Soler actually put up in 2015. And swinging at 34.9 percent of pitches that are thrown outside the strike zone, as Soler did last year, comes in slightly above the average rate of 30 percent, which is perfectly fine by itself. But that’s where we find the real problem for the tall Cuban outfielder. While that same piece at Fangraphs notes that the average contact rate on pitches outside the zone is around 66 percent, Soler makes contact with just 45 percent of pitches he swings at outside the strike zone.

Simply put, Soler’s selection at the plate was a big-time problem for him. Check out the exit velocity off the bat, broken down by where the ball was in relation to the strike zone (via Baseball Savant): 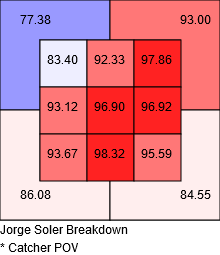 Those numbers at the bottom are key for him. In those zones, Soler swings at 37 percent of the pitches thrown to him and makes contact just 50 percent of the time. If you’re willing to extrapolate from Soler’s ability to hit .200 on balls in play with an exit velocity of 85-89 mph in 2015, you can fairly easily project 40+ more balls in play at that velocity for Soler in 2016 if you allow him to increase his contact rate a mere ten points, to 60 percent. Those 40+ balls in play translate, at a .200 rate, to about eight hits, which would have raised Soler’s batting average from .262 to .284 and his OBP from .324 to .344. Of course, that scenario requires a lot of assumptions, but you get the point. Contact is key, and can make a big difference.

In the playoffs, albeit a small sample, Soler showed off the batting eye that the Cubs fell in love with back in 2012 and that could one day make him a superstar at the plate. He only swung at 24 percent of pitches seen outside the strike zone, compared to the 34.9 percent rate during the regular season. His contact rate in the zone dropped to just 75 percent—again, small sample size—but the ability to lay off the pitches away from the zone made all the difference in the world. In the postseason, he hit 9-for-19 with six walks and just five strikeouts, hitting three doubles and three home runs.

If you’ve digested all of that, let’s take a short look at what’s going on with Schwarber. His problems were different than Soler’s in that he struggled to make consistent contact inside the strike zone, connecting with just 73.7 percent of the total pitches seen in the zone. But the zone contact goes to 76 percent against right-handed pitchers, and drops to a putrid 65 percent against left-handed pitchers. As if that weren’t bad enough, his overall contact rate against lefties was even lower at 60 percent.

It’s no secret that, in a limited amount of time in Chicago, Schwarber struggled with left-handed pitching. He hit just 8-for-56 with two homers during the regular season with 27 strikeouts, or about a 44 percent strikeout rate. While part of Schwarber’s development will mean continuing to get him the occasional start behind the plate, another part of it will be to gradually bring him along against left-handed pitching. I’m confident that a hitter with such natural abilities will be able to master lefties eventually, but in the meantime it might be good for him to take the starts against tougher left-handers off—while remaining ready to pinch-hit late in the game. What a nasty weapon for Maddon to have at his disposal.

So where does that lead things? Well: If Soler can simply lay off some of the pitches low of the zone there’s a good chance he’ll provide tremendous value with the bat. With in-the-zone contact rates and a percentage of pitches in the zone similar to Fowler, there’s no reason Soler couldn’t be more like Fowler has an overall hitter. And if Schwarber can adapt his approach to left-handed pitchers, possibly in the same way the Anthony Rizzo did back in 2014, he’ll prove himself more than just a very good platoon bat. As it stands, it’s unclear how Maddon would be best served to split the time between Soler and Schwarber. To say that Schwarber should take the starts against right-handed pitchers and Soler against the lefties is an oversimplification, and not one that’s well thought-out. But heading into the early games of spring training this week, it’s clear what each player needs to do to maximize his ability, and grab the reigns on a regular spot in the Cubs crowded outfield.

I think Ryan pretty well nailed it. Kyle should 4get about catching just hone the skill in L field. And of course much batting practice vs L handed pitchers.