It now appears that Kyle Schwarber will be Jason Hammel’s personal catcher for some portion of the 2016 season, and possibly all of it. That’s the plan, anyway, according to (variously) the Chicago Tribune and Comcast SportsNet. Why? Let’s think about this first from Schwarber’s perspective. For one thing, the Cubs want to give Miguel Montero’s 32-year-old knees a bit of a break next year, and throwing Schwarber into a catching rotation that already features David Ross (catching Jon Lester, for the most part, though there’s a case to be made that he should be used more selectively than that) means the veteran Venezuelan will only be behind the dish for games started by Jake Arrieta, John Lackey, and Kyle Hendricks.

For another, though, the Cubs want Schwarber to see some time behind the plate in 2016, even if they no longer see him as the “catcher of the future” (Willson Contreras now holds that title, on the back of a dominant season at Double-A last year and a strong spring). Schwarber’s monster bat is quite a bit more valuable behind the dish than in left field, and his ability to switch positions late in games will make a big difference for Joe Maddon as the Cubs work to fit four outfielders into a regular rotation at Wrigley next year. In short, the Cubs want to keep Schwarber fresh behind the plate in 2016, but not make him their regular starter at the position.

It’s hard to take issue with that as a goal. Similarly, it makes sense that the Cubs would choose one particular starter for Schwarber to catch next year: it allows the young Ohioan ample opportunity to develop a rapport with the pitcher of choice, and it limits the amount of new information he’ll have to take in defensively during a sophomore season in which, let’s face it, the league will have adjusted to one degree or another to his offensive profile in the batter’s box. Catching just one pitcher achieves the main goal—getting Schwarber some playing time at catcher—and cuts out a lot of other distractions. All that makes sense.

But why Hammel? This is where it’s helpful to switch things around and think of the change from the pitcher’s perspective. Why, in particular, would this pitcher make sense for Schwarber to catch, with the given that Schwarber is going to have to catch somebody? A few different lines of argument seem to have emerged from Cubs camp in Mesa. First, Schwarber seems to have lowered his catching crouch in a way that the long-levered Hammel, in particular, appreciates. From that CSN Chicago article:

“You’re seeing him stick his leg out and giving a lower target than he was last year, [said Hammel]. It only helps the guys like me with tall leverage where I need that little extra sight line down to drive the ball down.”

Hard to argue with that. Here’s Hammel pitching to Schwarber for the first time last year, against the Reds on July 21st: 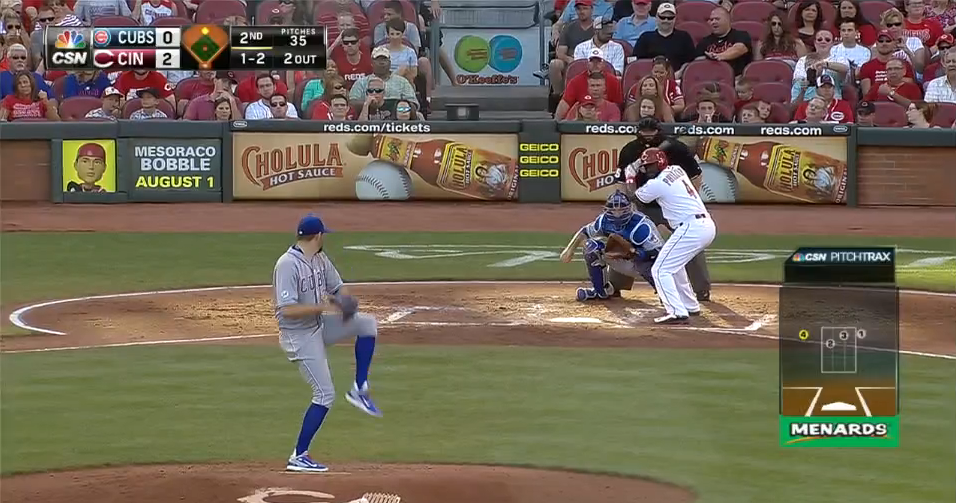 And here he is throwing to that same Reds team on October 1st, again to Schwarber, in his final start of the season. 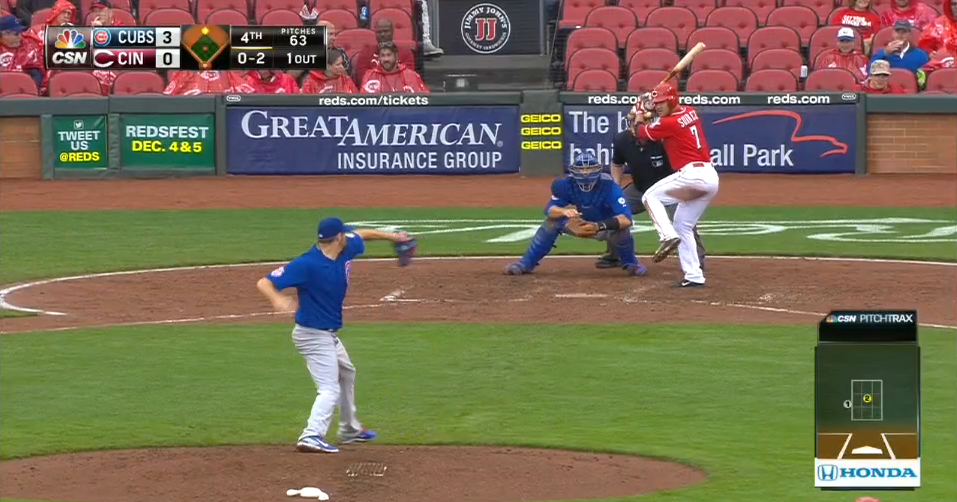 Despite the odd angles, it’s clear that there’s a definite change in Schwarber’s setup there, and that indeed might be something that’s driving Hammel’s comfort with him for 2016. Indeed, that last start pictured above, in October of 2015 against the Reds, was a start Hammel liked so much (according to the Tribune story) that it’s contributed to some of the comfort-level he and the Cubs are feeling with Schwarber at catcher this year. Here’s what happened that day (the last few columns are pitches, strikes, fouls, swinging strikes, looking strikes, ground balls, fly balls, and line drives, respectively):

Sure, the innings count could be a little bit higher, but the top-line results are good, and in general it’s not worth looking too much into the results at a really granular level (or indeed the zone charts, for any of Hammel’s starts with Schwarber). That sort of stuff is driven, over such a small sample size, by the opponents being faced and how Hammel was feeling about his repertoire on the days in question. So don’t look to the numbers from last year to understand how the Schwarber-Hammel combo will pitch next year: the Cubs don’t expect Hammel’s game plan to change start to start, regardless of who catches him next year. Look, instead, to the comfort level. Though Schwarber may have some opportunity to bring his own insights to bear on the scouting report from time to time, this move is predicated more on the growing familiarity between the two men than on anything else. The Cubs hope that that easy relationship will bring results.

And, you know what? It might. Hammel is well known as a guy who likes a consistent presence behind the plate, and the Cubs have given that to him this year, much as they did with John Baker (another number 14!) a few years ago. Combined with his new-look physique—a stronger lower half, in particular—that consistency behind the plate might be enough to get Hammel through a full 200-inning season at the level of performance he’s put up in the first half over the last few years. He knows he has the repertoire; now, all he needs is the ability to repeat it over a 162-game season. Another added bonus of this plan? It’ll give Schwarber more opportunities to hang out with David Ross in the catcher’s meetings, and that’s good for everybody.

Tags: Catching, Jason Hammel, Kyle Schwarber |
Rian Watt
Follow @rianwatt
Rian is the editor-in-chief of BP Wrigleyville, an author at Baseball Prospectus, and a contributor at VICE Sports and FiveThirtyEight. He's based in Boston, and misses Chicago every day.
read more from Rian Watt

4 comments on “Hammel, Cubs Banking On Familiarity With Schwarber To Drive Results”

More at-bats for Soler and locks Schwarber into matchups against lefties (theoretically). A lot to like about this.

Check out today’s lineup fir a glimpse into the future and drool; not only are all big bats on deck (except for Montero and Baez coming off the bench), but Hammel is slso–finally!– batting 9th.

Say hello to the future, sans Ross, and drool away.

While pairing Schwarber with Hammel makes more sense than the earlier rumors that he could work primarily with Hendricks–an idea I did not like for several reasons–it still isn’t the ideal battery to my mind. If there’s a pitcher on this staff who could be the peanut butter to Schwarber’s jelly, that pitcher has to be John Lackey.

For starters, compare his repertoire and pitch selection to Hammel’s. Lackey has always been a fastball-heavy pitcher, and he has only increased his fastball use in recent seasons. In 2015, he threw a fastball (fourseam or sinker) 68% of the time. Only five qualifying starters offered a steadier diet of heat. He also simplified his usage of breaking balls during his time in St Louis. Historically, he has thrown roughly 40% breaking balls with a fairly even distribution of sliders and curves, mixing in an occasional changeup. In 2015, he saw that pitch timeshare shift dramatically in favor of the slider, using his curve less than half as often as before and virtually abandoning his changeup. In contrast, Hammel is a breaking ball aficionado. He throws the hard stuff for just slightly more than half of his pitches, relying on a slider 36% of the time. That’s good for the fourth highest slider usage amongst qualified starters. Last season, Lackey also threw a higher percentage of first pitch strikes than any starter not named Max Scherzer. He gets ahead early and proceeds to pound the zone with fastballs. If I could build Schwarber’s battery mate from scratch, that description would probably be my starting point.

Perhaps less important than his repertoire, but still worth mentioning, is the reputation that repertoire has garnered. I’m sure we would all prefer if umpires were perfectly objective, but the reality is that baseball is a game obsessed with paying dues. Young pitchers will be squeezed while established veterans will more often get the benefit of the doubt, having “earned it.” This is one of the reasons I wasn’t enamored with the idea of Hendricks pitching to Schwarber. A fourteen year veteran like Lackey isn’t getting squeezed by home plate umpires, especially when his reputation as “a strike thrower” is so well-established. A generous strike zone can only help Schwarber as he refines his receiving skills.

All that said, to me, the choice is made truly easy for one reason: Lackey is Winston Churchill compared to Hammel. He threw 48 more innings last season in only two more starts. Hammel went 7+ innings just eight times in 2015. Lackey, meanwhile, accomplished the feat in 21 of his 33 starts, and failed to pitch at least a full six innings a mere five times, one of which was his final start of the regular season. To my mind, this is arguably the most important factor from a strategic standpoint because it maximizes the advantage of starting Schwarber behind the dish in the first place. K-Schwarb (is that a thing?) catching allows for the most potent iteration of the 2016 Cubs offense. Whenever Maddon gets to fill out a lineup card featuring both Jorge Soler and the Schwarbinger of War (is THAT a thing??) without the catcher position as a weak spot, you ideally want to be able to stick with that lineup for as long as possible. The last thing you want is to have to go to the bullpen–and thus the bench–in the top of the 4th inning, particularly given that the bench on those days will be half comprised of catchers. Joe Maddon has talked about the importance of rest for players, but I wonder if he doesn’t deserve a day off every now and then, himself. Set a dream lineup behind a pitcher who works deep in games with the astounding regularity of an Activia-fueled Jamie Lee Curtis, and the game practically manages itself. Maddon can take those days off to play disc golf, which is something I strongly suspect he enjoys.

You make the case for familiarity, and it’s a fair point, but I think familiarity should be a distant afterthought compared to everything else I’ve mentioned. Yeah, Hammel and Schwarber have a bit of a head start developing chemistry, but Lackey’s repertoire should be relatively easy for Schwarber to adapt to, and as for Lackey’s part, a fourteen year veteran should be plenty accustomed to working with new catchers by this point in his career. Lackey simply makes too much sense for me to be satisfied with another option. Hammel would be my second choice, but it’s not a particularly close second.

With the depth we have and guys cycling in and out of the lineup, I think it makes a lot of sense to have Schwarber catch our #5 starter, and then give Schwarber a day of rest when Arrieta is on the mound. In theory, that day is the day of the week in which we don’t need as much offense, and can afford to sit Schwarber.