Last night, Jake Arrieta did something disgusting. It was so disgusting, in fact, that the guy he did the disgusting thing to could barely even react—he just put his head down and wordlessly walked away. I’m speaking, of course, about the changeup Arrieta threw to strike out Mike Trout in the fourth inning of last night’s 9-0 mopup of the Los Angeles Angels. Take a look for yourself, and try not to scream:

Pretty gross, right? Here’s the thing, though: a changeup that good, and of that particular type, is sort of a new thing for Arrieta. I mean, he’s had a merely excellent changeup for a while. Last year, he went to the pitch 4.5 percent of the time, averaged about 89.6 miles per hour when he threw it (that’s a five mile-per-hour separation from his four-seam fastball), and got about 2.4 inches of vertical break (or backspin, relative to what gravity would do to the pitch anyway). FanGraphs rated it as the seventh most-valuable changeup in the game, last year.

But last night, that already-elite pitch got better. Now, sure, Arrieta only threw his changeup three times last night, so all the usual small sample caveats apply, and perhaps negate the point of this piece to some extent. Still, they were three beautiful pitches. They were a little bit slower than the ones he threw last year—88.6 miles per hour, though with a one mph error bar—but they had a lot more backspin to them. Remember how I told you that, last year, Arrieta’s changeups broke an average of 2.4 inches vertically? Last night, Jake Arrieta’s three changeups broke an average of 5.5 inches, or three inches farther away from what gravity would do to them if he threw the pitch straight ahead without any backspin. In other words, this new changeup looks a lot more like a fastball than the old version. Its three-inch jump from last year is sort of ludicrous. You might even say it’s disgusting. Here’s maybe a better way to demonstrate it: 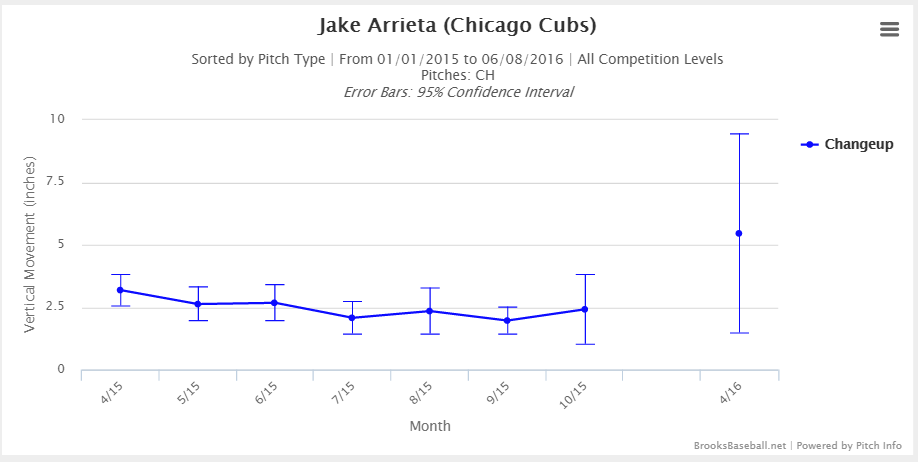 The nice clean blue line at the bottom of the image is Arrieta’s vertical break on the change in 2015—as you see, it doesn’t stray too far from the 2.5 inch range. And then, there’s his three pitches last night. Sure, there’s a huge error bar on the pitches (the big vertical line you see running up on down on the right hand side of the page), but that’s to be expected this early. And I think that this new, closer-to-a fastball-but-slower changeup might be here to stay, at least every now and then, against the right opponents. Why? Well, let’s break down the chart above by game, rather than by month.

This way, we can get a bit of a better sense of the range of possibilities, when Arrieta throws his changeup. And you see two spikes where the vertical break comes close to where it was last night: October against Milwaukee, and August against the White Sox. What do those teams have in common with the Angels? Well, they don’t have a whole lot of power, really. All three teams, last year, featured ISOs below .150, and in the bottom half of the league. These are great teams, therefore, against which to throw a pitch with a little more risk to it (because it’s slower, and might hang in the zone more), in an effort to fool hitters—if the ball stays up in the zone, they might not be able to hit it out anyway.

I’m not a pitching coach, and I don’t have the inside scoop on what’s inside Jake Arrieta’s head, nor do I have the means to ask him about his changeup in the immediate future. But I do think it’s reasonable to tentatively suppose, based on the available data, that Arrieta has found in himself the ability to throw two types of changeups: a fast one, which breaks quite a bit, relative to gravity, and a slow one, which barely breaks at all, but looks quite a bit like a fastball. Against teams with little power, he breaks the second one out, and things like what happened yesterday result, because the team has a hard time distinguishing the pitch out of the hand. Against disciplined teams with power? He lets the pitch drop a little more, and puts some more velocity on it to protect against mashers. This isn’t something we can say definitively now, of course, and it’s totally possible that it’s either (a) small sample size nonsense or (b) Rian’s a bad analyst nonsense. It is, however, something I’ll be keeping an eye on as the season progresses.

My thanks are due to Brendan Miller of CubsRelated for a critical correction to this piece.

Tags: Changeups, Elite, Jake Arrieta |
Rian Watt
Follow @rianwatt
Rian is the editor-in-chief of BP Wrigleyville, an author at Baseball Prospectus, and a contributor at VICE Sports and FiveThirtyEight. He's based in Boston, and misses Chicago every day.
read more from Rian Watt

1 comment on “The Arrieta Changeup: An Old Friend, Not Seen Since Milwaukee”

The best part of all of this is how effortless he looked last night. With all the discussion of stricter pitch counts, Arrieta’s ability to successfully pitch to poor contact last night was a nice boost.