It’s an accepted fact that Joe Maddon is a progressive manager. We don’t know anything about managing, not really; we don’t know how much control they have over what they’re doing, and we mostly see the very small part of the job that manifests itself as in-game strategy. But what we do know has given Joe Maddon a reputation as a progressive manager, and some of his quotes before the start of this season fit neatly with that perception.

After a 2015 which saw Jake Arrieta falter in the postseason, which some blamed on fatigue, Maddon opened 2016 with a declaration that this season would be different.

“From a psychological perspective, him completing games last year, him pitching deep into games last year benefited him last year and in the future,” Maddon said. “Now it’s up to us to monitor that to the point where, listen, you know you can do it, you’ve done it now and you know how good you are now, but permit us to protect you a little bit in the latter part of the game.”

That was a welcome statement, not only because of concerns about Arrieta’s innings totals. Pulling pitchers early in the game keeps them fresh, but it also keeps them from facing batters a third or even fourth time in a single outing. There’s a pretty substantial body of research, starting with The Book, the sabermetric tome by Mitchell Litchman and Tom Tango, showing that batters gain an advantage as they face pitchers subsequent times in a game, so that by the third time through the order, a frontline starter is basically the equivalent of a run-of-the-mill reliever. Maddon said he’d be shortening the starters’ leashes to avoid fatigue, but the times through the order penalty provides just as compelling a reason to do so.

Through the first 40 percent of the season, however, Joe Maddon hasn’t lived up to his word, or his reputation. He’s been leaving his starters in longer than expected, and indeed, longer than nearly everyone else in the league. 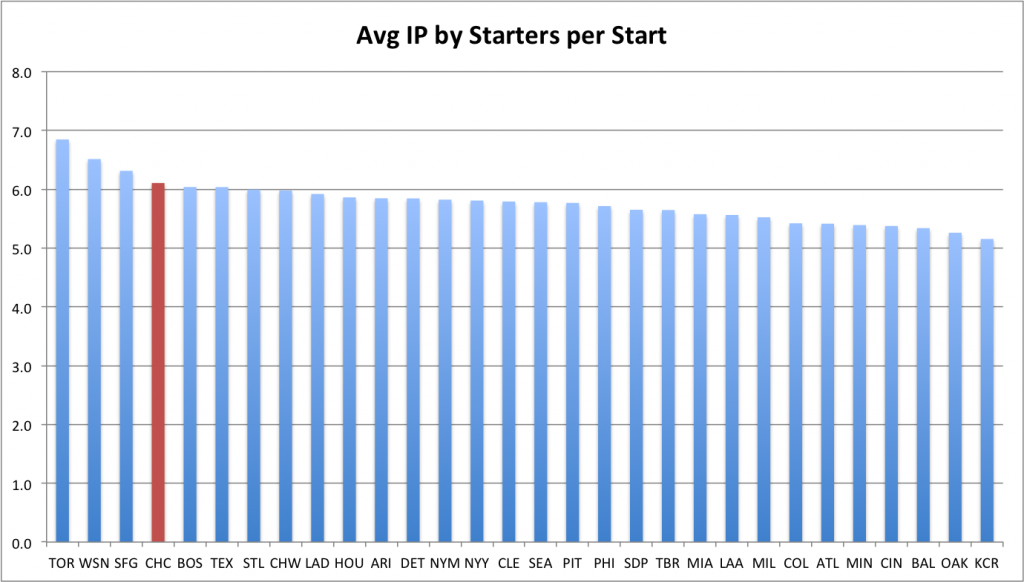 Thus far, the Cubs are fourth in innings pitched per each start (and also fourth in batters faced per start, not shown in the above chart). Arrieta in particular is only three innings off of last year’s pace, and the rest of the starters are also shouldering a heavy workload. Still, there’s a temptation to look at the Cubs’ sterling record and conclude that any criticism is misplaced, and that temptation is especially strong here: Cubs pitchers have the third-highest WARP leaguewide, so what’s wrong with leaving the starters in for a bit longer?

We saw a possible answer to that question on Monday against the Nationals. Kyle Hendricks started the sixth having looked a bit shaky already, with only four strikeouts and three unintentional walks. He had thrown 87 pitches, and was facing the bottom half of the Washington order for the third time. The next three batters went home run, double, single, and after Max Scherzer laid down a bunt, a 1-1 tie had turned into a 3-1 (and soon, 4-1) deficit on Hendricks’s watch. Justin Grimm came on and got the next two outs, and the bullpen would finish the game without giving up a run. There’s no guarantee the bullpen wouldn’t have coughed up the tie, obviously, but seeing Hendricks struggle with a moderately high pitch count on his third time through the order necessarily brought those preseason Maddon quotes to mind, in a slightly different light than before.

So what might have made Maddon deviate from his plan? There are a few possibilities, but none are completely satisfying. First, as mentioned above, the Cubs starters have been very, very good, and that’s a totally valid reason to give them a slightly longer leash. Cubs starters have also perhaps looked better than they actually are. Hendricks’s ERA-DRA gap has been 1.19 (34th-largest in MLB (minimum 30 innings)); Arrieta’s, 1.33 (26th); Lester’s, 1.60 (14th); and Hammel’s, 1.88 (9th). Lackey’s is an unexceptional 0.15, but the overall pattern is clear. The Cubs also have a great defense, and DRA is designed to control for defense while ERA imputes defensive ability to the pitcher. I’m not suggesting all those gaps are undeserved—several of the Cubs’ starters are known to have an ability to generate weak contact, and naturally run low BABIPs and better ERAs than DRAs—but it’s safe to assume some of those gaps aren’t a result of the starters’ innate talent. If Maddon is overestimating how good these pitchers are by relying on their ERA rather than their context-neutral stats, letting them pitch deep into games is not a sound decision.

By the same token, it makes sense to think the performance of the bullpen has impacted Maddon’s in-game decisions, and if Maddon’s relying too much on ERA with the starters, you’d think he’d be doing the same with the relievers. But nearly all of them also have better ERAs than DRAs (which makes sense; they’re all pitching in front of the same excellent defense), and thus, like the starters, look better than they have been (to the best of our knowledge). Hector Rondon, Travis Wood, and Trevor Cahill all have middling DRAs, but very good ERAs, with gaps of 1.44, 1.84, and 2.54 respectively. If Maddon thinks the bullpen has been worse than expected, he’s probably right, but the way for him to reach that conclusion is to ignore ERA. If he ignores ERA, he should also reach the conclusion that the starters have been worse than they looked, and he should be sticking with his preseason, short-leash strategy. So what gives?

I can think of two possibilities. Or three, rather, though the last two overlap. The first is extremely convoluted, and already, that’s a reason not to believe in it, but here it is anyway. We know Maddon is a smart guy, conversant in advanced stats; maybe he knows not to trust small samples. Maybe he looks at the relievers and their 20 innings apiece, knows their ERAs aren’t reliable in such a short period of work, and falls back on what he sees in their fundamentals, which make them look much worse. On the other hand, the starters are up around 60 innings, so perhaps Maddon feels he can trust their ERAs, leading to an overestimation of the talent of the starters and a proper estimation of the talent of the relievers.

That’s a bad theory. It relies on Maddon falling in a very narrow band of knowledge, just enough without having too much, and no one around him adding or subtracting from that information, including all the other very smart people who are part of the Cubs organization. It might be the right explanation, but I would be very, very surprised.

This article began with the premise that Maddon was smart, and the Cubs front office has demonstrated itself numerous times to be very, very smart. Teams have access to countless paid analysts, loads of proprietary data, and the ability to talk candidly with the actual players, all things those of us on the outside can never have. When those teams make decisions that seem inscrutable or indefensible to us, a possibility we have to consider is that we’re working with faulty information. When the decisions are only somewhat sub-par, as seems to be the case with Maddon’s usage of the starters and bullpen, that possibility is even stronger. Maybe Maddon knows something about the mentality of the different pitchers that means leaving them in, even to the point of coughing up some runs in the later innings, is better for them and the team in the long run. This Cubs team seems to have fantastic chemistry, a topic we’re very bad at quantifying; maybe one reason for that is Maddon’s trust in his starters. Alternately, maybe he knows, thanks to the aforementioned analysts, that the relievers are worse than we think they are, and the starters are better than we think they are, and he’s removing them at precisely the right time to minimize the runs scored by opposing teams. If that’s not the case—if he’s leaving the starters in for the weird, just-smart-enough-and-not-too-smart reason given, or some other reason entirely—then yes, this probably isn’t great, and it would probably be better for the team if he had a shorter leash. That shouldn’t be our first conclusion, however.

It’s frustrating to watch this happen, that much is undebatable. I wondered if Maddon would pull Hendricks before the sixth on Monday, and when he didn’t, I got to feel the hollow satisfaction that comes with predicting a disaster in advance. That frustration, however, stems just as much from the frustration of confronting the unknown as it does from watching a manager make sub-optimal decisions. We fans have access to more and better data than ever before in baseball history, and we are almost certainly still trailing each team by a huge margin. Unless we catch up, there will always be baffling decisions, and we won’t be able to tell if they’re mistakes or the result of an information asymmetry. In general, I’d lean toward the latter. These people are smart! It’s rarely going to be wrong to trust them.

Great write-up. We were talking about this on our podcast, and while I didn’t have the numbers, I had the sense that Maddon’s leash was too long. It’s kind of bewildering — Arrieta admitted last year he was gassed by the NLCS, and you’d like to think Maddon took that lesson to heart. Plus, with such a big lead in the division, there’s more room to work with (unless that means Clayton Richard). I said this in my Sunday recap, but if this were Dusty Baker, he’d be getting excoriated. I know there are a lot of other things that Maddon excels at compared to Dusty, obviously, but this seems like a strange blind spot.

If the Cubs have decided to leave pitchers in, I feel that they likely have a reason. Since most of these things have worked out, I would trust them.
The part I have a problem with is this team is pretty media savvy. Then why tell the media you aren’t going to do that. Why say anything at all one way or another

Great post. I don’t know why this is happening–I’d like to see starters get less work, but considering the 3 blown saves thus far in June, I can understand why he may be limiting bullpen usage.

That is third-highest in the league, but it is also only two pitches higher than the MLB average. Plus, I think their pitches per start are higher than normal because they have been doing so well. If they had two or three games where their pitchers were knocked out in the third inning instead of pitching through seven, their average Pit/GS and IP/GS would be right in the middle of the pack.

You’d think that with the Cubs’ historically high run differential that they could afford to remove their starters earlier, rather than later, in many games. This places even more suspicion as to why they are above league average in pitch count and fourth in innings pitches per start. I would guess they know how bad their relievers are, or would be, with a heavier work load and in tighter situations. Thus the team’s early talk about trading for more relief help and having recently signed a couple of veteran relievers to minor league deals.

The umpire walked Hendricks final batter ergo both he and maddon should be scourged!