Here we are, August 23: the Dog Days, the Stretch Run, the days of Magic Numbers and Playing out the String. If you squint, you can see the final strains of the regular season, shrouded in fall freshness and early darkness. The end is nigh; we’ll begin to look upon who did what, and how, and why. It’s with this spirit—that of slightly premature retrospection, like a Sunday night review of Frank Ocean’s Blonde—that I gaze upon Kris Bryant’s batting line and rejoice.

As of this writing, Bryant is hitting a cool .299, with NL-leading marks of 32 home runs and 100 runs scored, and an OPS 100 points higher than that of his rookie season. He’s cut down on strikeouts, perhaps his only flaw last year, with a 22 percent strikeout rate that bests 2015’s by eight percentage points. In 121 games, he’s accumulated 7.3 WARP, 6.1 bWAR, and 6.6 fWAR, if you’re into that sort of thing. We know he’s good, and the league knows he’s good, and the MVP voters are going to know he’s good. Perhaps even the best. So what’s there to write?

Plenty, actually, since Bryant is killing sliders this year. That’s a big factor in why his strikeout rate has plummeted, which is itself one of the biggest factors in Bryant’s evolution from top-five third baseman in his rookie year to possible top-five position player, period. A few weeks ago, I checked out the reasons why Javier Baez has struck out less frequently this season, and I’ll use some of those same analytical tools here. A peek at Bryant’s whiff percentages throughout his big-league career shows a stark change occurring between the third baseman’s two seasons. 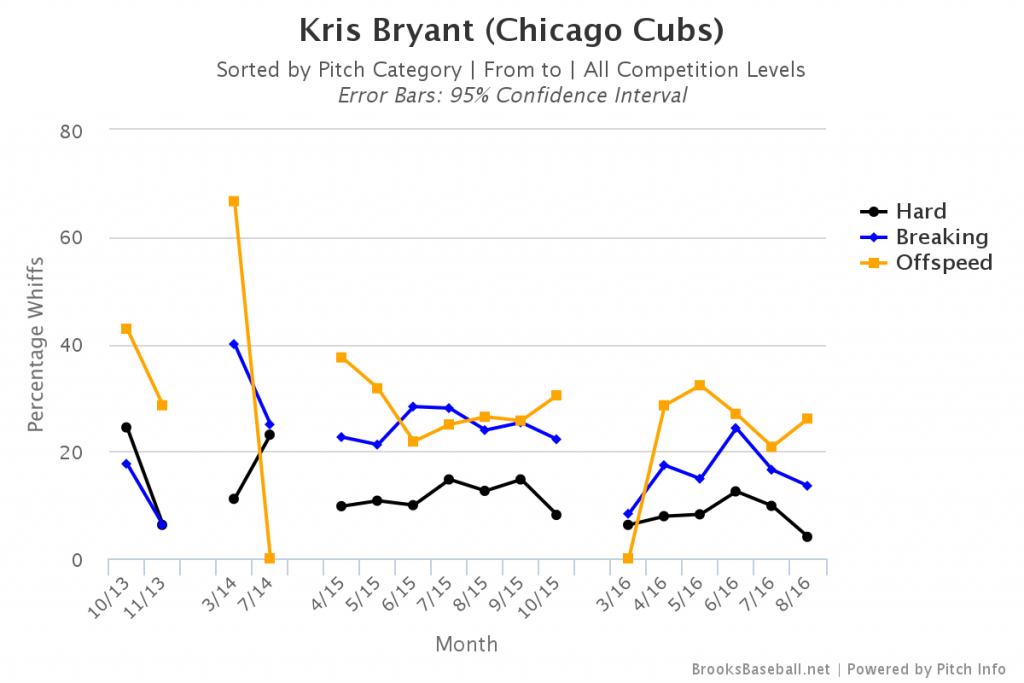 If one ranks Bryant’s months by whiff percentage versus breaking stuff, then, in every month this season, Bryant has posted a rate lower than in every month last season, except one. That month, June 2016, is the only one in this quickly closing campaign in which he whiffed at over 20 percent of breaking pitches he faced. His ability to make contact with fastballs is also evident, as his whiff rates are markedly better than last season, but his success and adjustments against fastballs is well documented.

If we break down Bryant’s performance versus specific pitches, we can see other positive results.

In 2015, Bryant posted a batting average of .241 and a slugging percentage of .353 against sliders, predictably unremarkable for someone whose power numbers come mostly from mashing fastballs. This year, though, Bryant is also slugging those sliders into oblivion: those numbers are now .306 and .506, respectively, and he’s got a .200 ISO to show for it. As a percentage of swings, Bryant has cut his whiffs on slide pieces from 52.03 percent to 37.30, a drastic improvement in contact. One look at his zone profiles from each of his two seasons makes those numbers visually manifest. 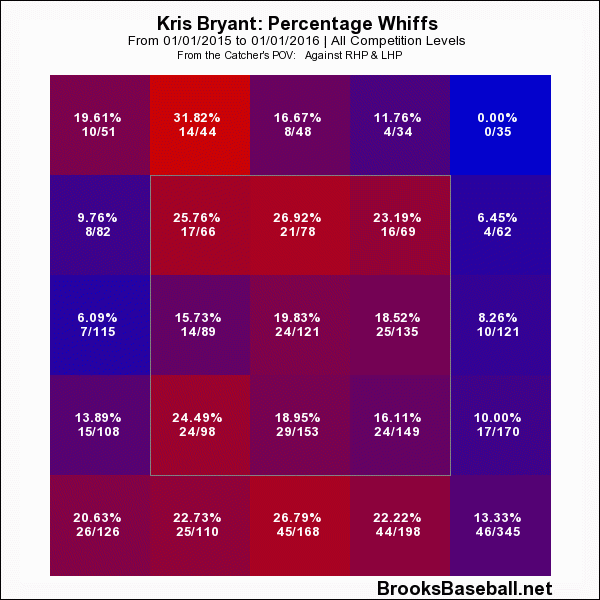 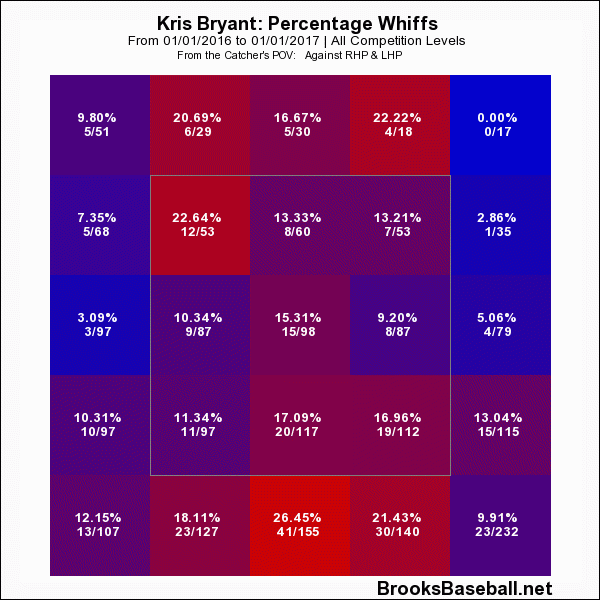 In some sections of the strike zone, Bryant has slashed his whiff rate by a bigger percentage than the clearance sales at Sports Authority before the chain joined the Great Spalding in the Sky. This is heartening, since most concerns voiced over the winter bemoaned Bryant’s bottom echelon contact rate.

Bryant’s not just making better contact, though. As a percentage of flyballs and line drives hit, he is parking more sliders in the bleachers, his 14.71 percent rate an improvement upon last season’s 8.82 percent. To analogize with calculus (a discipline whose steely grip I failed to escape in my final semester of high school): if the derivatives of Bryant’s outstanding 2016 numbers are his better contact and slugging rates, and his fewer strikeouts, then the derivative of those elements is his leveled out swing. Quite a bit of baseball writing hay was made in spring training when the public learned of Bryant’s plan to even out his severe uppercut swing. Even more was made when it became obvious that the mechanical adjustment was working, to some effect. Now we have nearly five months’ worth of plate appearances, and it seems fair to conclude that Bryant’s altered swing plane has produced results, as many hypothesized. Sometimes we writers get one right, although “Kris Bryant becomes a really freakin’ good player” is hardly a bad bet to make.

There is an interesting wrinkle in these numbers that might be a harbinger of future struggles for Bryant. His performance versus sliders is better, but his performances versus curveballs and changeups have taken a step back, and pitchers are now throwing him more of the latter. With seven weeks left in the season, Bryant has already seen ten more curves than he did last year, and his .422 slugging percentage against the pitch is demerited by his .178 average. Against the change of pace, he’s worse: a .164 average and an abysmal .236 slugging percentage, against a pitch he sees even more often than the curve. Looking at the percentage of pitches by type that Bryant has seen, monthly, the new plan of attack becomes obvious. 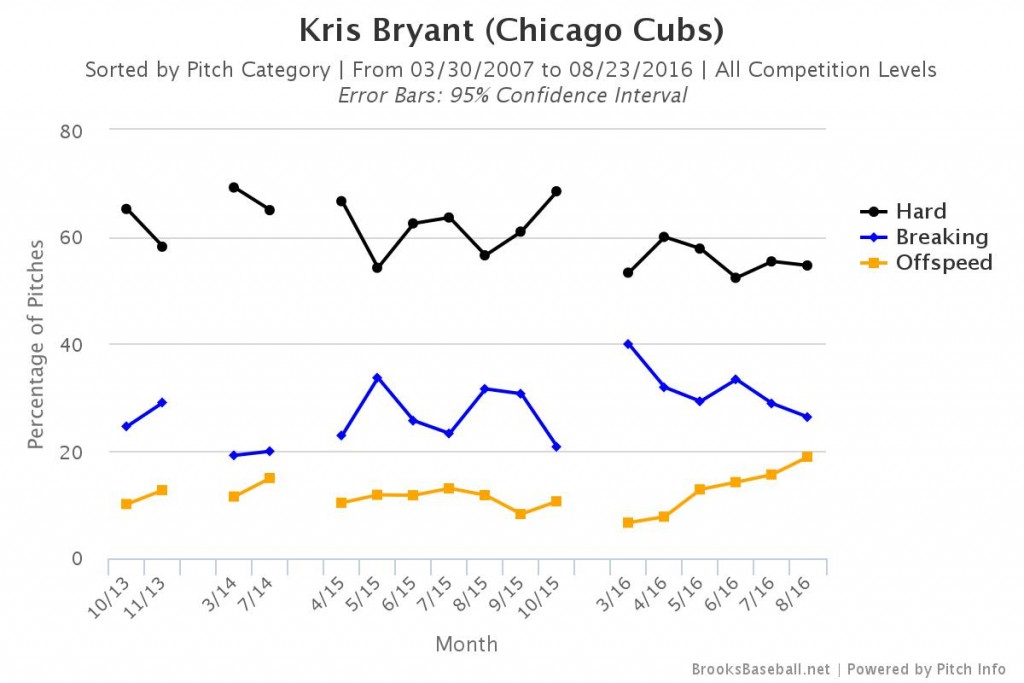 Every month this year, Bryant has faced an increase in offspeed pitches. This month’s nearly 19 percent mark is the most changeups he’s seen in his career, and playoff starters are going to exploit Bryant’s weakness versus the pitch, and eschew the fastball, if he doesn’t adjust back.

Major-league pitchers are smart, and they’re adjusting to the success of Bryant’s new swing plane by attacking him with a different slate of pitches. But, just as we have watched Mike Trout make weaknesses into strengths and counter approach changes the league makes against him, Bryant too has the baseball smarts and physical ability to counterattack. We saw Bryant in the throes of a slump last July, only for him to work with hitting coach John Mallee and devour the National League in August. Watching the ebb and flow of baseball strategies is an endlessly pleasurable experience, and we get to watch it in real time with Kris Bryant. That’s even more joyous than pouring over those gawdy season stats.