It’s easy to get rosy-eyed when talking about Jake Arrieta. His devotion to his craft, his classically sculpted body, his majestically hirsute chin, his adorable kid, and his damn good numbers: all are qualities that inspire writers to snag the purplest of pens and analogize Arrieta to, say, an obscure poet or a 19th-century frontiersman.

Arrieta’s recent struggles — if you’ve missed hit, his recent starts feature more fives and sixes in the runs and hits columns than his starts from last season, which seemed to be input in binary — want for a new metaphor, and for an attendant explanation. So, forgive me: Jake Arrieta’s finely tuned mechanics are shot, and he’s going to need to pick up a wrench and get to work.

At the beginning of July, as his problems began to manifest in the box score, I speculated that it was a failure of mechanics producing Arrieta’s poor results. If there were a graphical equivalent to a scary story told around a campfire, it would be this: 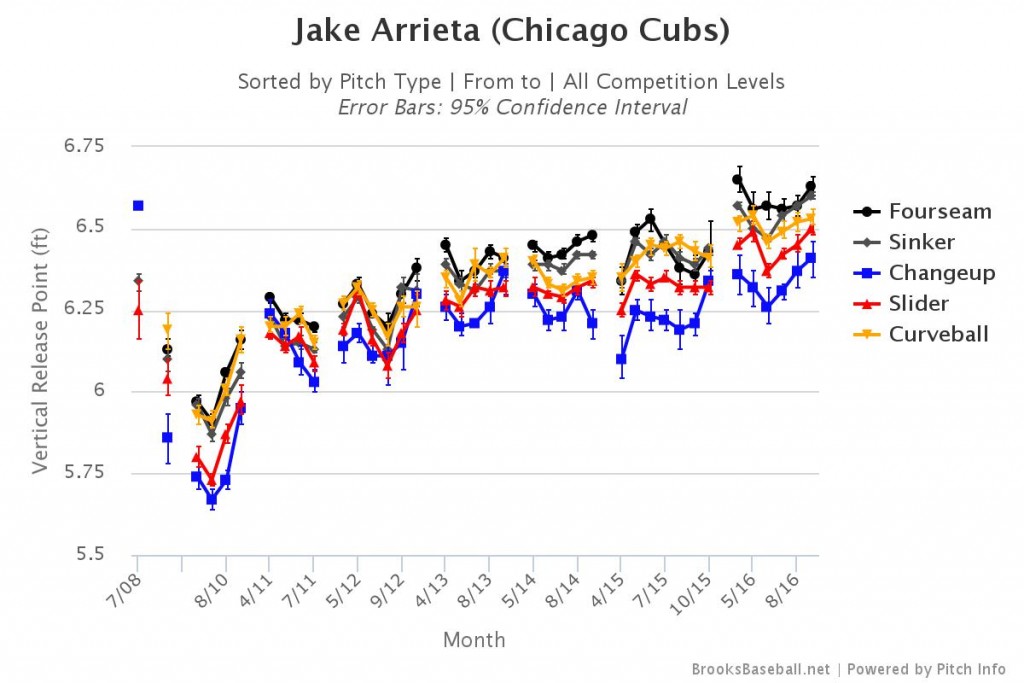 Here we have a case of the predominant narrative — that Arrieta greatly altered his pitching mechanics upon joining the Cubs and pitching coach Chris Bosio — finding a cozy home in the graph. Arrieta bumped up his vertical release point, creating a different plane on which his pitches traveled, a key factor in how he turned his slurvy, cutter-ish slider into one of the most dominant pitches in MLB. This season, however, Arrieta is throwing more upright than ever befor; he’s left the “happy zone” in which he has lived the past two seasons (at about six feet, six inches of height) for the soaring reaches of six feet, eight inches. While a two-inch difference might not seem like much, it is a consistent departure from the release point creating the necessary movement and plane on his pitches, and therefore a departure from the release point from which he has derived his Cy Young-worthy success.

Vertical release point is only a portion of the equation, however. Arrieta’s horizontal release has crept toward center as he has thrown more over-the-top, further altering the angle at which Arrieta’s pitches attack the strike zone. 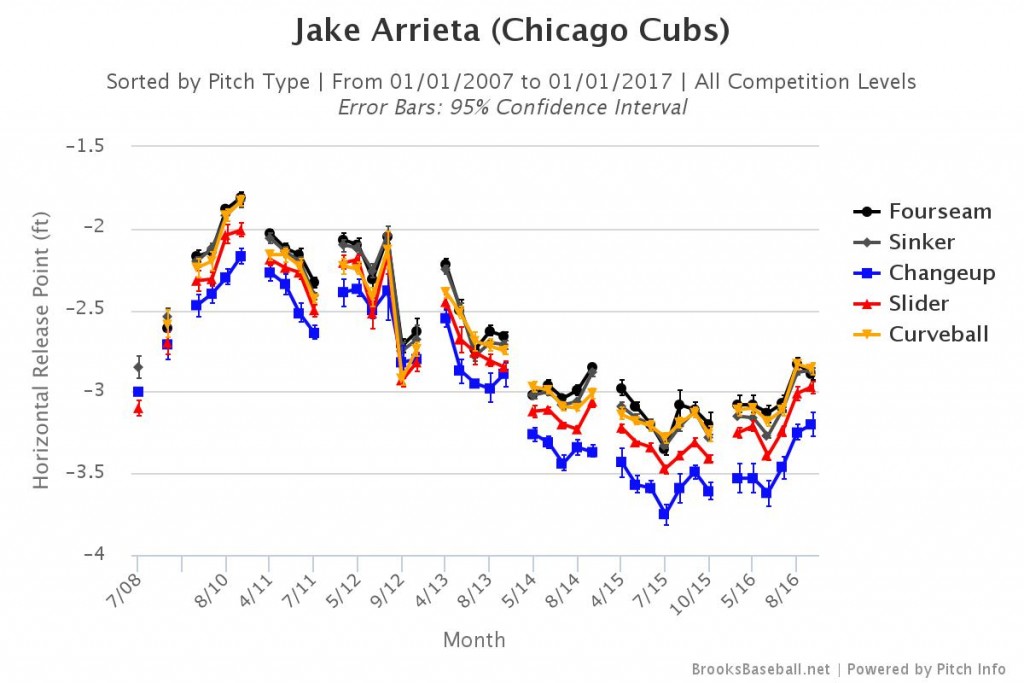 Again, we see the evolution of Arrieta’s mechanics as he absconded from Baltimore and found a home in Chicago. The second half of 2013 saw Arrieta move his release point toward third base (more negative on the chart), and in 2014 and 2015, Arrieta’s motion became fully realized.  His “crossfire” action, wherein he angles his shoulders and lower half toward third base before snapping back toward center and firing the ball home, is what has generated velocity, spin, command, and general nastiness, particularly on his devastating slider.

So, when we look at the past three months of Arrieta’s horizontal release point, it is troubling to see him inching back toward center. Another result of Arrieta’s mechanical changes this season is poor location: compared to last season, the righty is missing more toward the center of the zone, failing at keeping the ball away to right-handed hitters. This is only with pitches down in the zone. Arrieta’s hit the center quadrant just below the strike zone nearly ten percent of the time this year, by far the most of any identifiable quadrant via Brooks’ PITCHf/x, and 80 percent more often than in 2015. The fusion of these two elements–higher release point, and closer to center (i.e. farther from the third base side)–is an insidious combination that has sapped the righty’s ability to locate his pitches, and also, as we’ll see, to generate swings and misses. 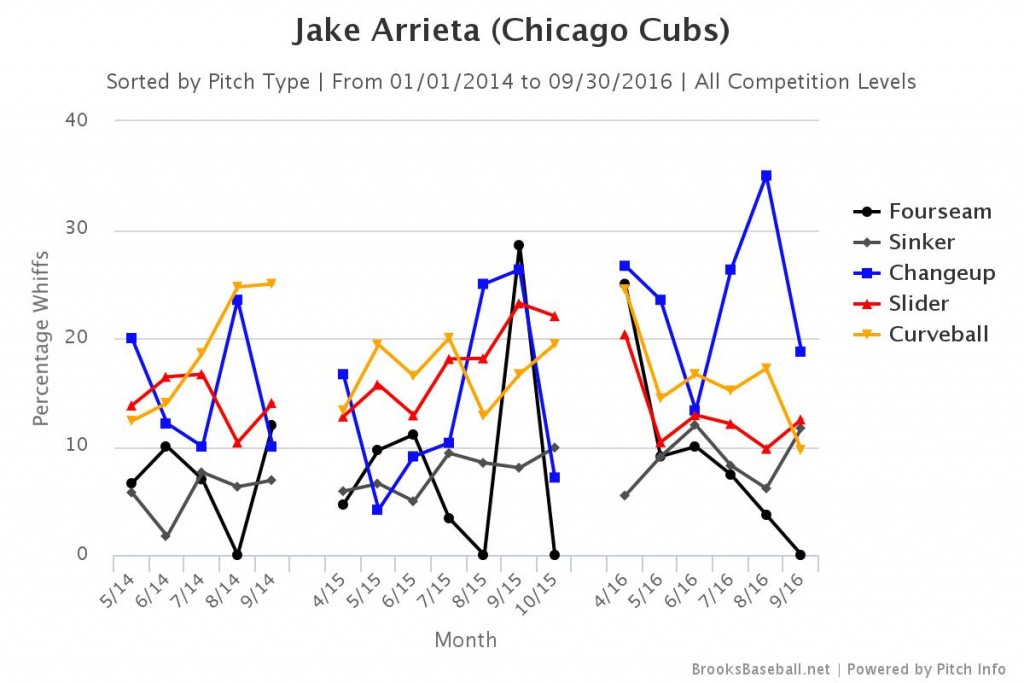 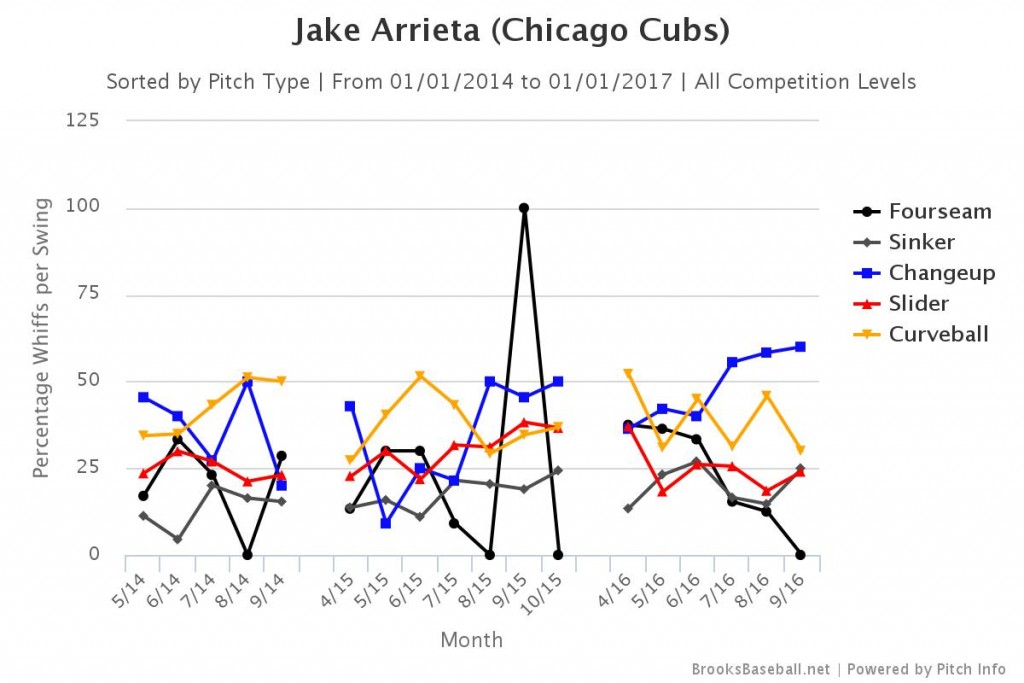 As Arrieta’s arm slot has moved, his effectiveness has waned. There’s the increase in whiffs that Arrieta generated with his slider over the last few months of 2015, when he was the best pitcher on the planet, and there’s a significant decrease in slider whiffs as 2016 has worn on. His ability to induce swings and misses from hitters since May has been troublingly poor, coinciding with his general performance.There are two final visuals that will help us grasp the gravity of Arrieta’s faltering mechanics, and they are the most alarming of the bunch. 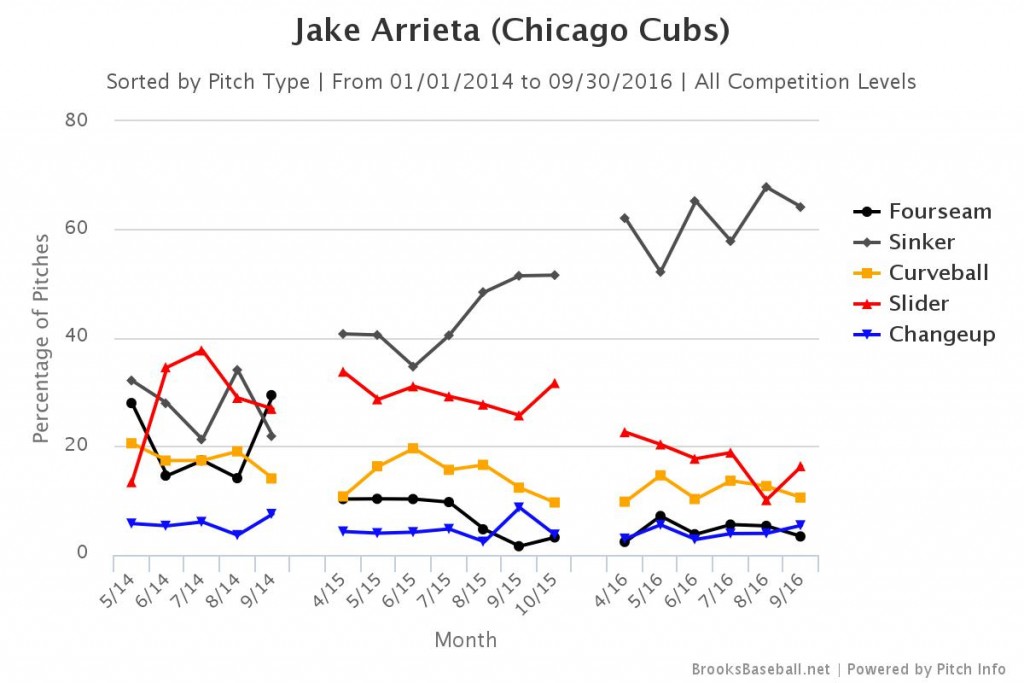 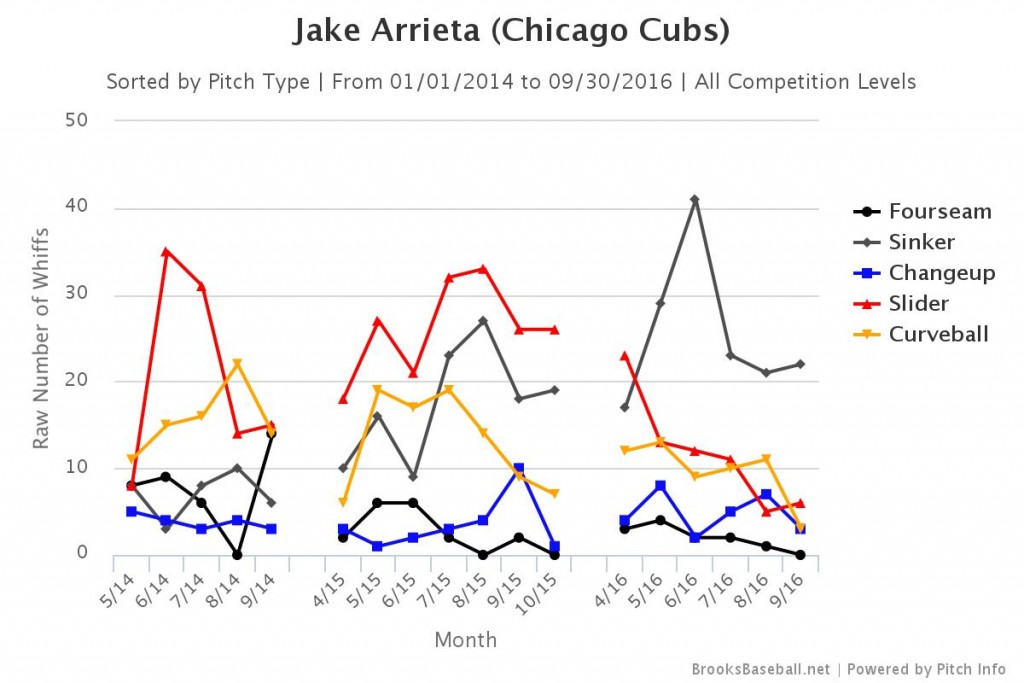 While Arrieta’s increasingly upright delivery might be an unconscious trend, the result of fatigue or other factors, he has made the conscious decision to reduce his slider usage and up his sinker usage, as evinced by the above chart. Whereas in 2015, he threw the two pitches close to the same amount, this season those pitches have diverged: he’s throwing his sinker an astounding 60 percent, up from last year’s 40-50 percent, and his slider a mere 20 percent, down from 30 percent most of last year. It’s likely that, as his command has deteriorated due to his mechanical imprecision, Arrieta has chosen to throw more sinkers in order to establish the strike zone and throw more strikes. The result is apparent in the bottom chart: while Arrieta is getting a few more absolute whiffs on his sinker, his slider whiffs have taken a nosedive.

Unfortunately for Arrieta, his failure to adhere to the pristine pitching motion he had developed in his first few years in Chicago has nudged him into a vicious cycle. Drifting mechanics have resulted in some command issues, command issues have forced altered pitch usage and a different plane on his slider, and altered pitch usage and slider motion have produced a less effective combination of pitches (likely in sequencing) that has resulted in fewer swings and misses.

Thanks! I appreciate your kind words. If I only had Bosio on speed dial… (I’m sure he’s already spotted this.)

I wonder how much of this drift is due to usage. He pitched a career high innings last year, often in high leverage situations. Perhaps the small change in mechanics is in order to keep his velocity up, but negatively affecting his other pitches.

Saw recently that he’s actually worked on decreasing his velocity slightly in order to re-calibrate his mechanics, so you might be on to something here.

I expect that a good portion is due to fatigue. Arrieta has a weird windup: he looks like he’s effortlessly throwing the ball, but there’s really a lot of movement (the crossfire action). If decreasing his velo is going to help him get back to his good mechanics, then that’s a good route to explore. But he’s pitching very upright, and it’s borne out by the eye test. Thanks for the comment, Victor.