Emotions are a very subjective thing—we all experience them in our own unique way. It’s hard to describe a collective emotion when things happen to a large group of people. Some people cry, others smile, and some just sit there dumbly. As someone who writes about baseball, it’s very hard to separate your emotions from things like the last game of the 2016 season.

Math can help with this. Math doesn’t care about the human element or how you feel or how long you’ve been waiting for something to happen. Math just runs some numbers, carries the one, and spits out a result.

If you wanted to take a cold, hard, objective look at the collective experience that was game 7 of the World Series, you could look at the box score, which tells some of the story. But I like looking at the Win Expectancy chart from Fangraphs:

The chart is cool because it tells a very compelling story that isn’t contaminated by the human, subjective experience we each had during the game. I’m going to try to tell you what it was like to be there while couching with as many objective indicators as I can. I’m also going to pour my heart out to you, so be ready for that.

It started with Dexter Fowler’s home run in the first inning. Right away the math shifted from “these teams have an even shot of winning” to “the Cubs have a slight edge.” While the momentum did sneak over into the Indians favor for just a little bit there in the 3rd inning, I want you to focus on how that line kept dipping further and further into the Cubs’ favor.

Don’t look at the 8th inning yet! I want to add some subjective color that goes hand in hand with the objective math. It doesn’t dispute it or disagree with it. In fact—it matches it perfectly.

From the minute Fowler hit that home run, I thought that the Cubs just might win the game. So did Cleveland fans. There was some excitement when they tied the game, but there was also an inevitability as the game went on about something that nobody really wanted to verbalize (not even Indians fans): the Cubs were going to win this game.

As the line dipped down lower and lower and the innings kept passing, you could feel the tension in the stadium. You had over 38,000 rabid fans in this one place watching one of the greatest games ever played, and they could all feel that line dipping steadily down. Some of them—call it, 40%—were quietly euphoric. They didn’t move from their spot. They didn’t change their fist-bump routines after every out. They didn’t go to the restroom (except for Joel Reese, who we can later blame for the 8th inning—thanks Joel). They just sat there hoping that doing nothing would just move that line of cold, hard objectivity further towards one of the most incredible moments many thought would never happen.

But no one was talking about that. No one except the really drunk Cubs fan standing next to me and going on and on about that line. Nobody wanted him there. Cub fans wanted him gone—he was jinxing the whole thing. Indians fans wanted to punch him in the face for verbalizing what we all knew: the Cubs were going to win this game.

One Indians fan (all of whom were very nice and polite, notwithstanding a later chunk of this piece) tapped me on the shoulder and whispered, “Get your buddy to calm down or the cops are going to take him away.”

I felt kind of dirty leaving a fellow Cub fan hanging out to dry like that, but I was already a nervous wreck and I didn’t want to change what I had been doing the whole game, which was to quietly stand among a group of Indians fans in a standing-room only section in deep right field. I was mostly quiet, but there were short, quick bursts of fist pumping and high fiving, which I quickly pushed back down into that growing knot in my stomach.

As a side note, that same fan told the drunk guy in a very nice, non-condescending way to please chill out or he would miss the rest of this game. That the police would come get him, which they eventually did.

At that time, he had no idea what he was missing. That line—and the emotions of every single one of those 38,000+ fans—was about to go for a crazy ride no one will ever forget.

This is all backstory for what happened in the 8th inning. In order to fully appreciate the 8th inning, you have to understand that this game was pretty much done.

When Mike Napoli struck out looking for the second out of the 8th inning and no one on base, the math said the Indians had a 3.8% chance of winning the game. And we got to this point in a pretty gradual, steady drop that really began in the first inning with Dexter Fowler’s home run.

At that point the Indians never had the lead and were only tied for something like 20 minutes.

Subjective aside alert: The stadium was a collection of 38,000 people, but being one of those people meant you had access to the collective consciousness of the event. We were all just part of this thing that was happening but we could all feel as one. Not to get too touchy feely here, but the point I want to make is that, despite everyone keeping their feelings to themselves about what was happening (Cubs in 7), no one said anything.

We didn’t have to. We all knew that everyone else knew what was going to happen. I’ve only been to a couple of funerals, but leading up to it you know some basic facts: it’s going to be incredibly sad and you know that the casket isn’t going to bust open and your grandfather isn’t going climb out of there and go, “Holy shit you guys, what happened?”

But then Rajai Davis came up to the plate in the 8th inning with his team down by two runs and a man on base, Cub fans were about to get a horrible surprise.

By now the odds of the Indians winning the game were up to 12%, and it’s Aroldis Chapman throwing hard fastballs to Davis, a guy known more for his speed than his power (though Davis did hit a career-high 12 HRs in 2016).

You already know what happened, but here’s an attempt at being objective: 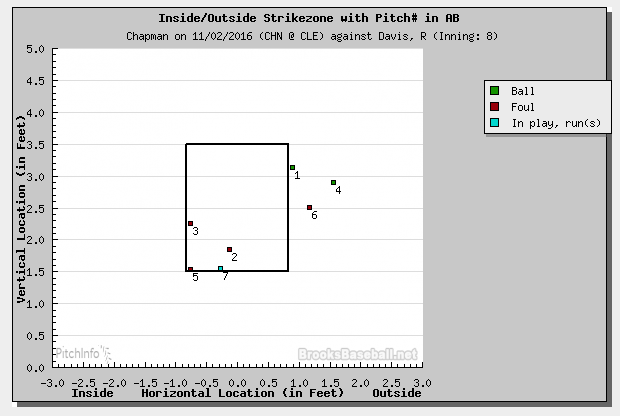 Chapman did a good job staying out of the middle of the plate (that second pitch was the closest thing to a meatball, a 99.2mph fastball). Chapman’s arm was probably not fresh and his command was probably not as good as it can be, but he was still pumping fastballs up there on the very high end of the scale.

Davis choked up on his bat like he was a baton twirler and then got the second slowest fastball Chapman threw him (98.4mph), right on the bottom of the strike zone. It’s a good pitch in that it’s hard, low, and away, but the problem is that’s somewhat of a sweet spot for Davis against lefties, according to the objective math of exit velocity (it measures how hard the ball comes off the bat): 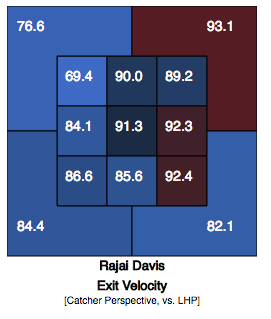 Davis jumped on the 7th straight fastball he saw right in that 92.4 quadrant and broke the space-time continuum by launching the ball off his bat at 101.5mph (and spiked the odds of winning from 12% to 52.5%—it was the fourth-biggest hit in World Series history):

For some reason, I decided to take the only video I recorded of the whole game right at that moment. What you see at the end of it is the camera going down to the ground, because after it happened I went down to one knee.

If you’re into boxing, here’s an analogy: The bell rang, the two fighters touched gloves, and the guy in the blue and white shorts threw a jab that cut the other guy’s eye open and dazed him for a minute. He was hurt and he’d have to fight hurt the rest of the way.

Then in the 12th round, with no hope of winning, the guy in the red and white shorts starts putting together little jabs here and there—nothing that hurt his opponent, but just enough to get some momentum.

And then out of nowhere he puts all his weight and remaining energy into one hail-mary punch and it just happened to connect right in that sweet spot in the kidney that just doubles you over and forces you down to the ground.

That was me: on the ground—on one knee—surrounded by what felt like 20 Indians fans jumping and jumping and screaming and shouting and throwing whatever they had in their hands up in the air. I stood up and put my hands on my head and just stared at the field. I was in a mosh pit of Indians fans as they celebrated. The stadium shook—it was exploding with cosmic energy.

When I look back at that play I get the chills. I hear the roar and see the celebrating and part of me feels bad: to feel what those Indians fans felt in that moment must have been unbelievable. But knowing what would come next was heartbreaking. It’s as if, during the trophy ceremony at the end of the game, the commissioner would say sorry but due to a technicality we’re giving this to the Indians. Confusion. Chaos. Panic. Heartbreak.

I was this guy, only surrounded by jubilant Indians fans pushing, shoving, screaming, and enjoying every second of that moment (as well they should have). 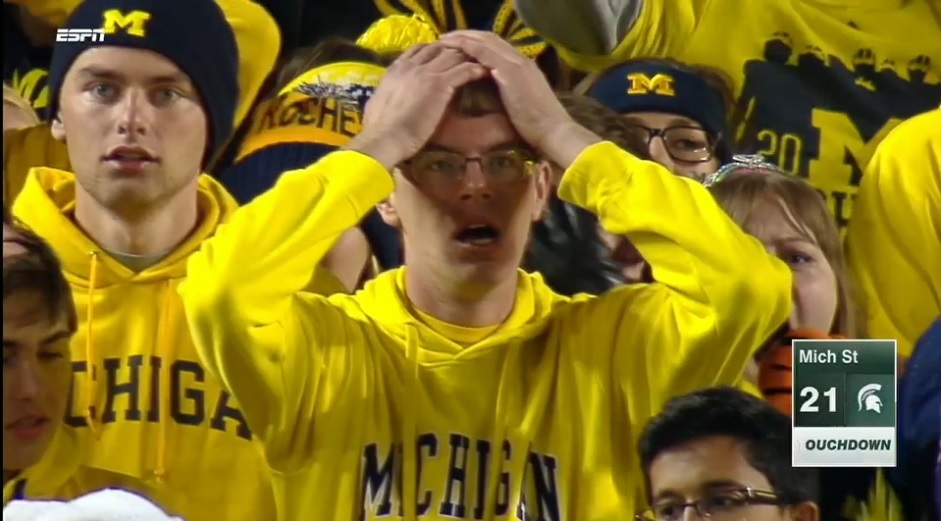 Then I got a text from Joel, who was also at the game.

“The Cubs are not winning this game.”

After a few minutes, reality started to set in:

There is a joyous air of inevitability in the stadium

We had switched positions in the blink of an eye—there was no way the Cubs could come back from such a blow. Everyone’s reality had been shattered and nobody could anticipate it happening for a second time—that just doesn’t happen.

After a rain delay, Ben Zobrist came up to the plate with a couple of men on, and it happened all over again.

Tags: Postseason, Rajai Davis, World Series |
Carlos Portocarrero
Follow @CarlosPorto
Carlos is originally from Guatemala, where nobody cared about baseball—not that he's bitter about it or anything. He now lives in Chicago, where he tries to get White Sox fans and Cub fans to just "get along."
read more from Carlos Portocarrero