On an unusually cold early April day, I stepped out of my car at Principal Park with no clue how to do the job I was there to do, and even less idea what would transpire over the next seven months. I was on a mission to conduct my first professional interview, seeking to discuss with Albert Almora Jr. the finer points of his recent swing changes. The journey Almora would take as the season progressed will live on forever.

Almora was the first selection of the Theo Epstein era; curious in retrospect as he’s the only non-college player drafted by Epstein in the first round. It was an early indication of just how highly Epstein and the rest of the Cubs’ top management value Almora’s maturity, instincts and baseball acumen.

Of course, the play we are commemorating never happens without Kyle Schwarber’s mystical story line finally coming to an end; a 7-for-17 effort in the World Series—capped by a tenth inning leadoff single in Game 7—just seven months after a devastating injury led to major knee surgery.

It was Schwarber’s knock that set the stage for Almora. The Cubs had just blown the most important lead they had ever held, seeing their win expectancy go from as much as 96.2 percent to 37 percent in the course of a few swings. It was the moment that felt “Cub-like in every sense of the term. For the first time since Fowler’s leadoff home run, the Cubs were suddenly serious underdogs in Game 7.

What came next prompted me to question Joe Maddon’s managing for the 1,420,369th time in the playoffs, as he pulled the great slugger from first base for a pinch-runner. In the moment, it seemed to me that he should hedge his bet and allow for the possibility Schwarber would hit again. He didn’t do that. Instead, he pulled the hefty lefty for a replacement, the 22-year-old rookie Almora—an unlikely representative on the playoff roster in his own right.

Kris Bryant followed Schwarber, getting behind 1-2 before lofting a fly ball that Pat Hughes called with his familiar vocal build suggesting the possibility of a transcendent home run. One could be forgiven for rising from their seat and watching the ball sail towards the center field fence, imagining the glory it could bestow upon a city. It was the likely MVP of the league—he of crystalline eyes and boyish beauty—blasting an extra-inning, tie-breaking home run in Game 7 of the World Series. Every Cubs fans’ deepest fantasy was about to come to fruition.

But that is not what happened. Baseball has a habit of creating a beautiful narrative, only to rip it away and give you side-eye for naively thinking you might have known the story line. Such is the mysterious nature of the game. Instead of leaving the yard, the forces of physics demanded the ball drop a few feet short of the barrier, coming to rest in Rajai Davis’ waiting mitt. 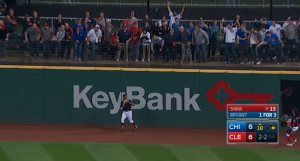 Millions of Cubs fans deflated at once, acutely aware that Bryant had not just rescued the team from colossal collapse. The Fox broadcast chose to pan to Bryant’s disappointed reaction, rather than continue to follow the ball. You could easily forgive them for the shoddy camera work, the world was thinking about homers and glory, not instincts and hustle.

All but one of us, that is. Albert Almora Jr.—dubbed my Captain of the next wave—read the ball off Bryant’s bat for precisely what it was, a long out. Rather than running to a few feet from second in an attempt to score should the ball carom off the wall for the double, he sprinted back to first, recognizing the light tower power of his teammate Bryant meant there were only two likely outcomes based on the trajectory of the ball: the first being a home run, the second being an out.

Almora burst from first base the moment the ball touched Davis’ mitt, deciding of his own instinctual accord that flight was worth the risk. It should be noted that in the fourth inning, Bryant had challenged Davis’ arm and scored on a shallow fly ball off the bat of Addison Russell. This was surely not lost on the precocious Almora. The throw from Davis came in exactly as Almora might have imagined, weak and off line as he slid in safely into second base. 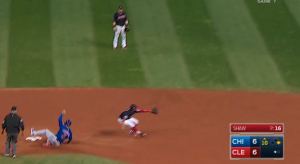 Almora would of course eventually score the go-ahead run, but it’s the series of moves it made Cleveland manager Terry Francona make that ended up being the difference in the game. Francona elected to walk Anthony Rizzo—a suspect move in its own right—to instead face Ben Zobrist and set up the double-play possibility that Almora had just erased. After Zobrist’s memorable double gave the Cubs the lead, Rizzo would go on to score the game-winning run on Miguel Montero’s single. Had Almora not taken second, there is a better than 60 percent chance Rizzo would have never been on base to score that sacred run. This is precisely why Bryant’s fly ball only ended up reducing the Cubs’ chances of winning by about three percent, rather than lowering them by a more significant margin.

Way back during that interview in April, I asked Almora if his natural defensive instincts could ever translate to the basepaths. His words haven’t stopped ringing through my head since the ball landed in Davis’ mitt.

“Again, baserunning for me this year has just been confidence. Just pick a good situation, and go. Before I used to think a lot… I think there was 20 times, at the beginning of my career, when I would take off on my first step and then shut it down. It was just a thing, and in my head I was like “Oh, I didn’t get a good jump,” and you know it was just a confidence thing… I just had to go.

3 comments on “The Captain’s Instincts Come Through”

Entirely right to highlight Almora’s nice play, but overall the flyout decreased the Cubs win expectancy (it’s an equivalent outcome to a sacrifice bunt). I think you may be reading the WE graph upside down?

Thanks – you’re right, I’ve amended to properly reflect the situation.

There’s a great piece on this same play over at fangraphs too. http://www.fangraphs.com/blogs/the-moment-before-the-moment/