When Javy Baez exploded into the national consciousness in the 2016 MLB playoffs, many Cubs fans chuckled. We had blissfully marinated in Baez’s sensational defensive play for the better parts of 2014, 2015, and 2016.

My favorite play? When Baez deked the Dodgers’ baserunners by letting the soft liner drop in front of him for a double play:

Instead of being a marvel of athleticism, it was a marvel of awareness. As my wife said after the wink Baez gave to the camera that followed: “I am now pregnant.”

It turned out that Baez’s play in the NLDS and NLCS was something of a supernova, an enormous yet unsustainable flash. And Baez’s offensive performance in World Series looked more like a black hole. Baez flailed at a lot of breaking pitches as the Indians pitchers mercilessly exposed his penchant for mistaking sliders for fastballs, like this:

Because the Cubs won, a lot of people have blissfully forgotten that overswinging is Baez’s biggest weakness as a player, as demonstrated by Baez’s struggles in the World Series. Now, with Spring Training just a month away, some folks in the local and national media are calling for Javy to take over second base from Ben Zobrist on a full-time basis, or to be traded to the Dodgers.

Either of those moves, my friends, would be a mistake.

Baez, not Zobrist, Should Be the Cubs’ Super-Utility Player

Comparing Baez and Zobrist is fun because at first, in some ways, they look like very similar players, then when you open up the kimono with more efficient stats you see they are dramatically different.

Their raw numbers from 2016 appear somewhat comparable given Zobrist had 100 more ABs than Baez:

These numbers suggest that Baez is essentially an average to below-average offensive player, while Zobrist is perhaps one of the top-30 offensive players in baseball. Zobrist is perhaps the perfect juxaposition vis a vis Baez: his is value derived in large part due to his pitch selection and making tons of contact, while Baez swings at 42.9% of pitches thrown outside of the strike zone and misses a lot of them. The Cubs simply cannot take Zobrist’s bat out of the lineup.

On the flip side of the diamond, Baez is one of the best infield defenders in baseball at all three “hard” infield positions, while Zobrist emerged as a liability in 2016 at second base as well as in the outfield. Overall, Baez accumulated fielding runs above average (FRAA) of 3.8 in 2016, while Zobrist was a net negative at -9.4. Using UZR/150 from Fangraphs, we can break down how effective each of Zobrist and Baez were at the various positions they played in 2016, normalized for an average number of chances over the course of a season: 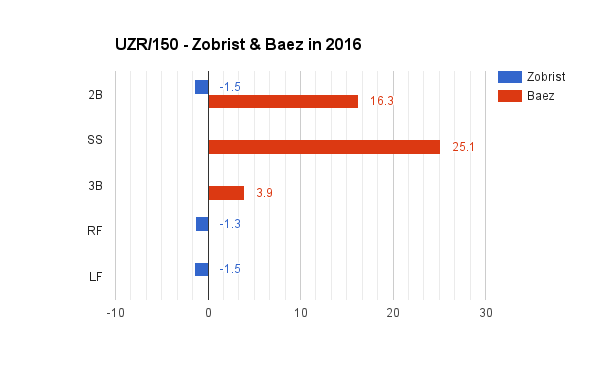 Incredibly, Baez played three infield positions (2B, SS, and 3B) at or very near-Gold Glove level (again based on Fangraph’s UZR/150): 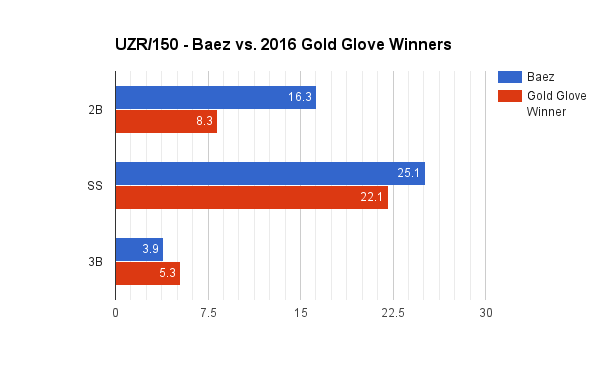 Now I ask you: Between Baez and Zobrist, which player would you pick for a utility role in which he plays a different defensive position every day? Clearly, it’s Baez.

This does not mean we have to reduce Javy’s playing time: I want him in the field every inning of every game for his defensive wizardry, which saves the Cubs’ pitchers many runs, and gave us fans many gasps of joy, in 2016.

So how do we get Baez’s glove in the field, and, as a by-product, his bat in the lineup?

The big difference this year? Bam Bam is back.

That’s right: Joe Maddon and the rest of Cubs Nation want Kyle Schwarber in the batter order, and he will do the least defensive damage in left field (his aspirations behind the plate notwithstanding). This significantly limits the flexibility Maddon enjoyed in 2016 to get Baez into the lineup.

So let’s figure out how we get there. First, here are four assumptions I used in this analysis:

Maddon has expressed his desire to give his players numerous rest days throughout the season, and his track record in 2016 showed that he follows through on this desire with both position players and starting pitchers. With the Cubs making a long postseason run in 2016 and expecting another long run in 2017, I expect Maddon to continue giving guys rest days throughout the season.

Here’s how four Cubs’ player’s rest days will get Baez in the lineup:

Assuming all that happens, the Cubs can get Baez in the lineup four days a week as a starter. At 4.012 PAs in each of those starts, Baez is up to 433 PAs. That’s close, but not all the way to 500 PAs.

To get the rest of the way, we need to factor in the PAs Baez will accumulate as a defensive replacement, which I assume happens twice a week, adding an additional 56 PAs (assuming 1.046 PAs per game).

I’ll admit to a couple reaches in the rest days above, in particular with respect to Russell and Bryant. Fine. If those two get a day off every other week, instead of every week, and Baez comes in as a defensive replacement on those non-rest days, Baez would lose only 50 PAs, dropping down to 441 PAs for the season.

In the end, Baez is a phenomenal defender who the Cubs should want in the field as much as possible. Hopefully his bat catches up even partially with his defense—he certainly has all the physical tools. Thanks to the front office assembling a roster full of versatile players and Maddon’s creativity, Cub fans got to watch Baez pretty much every day in 2016.

Based on the analysis above, there’s every reason to believe that will continue in 2017.

Tags: 2017, Javier Baez, Utility Role |
Dan Hodgman
Follow @@daniel_hodgman
I live in Lincoln Park with my wife, who thinks I am crazy because I can sit and watch every pitch of the Cubs season without going insane, and my 160-lb mastiff, who just wants to sleep, eat, and poop. I write about baseball in the hopes of one day changing both of their perspectives.
read more from Dan Hodgman

And that assumes complete health for all players. There will be at least some 15-day DL stints, which will give Baez more playing time regardless of who is on the DL because of how guys move around. Also, if Schwarber catches, Zobrist in LF, Baez at 2B for like 10 starts. Also, Heyward in CF for a few games with Zobrist in RF, Baez at 2B.

Totally agree re DL stints and other lineup permutations you’ve identified above.

Everything right on, Dan, but one glaring part of the analysis is missing: the debate in Joe’s mind may be framed “Javy or Zobrist”, but that is a huge mistake if he sees it that way. The prob in all this is the completely head-scratching pickup of Jon Jay–let alone for $8 MM (starter money).

Every single inning that Jay plays this year will be a theft from–you name it–Almora obviously, but also one of either Baez, Zo, Schwarbs, even Contreras.

Assuming no Jay, it could have been assumed that Almora, not Baez, would be given a shot, but if he struggled or a tough RHP was facing us, Heyward could slide over to CF–where he’d be doubly valuable, covering up for shortcomings in LF and RF–as opposed to none in CF. In that way, even counting 40 times when Heyward plays CF adds to your Baez analysis; each game in CF equals another in RF for Zobrist or Bryant, and additional games at 2B and 3B for Javy.

I hope to God someone who can impact Joe (only Joe) has figured this out.