There weren’t many things that the Cubs needed to address this offseason: figure out how to replace Dexter Fowler in center field and at leadoff, sort out the back end of the bullpen, pick a fifth starter, find playing time for a surfeit of position players, and shore up pitching depth. A relatively short list, and all relatively modest goals. While the front office struck with vigor with the first four—they shipped off Jorge Soler for Wade Davis, signed Jon Jay, and tabbed Mike Montgomery for the rotation all quite early in the offseason—they’ve approached their starting pitching depth with a more lackadaisical flair, nonchalantly picking up a few failing starters in a short period of time in hopes of rehabbing them.

Brett Anderson signed for a year, coming off another disappointing, injury-riddled season with the Dodgers. They traded for Alec Mills, sending their second-round pick from 2015, Donnie Dewees, to Kansas City. Following his designation for assignment by Colorado, former top prospect Eddie Butler found his way to the Midwest, passing James Farris and an international signing slot going the other way. And, after a quick Google search, I guess the Cubs also signed guys named Casey Kelly and Seth Frankoff. The latter is a 28-year-old who has never reached the majors and has no picture on his Baseball Reference page.

As Nate Greabe noted about a month ago, this plan of attack—throwing high-risk pitching to the wall and seeing what sticks at the major-league level—isn’t out of line with Theo Epstein and the Cubs’ modus operandi when it comes to pitching. They draft scores of pitchers after the first few rounds, with the rate of pitching prospect attrition deeply ingrained in their minds, and they rarely sign free agent relievers.

Rifling through other teams’ rotation detritus is no guarantee of “depth” in the traditional sense, though, and I’m here to tell you that I don’t believe the Cubs have good rotation depth and that spots six through eight on their starter depth chart are downright bleak.

Eddie Butler is the poster child for this offseason gambit. Cast aside quickly by the Rockies after only 159 ⅓ major-league innings, Butler managed to lose all of the trust that a pitcher might earn after being considered a consensus top-30 prospect. The statline doesn’t lie in this case: Butler has a career 6.50 ERA, and DRA hates him to the tune of a career 6.03 mark. In other words, in less than a full season’s worth of pitching, Butler has been worth an astounding -1.7 WARP, and hitters have roughed him up for a .318 TAv.

But we shouldn’t scout the statline, as much as it threatens to shove the red flags right down your throat. Larry Scott recently exhibited some optimism regarding Butler, due to the pitcher’s similar repertoire to one Jake Arrieta and pitching coach Chris Bosio’s success in helping him, but a similar repertoire does not a similar pitcher make. Butler is changeup-reliant; Arrieta rarely throws changeups. Mechanically, Arrieta is a Rube Goldberg machine, with all the parts needing to be perfectly in line for his crossfire action to be successful. Butler is much less refined and appears to have less control over his core, resulting in a high variety of release point variations: 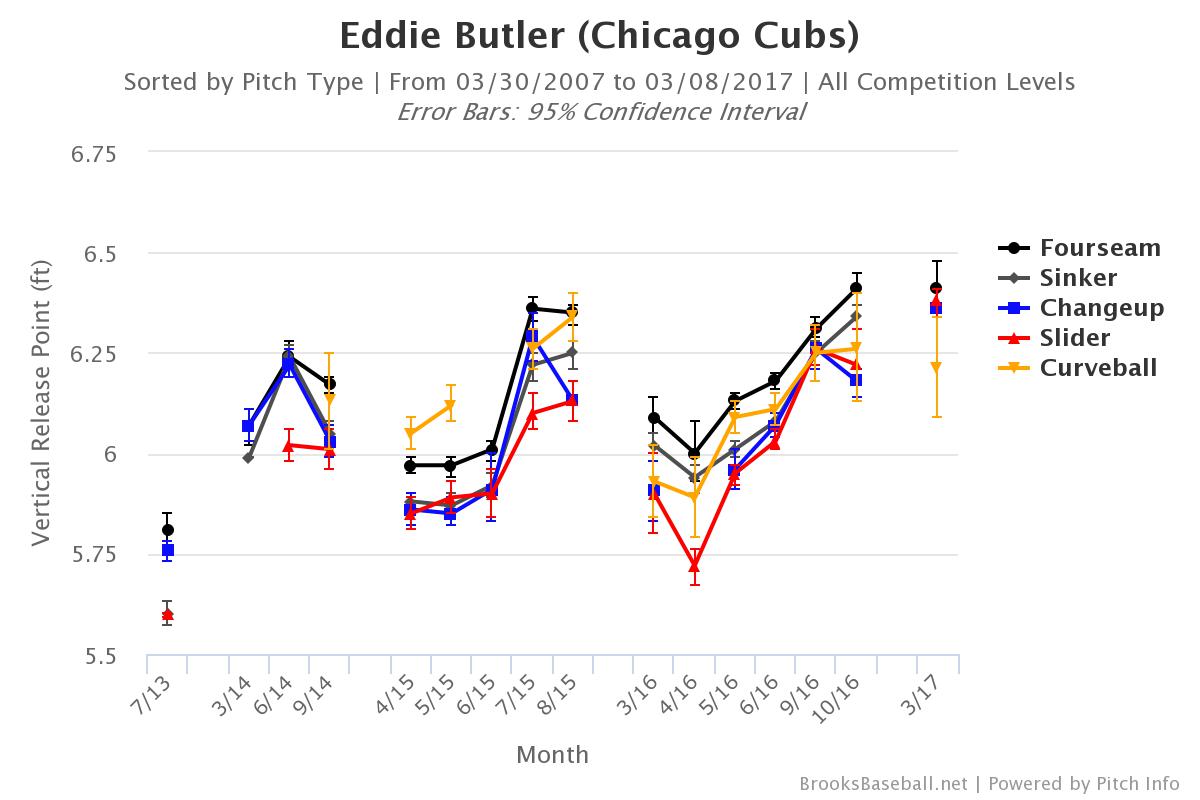 It’ll take a lot of work for Bosio to make Butler right, and with Butler guaranteed to start at Triple-A Iowa, it’s unlikely that the pair will have more than just this spring to work together. If Butler makes it to Wrigley, it’ll be tough to replicate his disastrous numbers with Colorado (he’s away from Coors Field now, after all), but it’s an extreme long shot that he’ll even be capable of facing major-league hitters. Maybe as a fastball-changeup reliever Butler could find success.

With Mills, the statline belies the righty’s problems. Mills has put up consistently good numbers in the minors, a career 3.03 minor league ERA with very few walks to his name. He’s a fine pitcher, if not a great prospect, and, at 25, still has age on his side. PECOTA’s 50 percent projection pegs him right around an ERA of 4.00, but that’s in very limited playing time. He’s Kyle Hendricks-lite, with a full slate of pitches headlined by his changeup, but Hendricks’s success story is difficult to reproduce. Of the pitchers the Cubs acquired, Mills is the most likely to fill in and be just fine.

The pitcher with the highest upside is Brett Anderson, although Anderson staying healthy enough to snag some starts in lieu of Mike Montgomery is a slim possibility. Aside from a solid 2015 in Los Angeles and some flashes of groundball-heavy brilliance in injury-shortened campaigns, Anderson leaves quite a lot to be desired as rotation depth. After all, if your depth is injured, it’s no depth at all.

The remaining candidates to fill in if Montgomery fails or gets injured are hardly worth noting, and so we’ve reached our grim end in this journey through the Cubs’ starting rotation depth. I would be exceedingly glad to eat my hat if I’m proven wrong; I wager that none of these pitchers will provide the Cubs with meaningful contributions in 2017, however, and the parade of Donn Roach/Dallas Beeler types (now taking the form of a being called “Jake Buchanan”) will continue.

Good god those release points…just all over the place.

I’m in total agreement. I’m half expecting the wheels to fall of Lackey’s walker and Jake to reprise his inconsistent 2nd half of last year for Maddon to stretch out Carl Jr. or to initiate some whacky new pitching rotation where our bull pen ends up becoming psuedo starters 2/5ths of the time.

I’d hate to give up Eloy and Ian but if all implodes, I could even see Schwarbs on the market in an emergency. Let’s hope it doesn’t come to that..

whoa whoa whoa, buddy. that’s a really big ledge you’re out on there, and i’m here to talk you off of it.

We’ve got three guys who have been voted in the Cy Young discussion 3 or higher in the last two years. We’ve got a veteran #4 with stability, a solid #5 with promise, an innings-eater in Zastryzny, a defense that makes any pitcher look better than he is and a handfulof unusable-but-still-valuable prospects to deal in case of emergency. Think less Jiminez and more Candelario. Less Happ and more Zagunis. (Yes, that’s a lower tier of return. that’s the point. We don’t need Chris Sale here.) This article makes things seem more dire by pointing out that Theo’s low cost high risk plays have risk (duh-doy, Britta!). The point of insurance is pooling risk. While it’s individually likely that any of these worst case scenarios play out, it’s collectively very unlikely that *all* of these worst case scenarios play out.

Now come on, the nice firemen have a warm blanket and a hot cup of cocoa if you promise to come down.