It is a dubious task to console the fans of a team that is sitting just a game above .500. Granted, being at 20-19 in the NL Central is not the worst position for the Cubs, as they are only 2.5 games behind the first place St. Louis Cardinals. Also, it is the middle of May and there are 124 games left in the season. It is far too early to panic.

But when your team is the defending World Series champ, it is not out of line to have high expectations the following season. And when your team is hitting .241/.331/.403, it is difficult to find a bright spot on the season. Yes, even the subject of this article is struggling at the plate after showing promise following his debut last year. However, I implore you to look at Willson Contreras’ improvements as a catcher. Bright spots, people, that’s what we’re looking for!

Three months after his first appearance at Wrigley Field, Cat Garcia wrote about how Contreras measured up against David Ross and Miguel Montero behind the dish. She concluded that although Contreras did not rate as high defensively behind two great defensive backstops, he held his own in just three months of work. The one thing that Contreras needed most was more time donning the tools of ignorance.

And here was the data at the end of last season.

Again, Contreras fell behind Montero in called strikes above average. However, he improved as the season went on and he finished on par with Ross. In fact, among catchers with at least 1,000 framing chances, Contreras ranked as the tenth best catcher in the league. Equally impressive, the then 24-year-old widened the gap between himself and Montero in allowing errant pitches (EPAA), allowing runners to steal (SRAA), and throwing runners out when they attempted to steal (TRAA).

This season, Contreras as seen 1,864 framing chances – roughly the same amount of chances back in September. Here is what his defense looks like so far.

Keep in mind that last season Contreras continued to improve with more time behind the dish. That seems to be the case this season considering the improvement in his pitch framing. In just over a month and a half into the season, Contreras’ pitch-framing has improved by 0.5 percent. At the end of the 2016 season, Contreras’ framing was worth 4.3 runs. So far this year, his framing is worth 3.6 runs, over one-third of a win! AHHHH! The Bright Spot!

In his player profile at the end of the year, Nate Greabe noted that catchers normally do not improve in this skill once they enter the league. Yet, Contreras is doing it. But how?

Here is his called-strike heatmap from 2016. 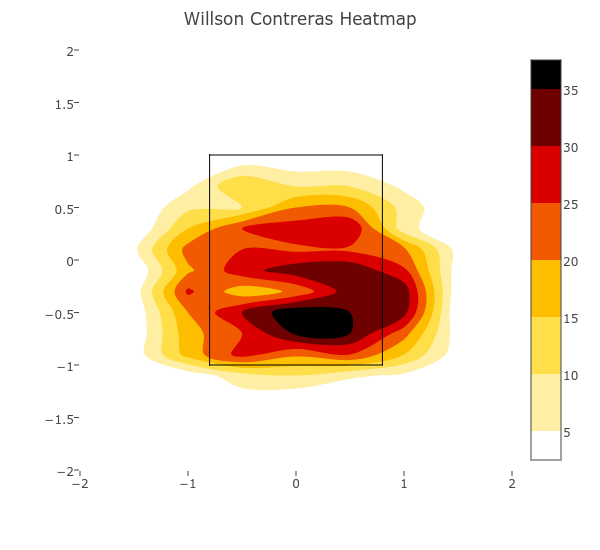 And here is his heatmap for this season. 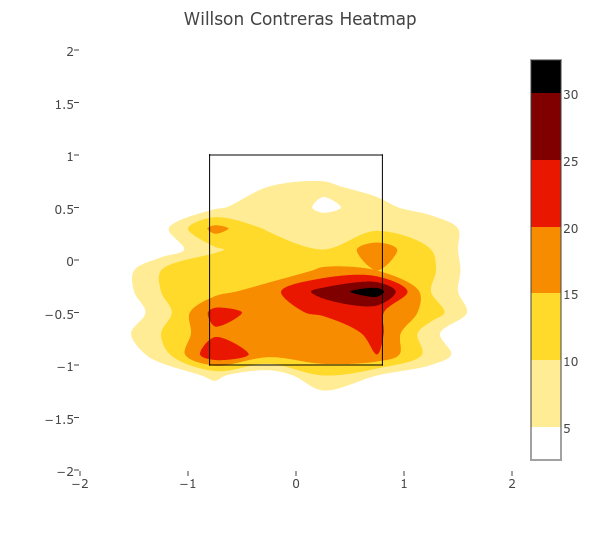 It seems as though our beloved backstop is widening the strike zone with his framing. Using heat maps from Baseball Savant, we can see that he is presenting would-be balls as strikes further off the plate.

As stated, Contreras is struggling at the plate. In 120 plate appearances, he is slashing .236/.300/.409. With Montero hitting better than his younger teammate—albeit in fewer plate appearances—it is tempting to give the veteran more playing time. But that comes at the cost of Contreras’ time behind the dish.

Fortunately, the gap between the 15-game rolling average on his hard-hit rate and his soft-hit rate is starting to widen, indicating that he is starting to make solid contact with the ball again. It’s now a matter of time before he returns to form in his plate appearances.

It is imperative that the Cubs weather Contreras’ offensive slump and continue to give him as much time in the lineup as possible, not just so that his offense can improve but so that his development as a catcher can improve as well.

Xavier Alatorre
Follow @xavieralatorre
Xavier was a contributor at BP Milwaukee during the 2015 season. He currently writes here and at the Sports Quotient. When he is not writing about baseball, he is busy working on his first novel. In his spare time, he is stuck in traffic.
read more from Xavier Alatorre

I love learning and reading about these new catcher framing metrics. The problem I have is that when we are looking at numbers like EPAA that are .000, not only does it seem meaningless, it is difficult to quantify or put into context. It’s just not very user- or fan-friendly so far.

When the framing numbers were first introduced in January 2016, there were a few articles on the main site that provided some of the context you might be looking for.