Year in Review: Mike Montgomery. Starter? Reliever? Nobody knows. All he did in 2017 was further confuse us on this question, posting some perplexing splits between his time in the rotation and his time in the bullpen.

The first thing I noticed about Montgomery’s success as a starter this year was the improved use of his fastball. In 2015 and 2016, Montgomery allowed batting averages of .291 and .275 on his fastball when he was starting , according to Baseball Savant. This year, he allowed a .248 BA on his fastball. This clearly had something to do with quality of contact too, as this year he allowed an 86.0 MPH Exit Velocity, compared to 91.3 MPH last year. And it probably was because of a clear change in pitch location. Here are pitch heat maps on his FB as a starting pitcher the past two years, 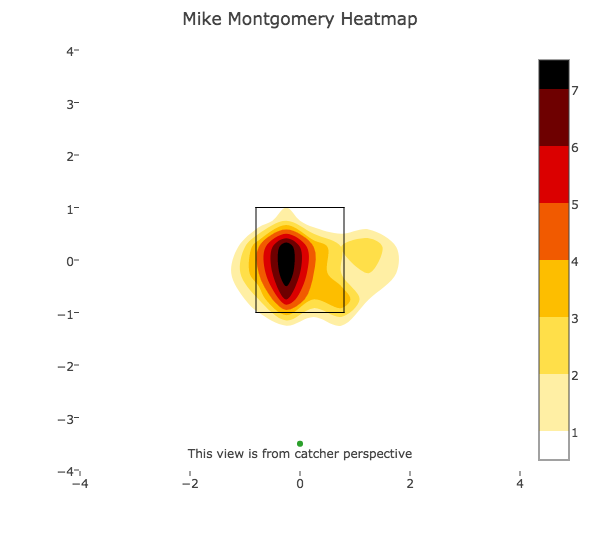 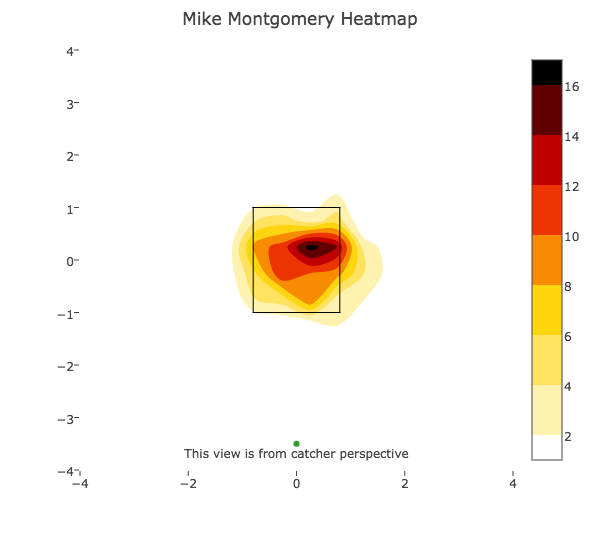 Looking Ahead: PECOTA’s pre-2017 projection seems to think Montgomery will rebound somewhat. Projecting for 26 starts and 156 IP next year, it sees his K/9 climbing back up to a better mark of 8.9. The main problem I noticed though had to do with the batted ball profile. Looking at this year, Montgomery seemed lucky in the BABIP department. His .253 BABIP this year wasn’t ridiculously far off his career .269 mark, but it becomes more concerning when you realize the change in quality of contact he allowed (25.5 percent Hard Hit% in 2016, 30.2 percent in 2017), as I mentioned above.

Currently pinned as the #4 starter for next year’s Cubs team, Montgomery hopes to sustain his recent success as a starter. And for a guy that has been stuck in the middle between relieving and starting, a defined role heading into 2018 should be reassuring. If he can work that FB/CB combo well, the Cubs might have themselves a serviceable #3. If not, it’ll probably be more role bouncing for Montgomery.

Tags: 2017, Chicago Cubs, Mike Montgomery, Player Profile |
Patrick Brennan
Follow @paintingcorner
Patrick is a huge baseball fan, especially the analytical part. He resides in Kansas City, where he inserts his passion (unwisely) into his fandom of the Royals and Chiefs.
read more from Patrick Brennan

Patrick,
How can you say that Montgomery is pinned as the number 4 starter and that it’ll be reassuring for him to have a more defined role in 2018. Epstein has clearly stated they will keep Montogomery in the swing man role and as a valuable bullpen and rotation depth piece, not as a full time starter.