While the Cubs had a pretty smooth spring training, just the way they wanted it, there was little talk of the new coaches the Cubs hired. It seemed just a touch strange for a team that had won the division two years in a row, and gone to the NLCS three years in a row, and had won 292 games the previous three seasons, to do a full coach-flushing. We mostly dismissed it as just time for new voices, as Chris Bosio had been entrenched as the Cubs pitching coach for a long while. I’m still not sure a hitting coach really does all that much, so the insertion of Chili Davis hardly moved the needle.

And it would be extremely unfair to judge any of these coaches barely three weeks in and with less than 10 percent of the schedule played, thanks to weather. But I’m going to do it anyway with new pitching coach Jim Hickey, and go ahead and call me a jerk.

We’ve only had three trips through the rotation, which is not long enough to define anything as a trend, but here’s something for you to nibble on. Here are the walk-rates per nine innings of each starter from last year to this one:

Seeing as how Bosio was thrown overboard partly because last year’s bullpen needed the Waze app to find the plate, this is kind of a jarring start. Let’s see if we can figure out why. Has there been a change in repertoire from the starters?

A little. Lester is throwing way more four-seam fastballs than he did last year, a jump of 38.9% to 47.7% this year (according to BrooksBaseball.net). It’s come at the expense of his cutter, which has dropped its percentage of usage the same amount that the four-seam has gone up. But when he does throw is cutter, it’s gone from being a strike 28% of the time to just 17%.

The change for Hendricks is throwing his sinker even more, as he doesn’t throw a four-seam really. He’s using it 10% more than he did last year so far, with his change and four-seamer taking on the loss. There really hasn’t been any change in how often his sinker is thrown for a strike, but obviously throwing more of them means more of both balls and strikes. So this one’s hard to figure.

For Quintana, there’s a huge jump in the use of his four-seam fastball. Last year he threw it only 35% of the time, mixing in a sinker as well. This year, he’s throwing the four-seamer 53% of the time, while seeing his sinker-percentage drop 13%. The problem is he’s not locating either as well, with a drop of 5% in his strike percentage for his four-seam and an even steeper one with the sinkers he is throwing.

Darvish is harder to judge because he throws just about everything, but there’s also a spike in his four-seam count as well as his slider count, though you could confuse the two of those considering the movement he gets on every offering. And again, he’s having way more trouble, like the first three, throwing his four-seam fastball for strikes, seeing a 7% drop from last year.

Chatwood has been the only pitcher to not show a huge difference in arsenal from last year to this one, with only a small increase in the number of four-seam fastballs he throws. But walks were a problem for him to begin with, so maybe he just has to work the other way.

So clearly a change in approach. How’s that working out even deeper? Well, there seems to be a change in what Jon Lester is throwing to righties with that four-seamer he’s using more often. Here is his zone profile to righties last year with just that fastball: 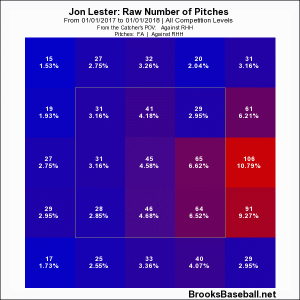 Almost exclusively to the outside corner. Here’s this year’s: 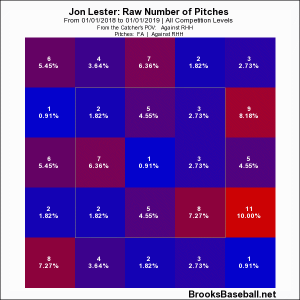 It’s all over (and again, an early sample). But yet it’s lefties against whom Lester’s walk-rate is twice as high as it is against righties, though we’re talking about seven walks total so far this season, so maybe it’s not worth worrying about. 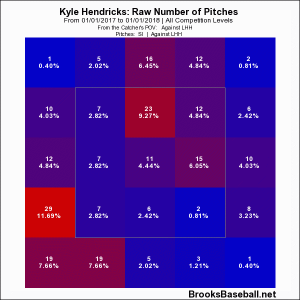 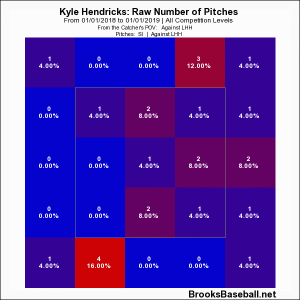 Hmm… beginning to see a pattern here. Let’s move to Quintana and righties.

Mostly burying his fastball inside on them. Now this year: 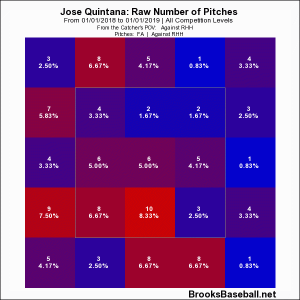 Maybe not as pronounced as the first two, but clearly not as exclusively to his glove-side or inside to righties as he was last year. Finally, let’s look at Darvish and lefties, and this time the slider he’s throwing way more often. This was last year: 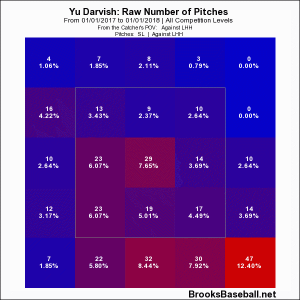 Basically diving it at their ankles. Now this year: 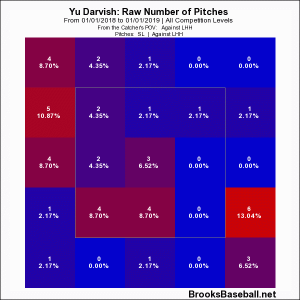 Now look, this is just three starts for everyone, and only two for Chatwood. So this could just be a contagious case of lack of control for everyone. But so far, I can safely say that Hickey wants everyone throwing their fastballs a bit more, and he wants them working both sides of the plate a little more often. At least, that seems to be the plan. And the pitchers are struggling with it a bit.

We’ll come back to this in a month or two and see if this was just noise or not.