What You Need to Know: Jose Quintana took the hill in Great American Ball Park, trying to build on his recent stretch of success. And in the early going, that’s what he did. Apart from a Billy Hamilton line drive in the second, which scored Curt Casali, Quintana was looking sharp through four frames, racking up first-pitch strike after first-pitch strike (more on this later), staying ahead of hitters, and limiting the damage through well-placed pitches on the corners.

Meanwhile, in the fourth, the Cubs engineered three runs. Ben Zobrist reached on a grounder down the right field line, was advanced to second with an Anthony Rizzo grounder, and was driven in when Javy Baez laid down a beautiful bunt while the infield was playing back. Better yet, Javy ran hard down the first base line and was called safe, extending the inning. It’s become almost a cliche to say that Javy Baez does something exciting every single game, but this was a smart, unexpected, difference-making play, and one that only Javy could have pulled off.

Following the bunt, Kyle Schwarber stepped up and, yet again, blasted a first-pitch fastball into the seats. With the Cubs up 3-1, it was up to Jose Quintana to hold the lead.

Which he did, for one more inning. In the bottom of the fifth, though, Jose Peraza extended his now 22-game on-base streak with a bullet to center, then promptly stole second. Joey Votto ripped a liner to center on the first pitch, and Eugenio Suarez gave the Reds a 4-3 lead with a deep homer to center.

The Reds piled on a couple of insurance runs seventh and eighth innings, the Cubs never threatened again, and they’ve now lost the first two in the series with the last-place Reds.

Next Level: Sometimes the irony involved in baseball is just too much to take. In this game, Jose Quintana had some of his best control of the season. In the past, generating strikes on the first pitches of at-bats has been a formula that has worked for Quintana. Check out how he’s ranked in first-pitch strikes over the past several seasons:

One key to Quintana’s consistency in the past, it would seem, has been to get that strike on the first pitch, something he’s struggled to do this season. Until tonight: 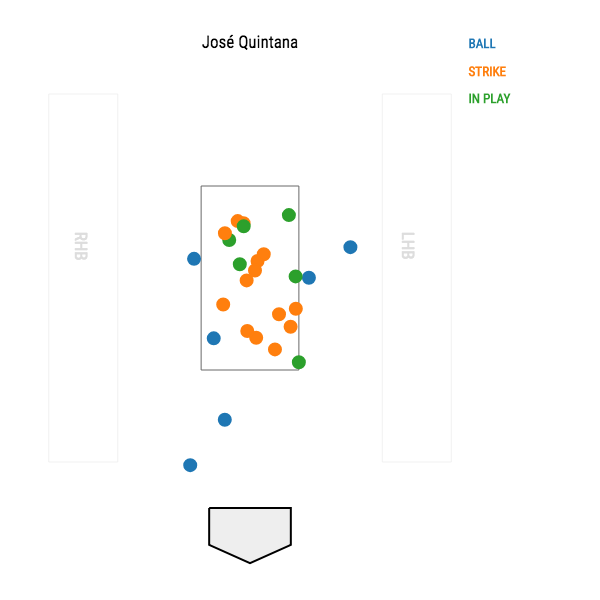 Despite his immaculate control in this game, despite rediscovering the control that led to such consistency in the past, Quintana still served up four earned runs over five innings. Just brutal.

A few other takeaways from the game:

Top WPA Play: Kyle Schwarber’s two-run bomb to center (and in his hometown, no less!), which temporarily gave the Cubs the lead. (+0.227)

Up Next: After taking back-to-back losses on Kyle Hendricks and Jose Quintana starts, the Cubs hope to salvage the series when they send Luke Farrell to the mound to face Anthony DeSclafani.