It’s at the mountaintop that you have to prepare for the biggest fall, right? Something like that. So being named to the All-Star game seems an excellent time to address all of our Jon Lester fears. Or maybe there’s just another reason I was voted in high school “Most Likely To Take Lemons And Make Vinegar.” Anywho…

The Wallenda act Lester has been pulling all season is known to most by now with even a cursory knowledge of underlying numbers. Though the ERA is sparkling and the win-loss record even more so, the winds are beginning to howl, if they haven’t been howling for a while. Lester is basically striking no one out, with a 6.86 K/9. His BB/9 of 3.22 is higher than it’s been in six seasons. He’s not getting many grounders, with a ground-ball rate below 40%, a drop of 7% from last year when he wasn’t even all that effective for most of the season. He has an extraordinarily high left-on-base percentage of 83.8%, though that’s in line with what he did in ’16 as well. He’s giving up the highest line-drive rate of his career (though only a point or two higher than in the past) and his career-high hard-contact rate (which is a good four points higher than it’s ever been). Essentially, Jon has seen the Cubs defense pull his ass out of a sling more than anyone really should be comfortable with, even as good as the Cubs defense is.

The urge here is to point to Kyle Hendricks’s 2016 as proof that you don’t need to strike everyone out to be effective, especially when you have the league’s best defense behind you. And the Cubs have that again. But that doesn’t hold as much water, as you’d like to avoid having to use a towel. Hendricks struck out over eight hitters per nine, where Lester isn’t even at seven. Hendricks got half his contact on the ground. Lester isn’t even at 40%. Hendricks gave up only about 25% hard-contact of balls put in play. Lester is over 33%. Hendricks hardly walked anyone at all. While Hendricks may live on the margins and have a small margin for error, he was just walking over water. Lester’s wire is over a pool of sharks and crocodiles and jellyfish.

So, what could we be in for? There are a few indicators. Lester’s 4.26 FIP ranks him 48th among qualified starters. His 1.9 WARP is 32nd amongst starters. So that gives you some idea. But we can do better.

Of the top 30 starters this year in terms of fWAR, only Miles Mikolas (Gordon Wittenmeyer’s new object of affection) and Dallas Keuchel have K/9s as low as Lester, and both are getting over 50 percent ground-ball rates to compensate. Mikolas at least has the same hard-contact rate, but Keuchel has a much lower one.

Going back the previous five seasons, only nine of the top-30 in each of those seasons had K/9’s below 7.00. They are:

None of them had a BB/9 over 3.00, as Lester currently does. All of them had a GB% of at least above 40%, which Lester currently does not. Most of them were pretty close to or above to 50%, which Lester can’t even see right now. Of those nine, only Fulmer, Leake, Chacin, and Kuroda maintained a hard-contact rate over 30%. So it can be done, it’s just really weird when it happens. But hey, baseball is weird.

That still doesn’t tell us what we could be in for in the second half. It could be this all season, of course. As of right now, BaseballSavant.com has Lester’s xwOBA (his wOBA against given what would normally happen with the contact and walks he’s giving up) at .354. The actual wOBA he’s giving up is .291. Take these for what you will, as they are still very neophyte in their development. That difference is fourth-highest in the league, alongside names like Michael Wacha, Sean Manea, and Dan Straily. That .354 xwOBA is 99th among qualified starters, behind such luminaries as James Shields and Matt Harvey. That sound you hear is your heart sinking into your pelvis.

Let’s keep going because I want to rob you of any sense of whimsy. I traveled down into the cave down the street from me, where my stats guru Craig lives (he doesn’t have Twitter but we’re working on it). Essentially, Craig created a study where we looked at the percentage of PAs against Lester that end in either a strikeout or soft-contact (K+paSOFT), essentially the best things that can happen for a pitcher before fielders get involved, and the percentage of PAs that ended in a walk or hard contact, the worst things before fielders (BB+paHARD).

In the first category, Lester ranked 79th out of 88 qualifying pitchers, between names Felix Hernandez and Danny Duffy, and that sensation you’re feeling is your last mean hurrying back up your esophagus for sweet release out the way it came in. In the BB+paHARD category, Lester ranked 49th, between Tyler Skaggs and Andrew Cashner. Again, that’s not going to keep your food where it was told to go.

Craig then lined the two numbers up to see who had the biggest difference between the two, and the numbers aren’t pretty. Here’s where Lester fits: 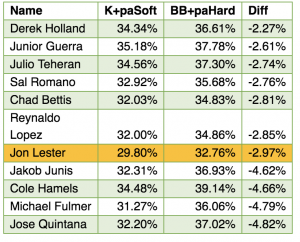 For comparison’s sake, here are some of the best pitchers in baseball in the terms of difference between K+paSOFT and BB+paHARD: 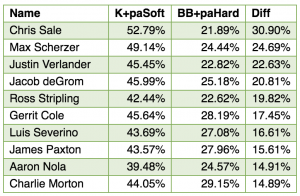 What’s clear is that Lester doesn’t have to start striking way more people out, though that wouldn’t hurt. But he does need to lessen the walks (which was trending down until his two July starts), and he needs to give up less hard contact, or he’s going to have to continue to will the defense behind him to be Danny Ocean’s grease man (there’s a reference for you).

Tags: Jon Lester, Regression |
Sam Fels
Follow @@CubsIvyDrip
One of God's own prototypes. Too weird to live. Too rare to die.
read more from Sam Fels

Very good if somewhat unsettling article. I do have to ask, “last mean” or last meal?
Thanks again for your analysis!