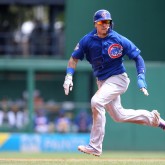 Javy Baez’s rookie season followed the pattern laid out by most Cub phemons. That is to say, it began with talk of Gary Sheffield and Miguel Cabrera but ended with Corey Patterson, Felix Pie, and Brooks Kieschnick. Back then, going through a list of Cub prospects was like reading Kevin Costner’s IMDB page. You could pick […]