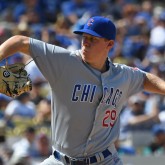 Rob Zastryzny, or ‘Rob Z’ as he’s called by Joe Maddon, made some Cubs history when he was called up to the big league club in mid-August. He’s the first of the pitchers drafted under the Theo Epstein regime to make it to the major leagues, and second only to left-hander Gerardo Concepcion when you […]