The Chicago Cubs won a handful of exciting games this week, beginning with a ninth inning comeback against the Rockies in Colorado on Sunday. Dexter Fowler took a two-strike offering from yes-he’s-still-pitching LaTroy Hawkins, and deposited it well over the right-field wall, turning the Cubs’ one-run deficit into a one-run lead that they would not relinquish in the bottom half of the inning. It was the kind of game the Cubs did not win in 2014—literally, they did not win any games in 2014 when trailing after eight innings—and it felt like an early turning point in the Cubs’ competitive efforts.

But I’m not going to talk about the top of the ninth.

Instead, there was a very interesting series of moments in the bottom of the ninth on Sunday, which didn’t, and won’t, get much discussion, given the Cubs’ dramatic win.

Let me set the scene: with two outs, against Cubs closer Hector Rondon, Charlie Blackmon doubled, representing the tying run at second base. Carlos Gonzalez came to the plate needing only a single to extend the game. Gonzalez, who bats lefty and is a pull hitter, has a career spray chart that looks like this: A near perfect candidate for the extreme shift, Gonzalez’s groundballs beg for three men on the right side of the infield, and a single infielder on the left, somewhere in the vicinity of the traditional shortstop spot. So, naturally, the Cubs obliged: 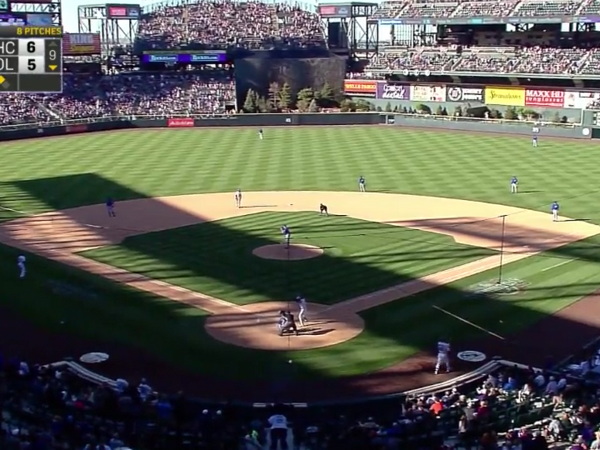 As you can see, the Cubs shaded Starlin Castro toward third base, rather than up the middle, despite Gonzalez’s spray chart nudging in favor of Castro playing up the middle. The placement is no doubt in part to guard against the increasingly popular bunt by lefties when they’re shifted against, but also to guard against giving Blackmon a free base at third.

… but the Cubs weren’t guarding closely enough against the latter, because Blackmon easily took third on the first pitch Gonzalez saw, reaching the bag almost simultaneously with Castro. With two outs, it was a bit of a risk for Blackmon, but, given the alignment, it was one worth taking. In the case of a wild pitch or a passed ball, Blackmon could now score. An infield dribbler? Score. A successful bunt? Score.

There are a number of factors that go into Castro’s placement in that situation, so it’s hard for me to say that he was in the wrong spot. With two outs, and a dangerous hitter like Gonzalez at the plate, it’s understandable that he would be everyone’s priority.

Now at third, Blackmon could take a lead commensurate with Castro’s defensive positioning, which was now just a touch closer to third: 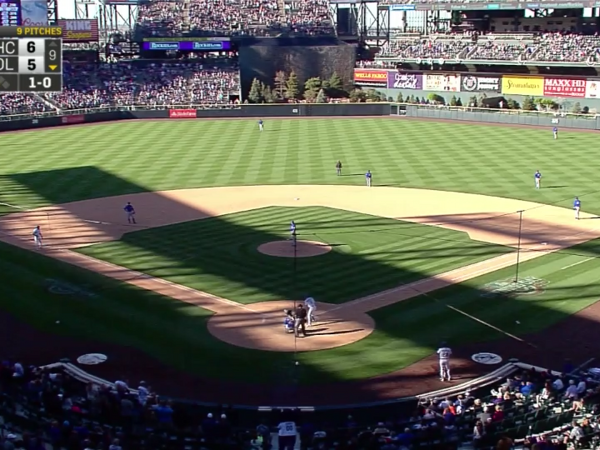 So, already you’re seeing the impact of Blackmon being able to take third base so easily. Now with that tying run at third base, the threat of a bunt by Gonzalez becomes all the more menacing. Were Blackmon not on third base, Castro would likely be shifted more up the middle, better aligning with the percentages on Gonzalez’s groundballs.

But, Hector Rondon being Hector Rondon, Gonzalez was quickly at two strikes. Presumably believing that the threat of a bunt no longer existed, Castro retreated—a lot—to a more typical shifted position: 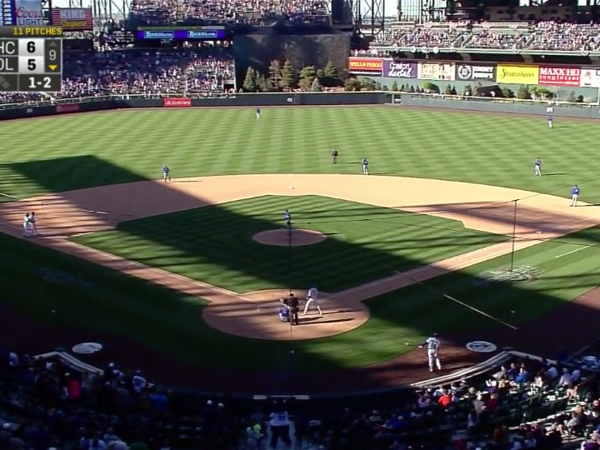 Can you guess the problem there? Yup, Blackmon took an outrageously huge lead. The threat of stealing home became a real possibility, and worse, it could have been a significant distraction for Rondon, who is trying to focus on Gonzalez, but now has Blackmon halfway down the line in his face.

Castro quickly returned to his previous spot, despite the two strikes, and Gonzalez subsequently popped out to shallow center.

Well, I’m not so sure I’ve got a concrete lesson beyond: this is interesting stuff in an age of extreme shifting, and the positions need to be carefully considered and understood in all game situations.

In hindsight, should Castro have been positioned closer to third so that Blackmon couldn’t take third base so easily? Since Castro had to move closer to third anyway once Blackmon had taken third, I think the answer is probably yes. Sure, it means you’re further away from the ideal position against Gonzalez, but, as we saw, that’s the likely end result anyway, and, in this case, at least you’ve kept the runner at second.

Extreme shifting is firmly planted in the baseball psyche at this point, but less certain is how teams best adjust their shift approaches with runners on base. It’s a trickier question, and it’s not limited to the unique, end-of-game situation we saw with the Cubs and Rockies.

Indeed, we saw Boston Red Sox youngster Mookie Betts take advantage of the extreme shift in a similar way this week, stealing second base … and then stealing third base on the same play:

The successful steal(s) by Betts were not solely the product of his speed and quick thinking, but also a product of the defensive positioning against David Ortiz, and the failure of the defenders to adjust on the fly to their shifted surroundings and baserunner who was suddenly on a new base.

Going forward, teams will have to work with their infielders to combat this kind of attentive baserunning, lest they give up free bases in scoring position.

1 comment on “Extreme Shifting and the Runner in Scoring Position”