Lost in the wealth of young Cubs talent like Kris Bryant, Jorge Soler, Javier Baez, and Arismendy Alcantara are some of the other players of their generation. Junior Lake typifies this crowd, which also included former Cubs Brett Jackson and Josh Vitters—players best left forgotten. What shouldn’t be readily forgotten is how hot Lake’s 2013 debut was—he hit safely in his first seven games, and had the third-most hits in his first seven games in baseball history:

Look at some of the names: Kirby Puckett! Willie McCovey! Riggs Stephenson! Unfortunately, Lake debuted about a month after Yasiel Puig made his meteoric start. The 2013 Cubs were difficult for even diehard fans to watch, let alone anyone who didn’t have to do it for a living, so Lake quickly disappeared from consciousness when his numbers fell back to merely normal. (Quick trivia note, the record for most games with a hit to begin a career belongs to Chuck Aleno, who had a hit in his first 14 games in 1941 for the Reds. He had 23 hits in that span—and 44 more in the rest of his career).

As 2014 began, there were high hopes for Lake, but he quickly displayed a propensity for swinging. Among players with at least 300 plate appearances, he was in the top 10 in swinging at pitches outside the strike zone, and the leader in whiff rate, not making contact on over 20 percent of the pitches he swung at. He stuck with the team for essentially the entire year, but began 2015 at Triple-A Iowa, unable to beat out players like Matt Szczur, Chris Denorfia, or Mike Baxter for the fourth outfield slot.

Lake returned to the Cubs at the end of April, and with the injury to Jorge Soler seems poised to gain more playing time. A funny thing happened to Lake—he appears to have become more patient at the plate. These side-by-side charts from Brooks Baseball show how Lake has changed in terms of whiff percent: 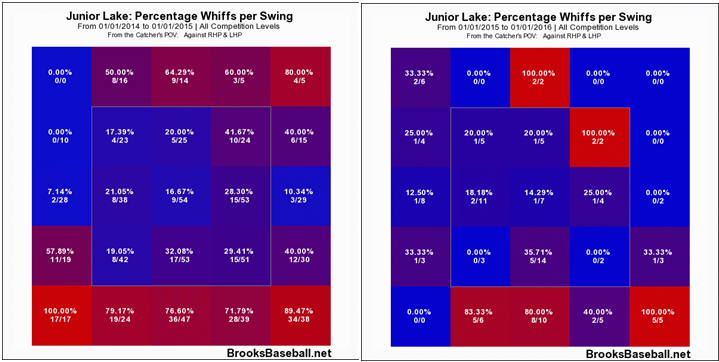 2014 is on the left, 2015 on the right, and the red squares show Lake’s danger zone for swinging and missing. The same spot low and away is his weakness, but he’s made marked strides in improving his plate coverage in just about every other area. The data can be reviewed in any way desired, but he’s reduced his whiff rate to 17 percent (still too high) and cut down on swinging on pitches outside the strike zone to 31 percent.

These charts from Baseball Savant show the location of the pitches that Lake swung at, also with 2014 on the left and 2015 on the right: 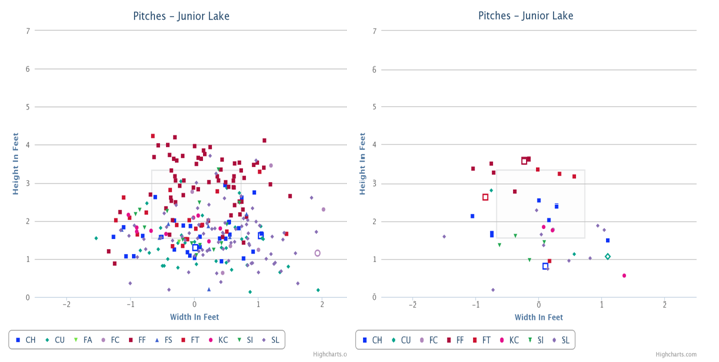 There’s a pronounced decrease in swinging at pitches wildly outside the strike zone. It hasn’t necessarily translated into success at the plate, since he’s hitting below .240 and still striking out about in around one-third of his plate appearances. Keeping that up will almost guarantee a return trip to Des Moines.

The real question is Lake’s long-term future with the Cubs. The wealth of young middle-infield talent seems to have Bryant tagged for left field, and that doesn’t even take into account Albert Almora, Dan Vogelbach, Billy McKinney, or wherever they end up playing Kyle Schwarber. Here are their numbers through Monday at all levels:

The most important column is age, because as a Cubs fan I’ve been hearing these names so long that I’ve begun to assume they’re just around the corner. They’re certainly making it difficult to keep them down on the farm.

Lake’s ultimate position has yet to be firmly established. With the wealth of talent, it’s safe to say it won’t be in left field, Dexter Fowler is a free agent after this year with no guarantee he’ll be back, and Jorge Soler seems to have right field sewn up, at least until he doesn’t. Lake can be a decent fourth outfielder, but doesn’t possess some of the characteristics desired in that position, such as speed or hitting left-handed. This is not to downplay his abilities, it’s just that with the embarrassment of riches the Cubs have throughout the organization, he might not be part of the plan going forward.

So what teams might be interested in Lake, and do these teams have something to offer? This table is derived from BP stats and lists the worst outfields this year as determined by cumulative BP Wins Above Replacement Player (BWARP):

Look at the team at the bottom, the one that plays a mere 12 miles south of Wrigley Field. Take a moment and drink this in—not to heap abuse on the Sox, but the outfielders they’ve run out have managed to collectively be below replacement level. But they do have a piece or two the Cubs might be interested in like Jeff Samardzija and David Robertson, but Lake won’t be enough to get that (or any other deal) done. He could be a piece of the puzzle.

How about the Phillies? Any outfield using Grady Sizemore and Jeff Francoeur with any frequency is firmly stuck in 2006 and due for an upgrade. They might have some decent outfielders in the minors, and Lake could be the bridge until those players are ready, and Cole Hamels is still owed over $90 million through 2019. The Rockies have exactly zero players that interest me at the major-league level, and the Twins probably won’t be interested unless they think they have a legitimate shot at remaining in contention (they still have nine games left against the White Sox).

And then there’s the Mets. While all the chatter seems to center around Starlin Castro for some pitching (I consider it borderline delusional to believe the Mets would settle for that), adding Junior Lake could make for a more interesting discussion. Juan Lagares will likely be their center fielder for years to come, but Curtis Granderson and Michael Cuddyer, at 34 and 36 respectively, make the Phillies outfield look positively young. Cuddyer is signed through 2016 ($12.5 million) and Granderson is owed $31 million through 2017, so there won’t be immediate openings, but Lake could fit there, and the Mets certainly have pitching to spare. Start mixing and matching some other players, and a real deal could occur—if both parties are interested.

Lake hasn’t shown definitively that he’s developed better plate discipline, but Soler’s injury provides him the opportunity to show if he’s made a legit improvement, as well as serve as an excellent showcase for other teams looking for outfield help. He’s made strides and just might have shown enough improvement to help the Cubs—maybe just probably not in the way he imagined.

Tags: Albert Almora, Billy McKinney, Chicago Cubs, Dan Vogelbach, Junior Lake, Kyle Schwarber, Starlin Castro |
Scott Lindholm
Follow @ScottLindholm
Scott is married with two great 20-something daughters, lives in Davenport, IA and has been a Cubs fan since 1970. He writes and is an editor at Beyond the Box Score.
read more from Scott Lindholm

1 comment on “A Look at the Past, Present, and Future of Junior Lake and the Cubs”

“Here are their numbers through Monday at all levels:”
I don’t agree, read that: http://www.fangraphs.com/blogs/nerd-game-scores-for-september-12-2016/