Three. It’s a magical number. It can refer to blind mice, Musketeers, the members of either Destiny’s Child or Hanson, or, perhaps most relevant to your short time on this earth, the whole number of innings Tsuyoshi Wada, starting pitcher for the Chicago Cubs, has managed to throw in each of his last two outings. To wit, his lines for his last two starts:

That’s not really what you want to see from a starting pitcher, even a fifth starter. Short outings by starting pitchers are problematic both on their own terms—they tax a team’s bullpen—and for what they imply, which is that the pitcher isn’t throwing effectively enough to remain in the game. And while Wada has long been noted for his pronounced times-through-the-order splits—hitters tend to do significantly better off of him the second and third times they see him than they do the first—three-inning starts simply aren’t acceptable moving forward.

Indeed, his overall performance this year—a 137 cFIP and a 5.66 DRA—leaves a great deal to be desired. Last year’s results weren’t sensational, either (106 and 4.32, respectively) but they were solid enough that the Cubs felt they got reasonable value for their $4 million investment and re-signed Wada this year hoping for more of the same. But it hasn’t been there. In his postgame press conference after Wada’s start on Thursday, manager Joe Maddon (quoted by Cubs.com) chalked Wada’s lack of recent results up to a mental, rather than physical, problem:

I see him trying to be too complicated—let’s simplify this whole thing, trust your good stuff. Trust your stuff, don’t try to fool everybody, believe in what you’re doing and you’ll be much better.

Given that analysis, I became curious to find out if Wada’s “stuff”, if you want to call it that, is where it was last year, when he saw some reasonable success. If it isn’t, then trusting it more won’t do much good. If it is, Maddon’s hypothesis might be correct, and we may be able to find evidence for his lack of “belief.” So how to quantify “stuff”? In a piece I wrote here a few weeks ago, I noted that Wada, despite throwing slower, and with less movement, than almost anyone in the league, has been able to create clear separation in the movement of two sets of pitches with identical velocities (split-finger/slider, four-seam/sinker). I concluded that:

one of the keys to getting really good hitters out—and all big-league hitters are, in an absolute sense, really good—is to limit their ability to differentiate between pitches as they come out of the hand. By maintaining a five-pitch arsenal, two pairs of which have identical velocities coming out of the hand, Wada has been able, to some degree, to mitigate his lack of pure “stuff” by keeping hitters guessing. Whether he can continue that trend, or whether hitters counter-adjust, is a matter for the future to determine.

Well, here we are in the future. Let’s see what’s happened to those differentials. First, as we did last time, let’s confirm that Wada is still throwing two pairs of pitches with identical velocities: 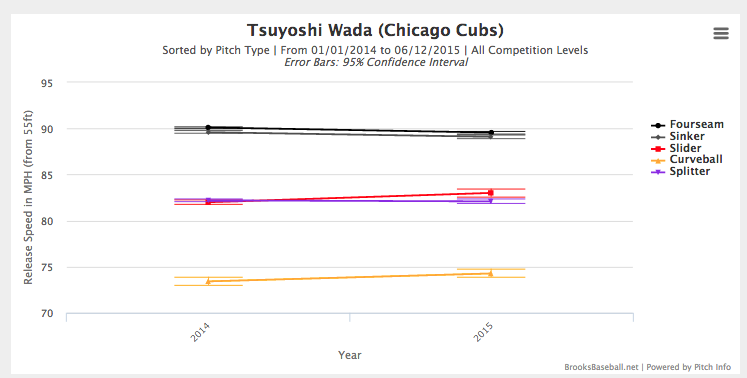 Yep. All looks kosher there. There’s a tiny degree of separation between the slider and the splitter, but they remain essentially identical. So let’s look at the vertical movement Wada has been able to achieve with his five-pitch mix, and see if he’s maintained the differentials he achieved there last year: 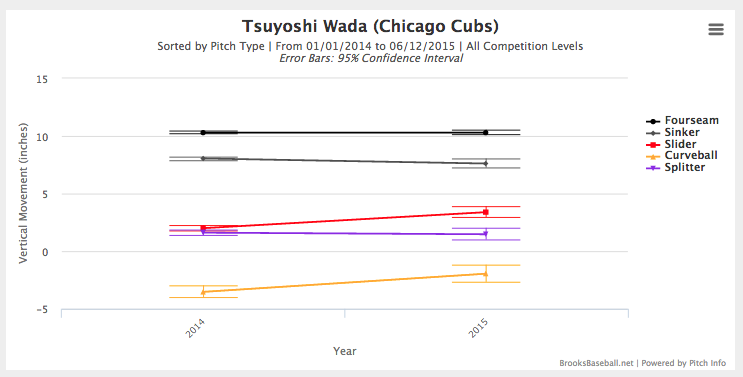 This looks pretty good. Last month, I noted that the four-seamer and the sinker, despite being thrown at identical velocities, had about two inches of separation in vertical movement, and that this helped to keep hitters off balance. That separation still exists and, if anything, has grown somewhat larger. So let’s take a look at horizontal movement, where we saw, earlier, a separation of about nine inches between the slider and the split-finger: 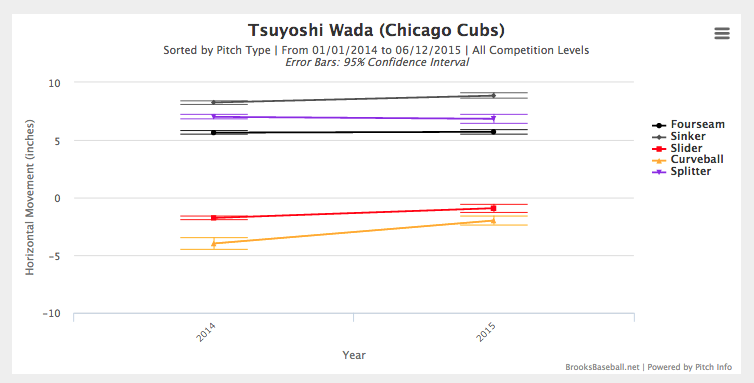 Well, it’s not exactly nine inches any more, but it’s not like there’s an enormous gap, either; Wada’s differential on the two pitches currently sits at about eight inches. Given the relatively small sample sizes we’re looking at here, I’m willing to call this even. In short, at least on the basis of the differentials I identified earlier in the year, there’s not a lot of change between 2014’s version of Tsuyoshi Wada and 2015’s—except for the results. And that is, to put it mildly, puzzling. To wit, here is the SLG Wada has allowed on each of his pitches this year: 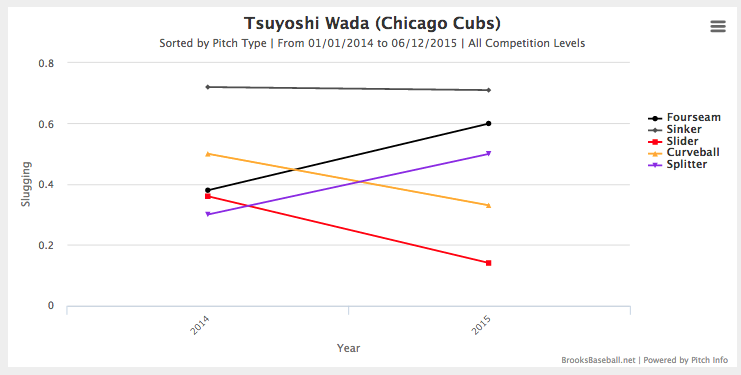 This chart suggests that Wada’s breaking stuff—his slider and his curveball—has actually been better this year than last, and that his straight stuff—with the exception of his four-seam fastball—has been notably worse. This is hard to square with the unchanged differentials described above, but there must be a reason for it. Perhaps Wada has put his straight stuff in a different place than he did last year? 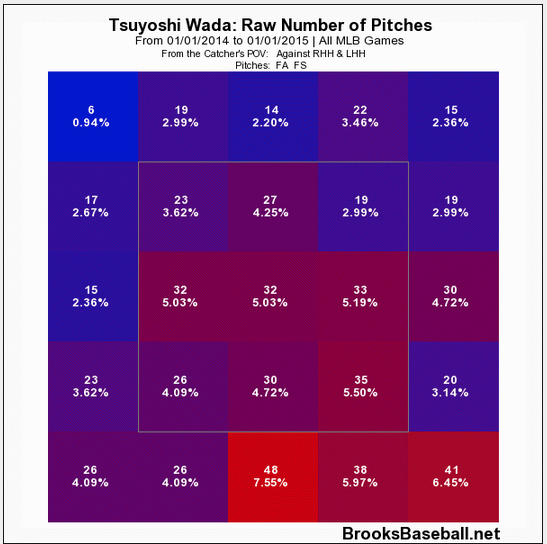 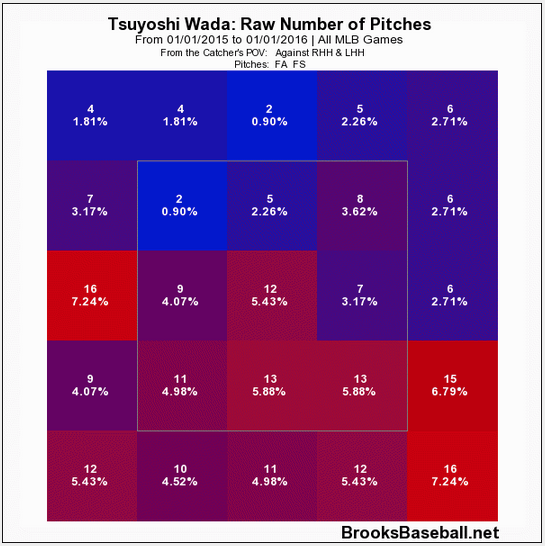 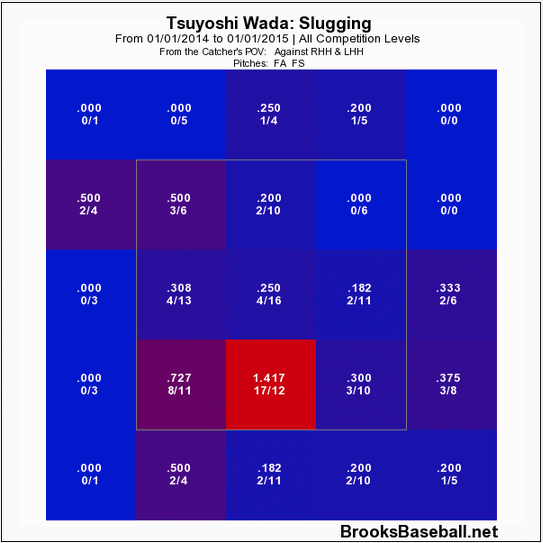 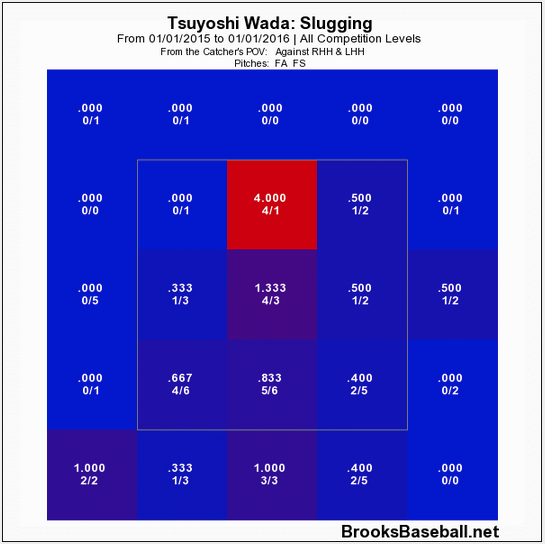 Well, maybe. There is that big red spot in the top part of the zone in the lower (2015) profile. But that spot corresponds to exactly one pitch, a homer allowed to Denard Span on May 25th—two starts before the trouble started. With that kind of limited sample size, it’s unfair and inappropriate to draw any kind of conclusions. In short, I’m puzzled. All I can conclude is the following:

(1) Wada seems to have been able to maintain the movement differentials between his pitches that persisted throughout last year;

(2) Wada has been giving up more home runs and doubles on sinkers and split-fingers than he did last year;

(3) Wada has been giving up fewer home runs and doubles on curveballs and sliders than he did last year;

(4) Wada’s location on those pitches has not changed appreciably since last year, and yet;

(5) Wada has been quite a bit worse overall this year than he was last year.

Frankly, at this point, I’m not sure what to make of all that. There’s clearly something going wrong for Wada. What it is, exactly, is far more opaque. Maybe, as Maddon suggested, it’s a lack of confidence in his stuff. But I can’t find any evidence for or against that conclusion in the profile. Until I do, I’m going to keep a close eye on Wada’s performance and see what changes.

Tags: Tsuyoshi Wada |
Rian Watt
Follow @rianwatt
Rian is the editor-in-chief of BP Wrigleyville, an author at Baseball Prospectus, and a contributor at VICE Sports and FiveThirtyEight. He's based in Boston, and misses Chicago every day.
read more from Rian Watt