When we think of Jake Arrieta, we think of a brilliant, under the radar (relative to where he should be), high-strikeout kind of guy, who’s second in the Cubs rotation but could be a number one starter in plenty of other organizations. We’re even starting to include him in the Cy Young discussion. And yet, this is the same Arrieta who pitched for the Baltimore Orioles in from 2010-2013 (without the magnificent beard), and put up atrocious numbers (putting up an ERA of 6.20 in his final full season with the O’s), while relying heavily on hard pitches and sporting poor command of his breaking pitches, when he used them at all.

Those days seem to be over. In 2014, Arrieta really began to dominate the quiet conversation about who would be the Cubs’ future ace, and the theory that Arrieta would be that guy—then just whispered—is now standard among not just fans of the Cubs, but fans of baseball and the media as well. Arrieta flirted with no hitters on two separate occasions in 2014, one of which became a one-hit complete game shutout in which Arrieta racked up a season high 13 strikeouts. These are feats that would have been hard to believe during his days in Baltimore.

Those numbers are admirable when viewed in isolation; they’re even more impressive when they’re put into the context of the rest of the pitchers in Major League Baseball. This is where Arrieta currently ranks in some major categories:

For what it’s worth, the guys he’s tied for first with in W/L record are Dallas Keuchel and Madison Bumgarner. Just thought I’d mention that. In any case, taken together, those are some important categories to be among the top 10 in.

So what made the difference for Arrieta? Well, there are a few things I’ve noticed. I’ve spent quite a bit of time digging through his ‘then and now’ numbers, zone maps, and watching old video of him pitching with the Orioles and then with the Cubs. Three things stuck out to me. First, his velocity has ticked up; second, he is able to control and command his pitches much better now than he was before, and; third, he’s decreased the use of his fastball in favor of more sinkers, while also increasing the usage of his breaking pitches very sequentially.

The change began in 2012 while Arrieta was still with the Orioles. During the later half of the season, his velocity ticked up considerably. 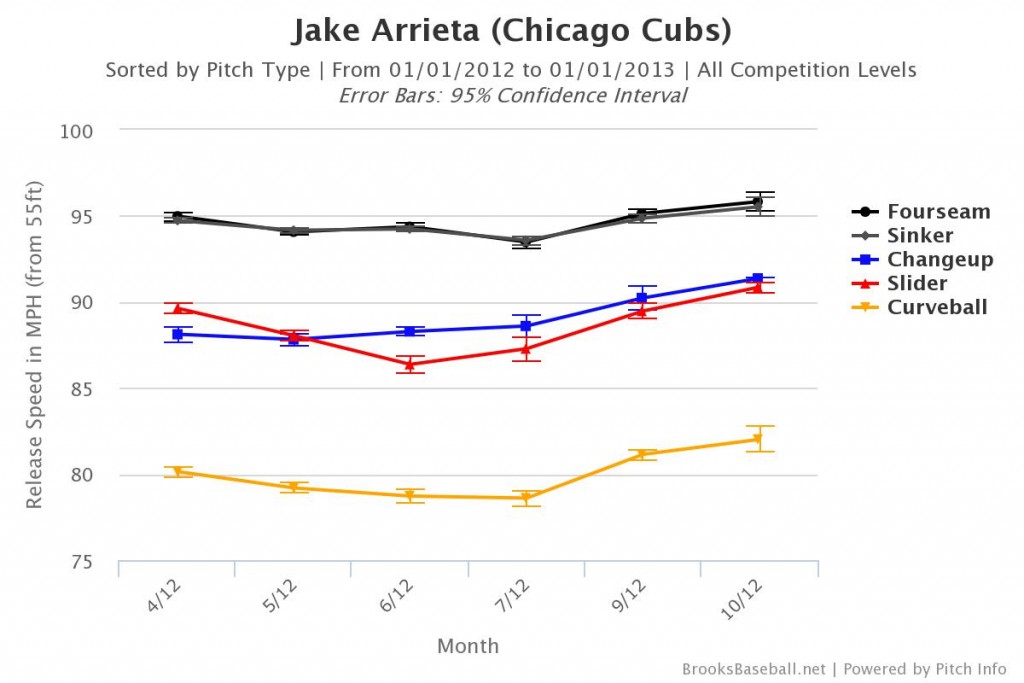 Let’s compare just a few of his numbers from 2012 to his previous seasons with the Orioles as well.

As you’ve probably noticed already, as early as 2010, Arrieta was striking out more batters than he had before, while walking less. He brought his K/BB ratio up to 3.11 in 2012 from anemic marks of 1.08 and 1.58 in 2010 and 2011, respectively. Even with those improvements, however, he still finished the 2012 campaign with a career-worst ERA of 6.20. It should be noted that his FIP was significantly lower in that season, at just 4.05. It sure didn’t help that the defense behind him that season was poor enough to be ranked 21st in DRS at -13 runs.

What seemed to be the key adjustment for Arrieta in coming to Chicago was perfecting his command and control of his breaking pitches. Today, his slider is no longer a hanging slider, and he locates it quite well. Look at the difference in location on his slider from his time with the Orioles vs. his time with the Cubs: 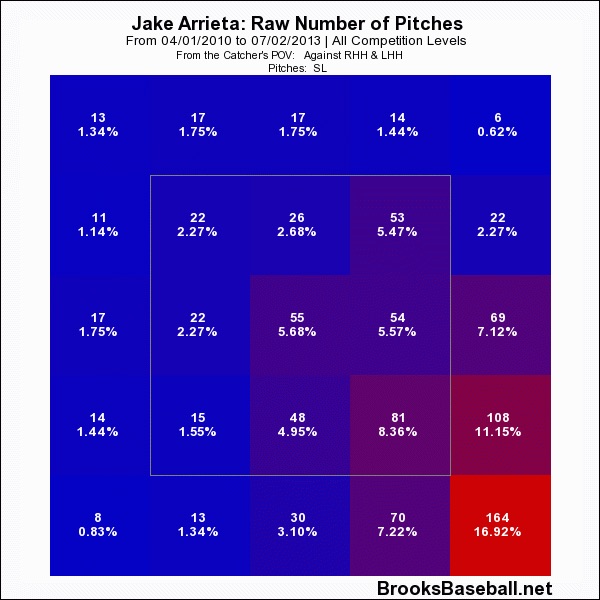 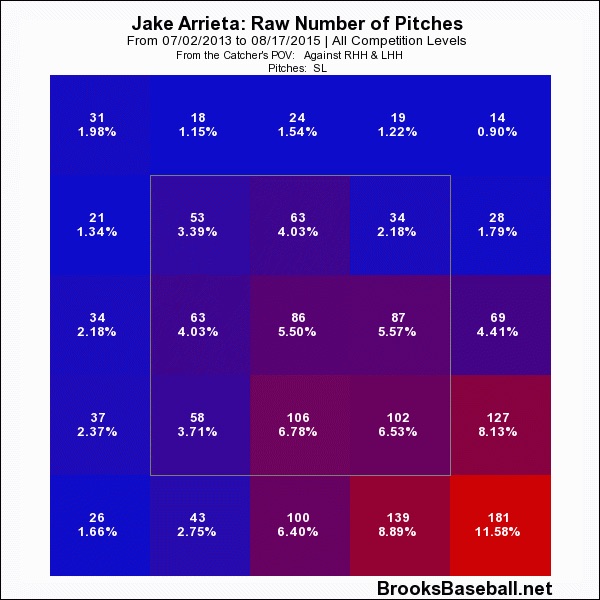 He also cleaned up the location on his now-famous curveball. These days, it’s seeing much better breaking action than it did in the past (indicating an improvement in mechanics), which is allowing him to induce many more whiffs: 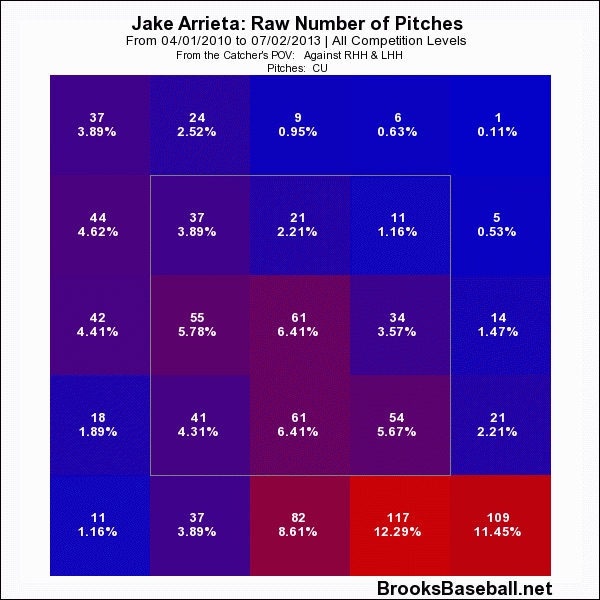 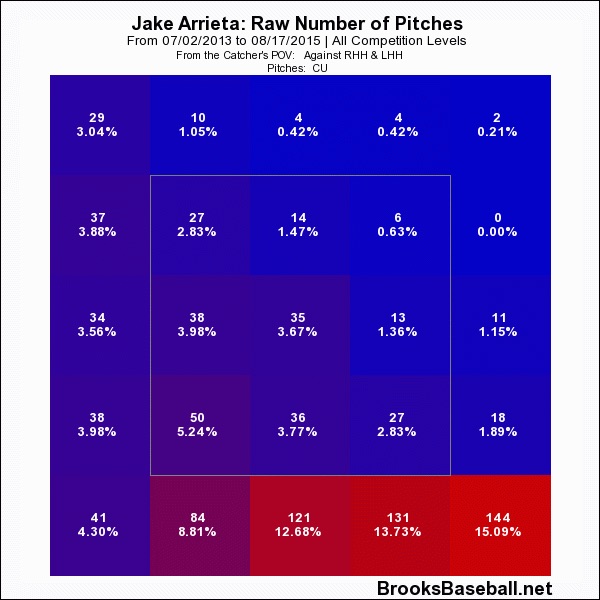 All these location changes seem subtle, and they happened gradually over time. Arrieta wasn’t an ace the moment he put on the pinstripes, but these changes—when taken together—have made all the difference. So that’s that. Now, if you want to see something really crazy, check out Arrieta’s batting average maps on both his slider and his curveball from his Baltimore days vs. his Chicago days: 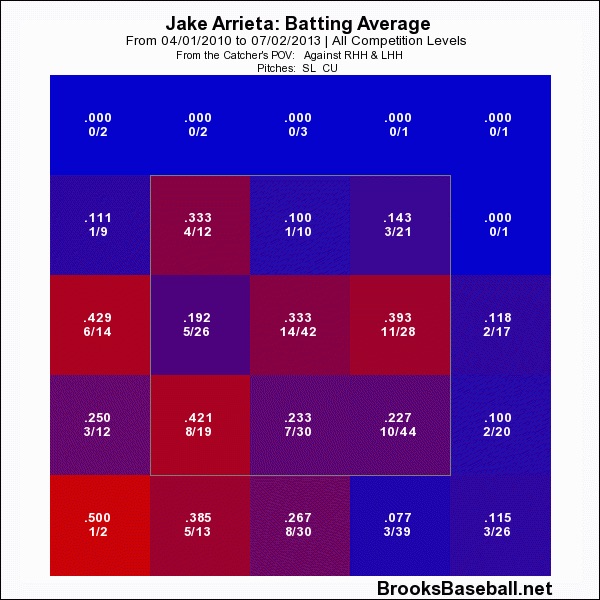 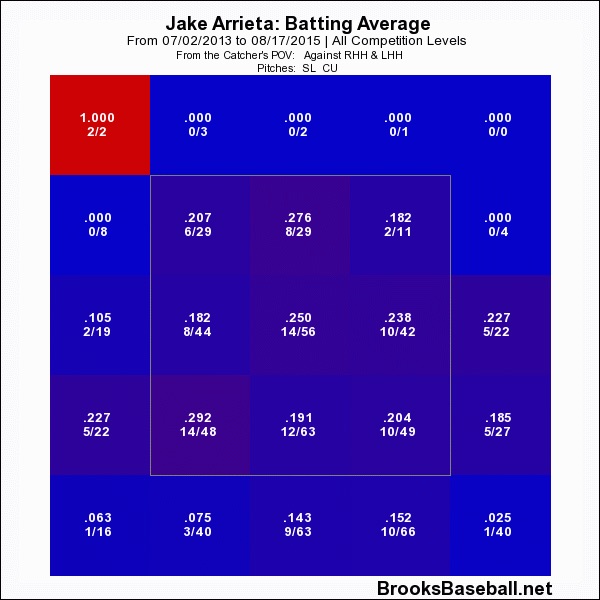 It doesn’t take rocket science to figure out what Arrieta’s problems were in Baltimore. His batting average against on his curveball went from .234 with the Orioles to just .152 with the Cubs. That’s quite an improvement.

Because he has decent velocity, but doesn’t usually hit anything much over 95, it seems as though Arrieta has become a lot more comfortable using pitches with movement, which could also explain why he’s seemed to drop the fastball in favor of more sinkers. He has a much higher whiff rate on pitches outside the zone than he has had in the past, most likely due to his much-improved command.

Arrieta seems to have figured himself out quite well in Chicago, and has worked hard to become the composed, calm and collected man on the mound that he is today. The bottom line is he had the pitches to throw in Baltimore, but needed fine tuning to be able to use them efficiently. The Cubs’ excellent pitching development staff was able to hone Arrieta’s ability to locate his pitches and implement a plan of action, and it’s been the key to his success. If Arrieta keeps up this progress (which all signs suggest he should be able to) he will find himself a part of this rotation for a long time to come. That, happily, seemed to be a goal Arrieta had in mind when arriving here, as he was quoted almost exactly two years ago in September of 2013 saying, “that’s my goal, to be a part of this rotation for many years.” I think the Chicago Cubs and their fans would probably like that, too.

Tags: Breaking Balls, Jake Arrieta, Pitching |
Cat Garcia
Follow @TheBaseballGirl
Cat Garcia is a freelance baseball writer from Chicago. When she is not writing or reading about baseball, she can be found at her place of employment, located at 1060 W. Addison Street.
read more from Cat Garcia