Jason Hammel failed to throw six innings again Wednesday, a modest feat he’s only accomplished twice since the beginning of July. After failing to retire Joey Votto and Brandon Phillips in the sixth, Joe Maddon sauntered to the mound to once again pull Hammel early. The Cubs’ recent skid, in which they’ve lost three consecutive series, rests in part on the shoulders of their 3-5 starters, who have failed to be effective and get deep into games. As the best of those three pitchers, and the only one likely to see significant time in the playoffs should the club make it to the divisional round, it’s worth considering Hammel’s struggles to get into the sixth and seventh innings.

In short, Hammel has had a good season with the Cubs, but he is experiencing a decline in performance similar to that which he experienced in the second half with Oakland last season. In 13 games (12 starts) with the A’s, Hammel posted a 4.26 ERA, but more importantly an 18.9 percent strikeout rate and a 7.3 percent walk rate, both considerably worse than his 2014 numbers with the Cubs: 2.98, 24.2 percent, and 5.4 percent, respectively. Despite this, the Cubs’ front office braintrust decided to bring back the big righty on a very modest two-year, $20 million contract. Theo Epstein and Jed Hoyer believed in Hammel to reproduce, to some degree, the success he had enjoyed in his first Cubs stint.

This season, Hammel has totaled a 3.42 ERA, a good 24.7 percent strikeout rate, and a 5.5 percent walk rate, the latter two numbers significantly better than the 2015 league averages of 20.2 percent and 7.5 percent , respectively. However, those numbers are the product of a blistering April-June, in which he posted a 26 percent strikeout rate, a 4.5 percent walk rate, and a 2.92 ERA over 15 starts. His season numbers are tempered by a second half in which he’s seen his BABIP inflate from .260 to .300, coupled with slight regressions in strikeout and walk rates.

These numbers suggest that he isn’t an appreciably different pitcher than he was last season. I’m not satisfied with a simple “Hammel-as-first-half-stud” narrative, though, so let’s take a look at his pitch usage and ability to induce whiffs on different pitches, akin to the strategy Sahadev Sharma used when tackling Hammel’s early season success a few months ago. First, let’s glance at Hammel’s raw percentage of pitches from April-June compared to July-present. 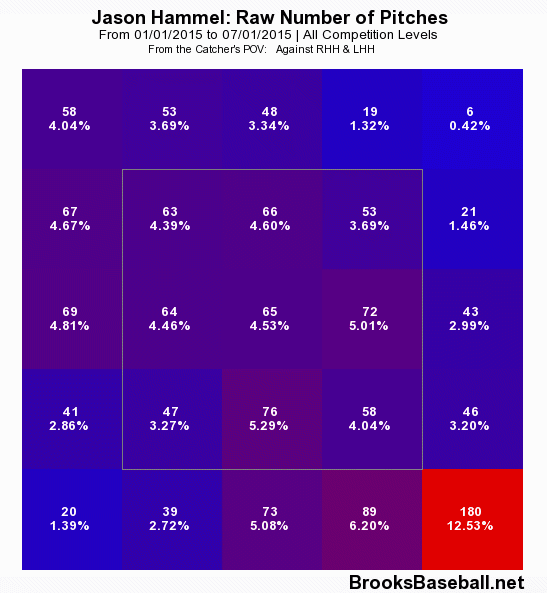 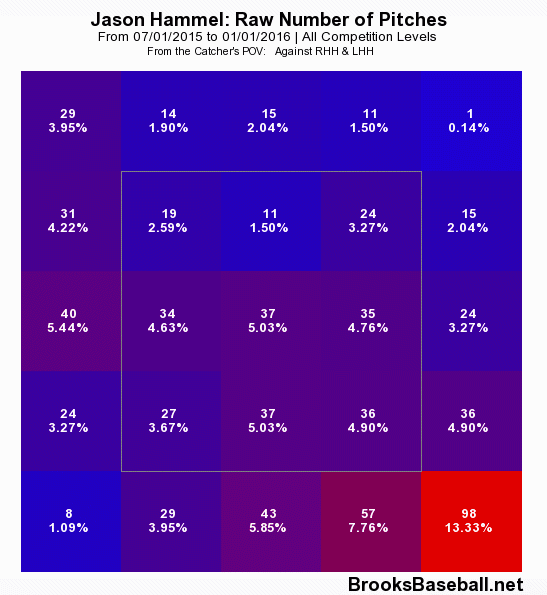 There’s actually quite a large difference, but it’s somewhat counterintuitive: Hammel pounded the zone in the first half, particularly the up-and-in spots to righties, but has fairly radically moved towards throwing down-and-away to righties since. To explain why this has proven ineffective, a glance at whiffs on all pitches over the same periods. 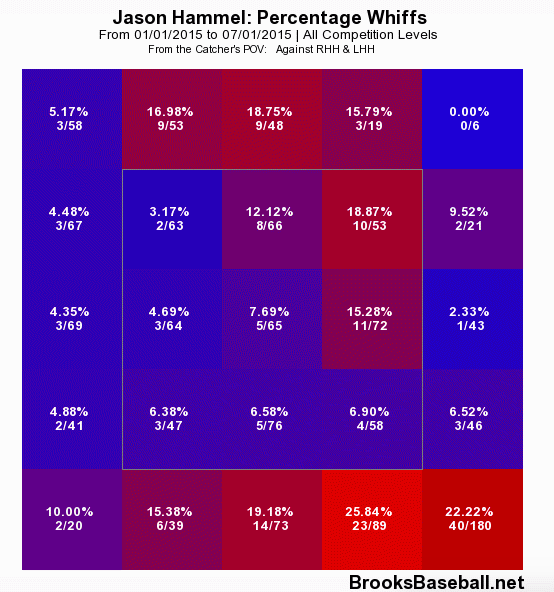 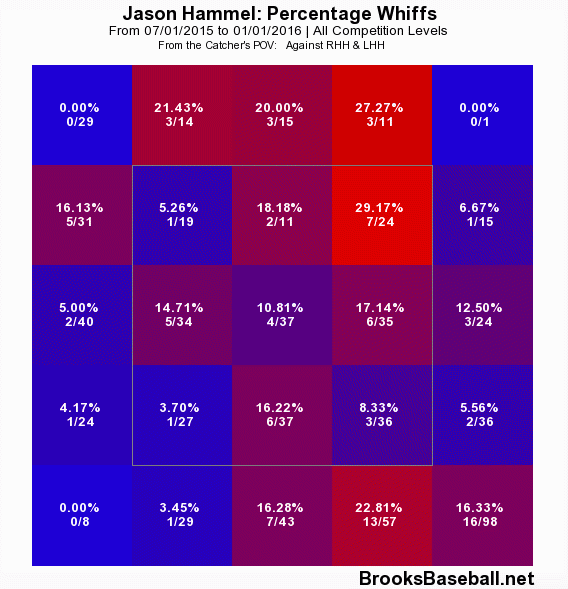 Perhaps because he’s exclusively throwing down in the zone, his percentage of whiffs on pitches below the zone has fallen significantly. I’m confounded by this, considering Hammel’s good 22.4 percent strikeout percentage in the second half.

Maybe, then, his problems are pitch-specific. Sharma zeroed in on Hammel’s fastball, in particular. 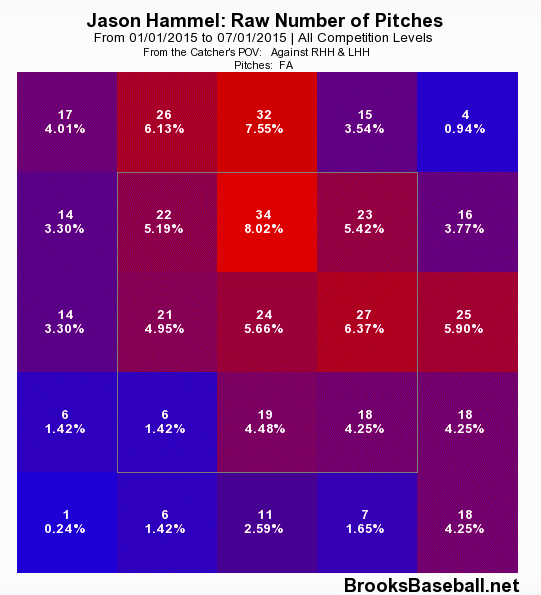 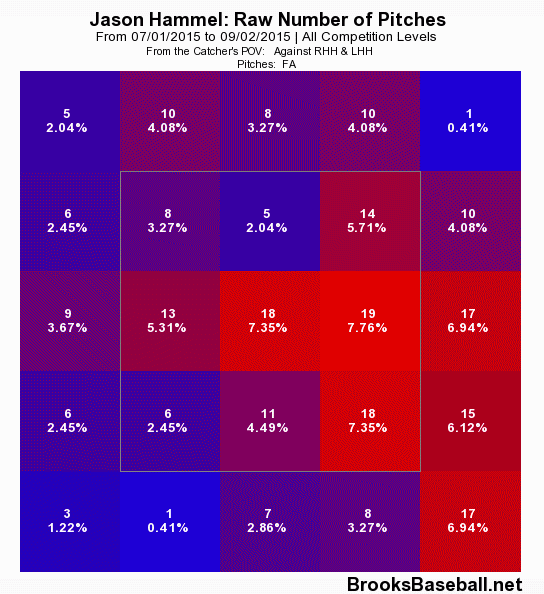 Hammel’s great first two months relied on fastball location, targeting the upper reaches of the zone, but he hasn’t sustained that caliber of fastball command throughout the season. Since the beginning of July, Hammel has gone down and away with his four-seamer, more in line with where we might expect him to throw his slider. We’ve established that he’s altered where he’s locating his fastball, so let’s look at the other factor in Hammel’s early success, according to Sharma: missing bats with his slider. Here are his whiffs by pitch type in 2015: 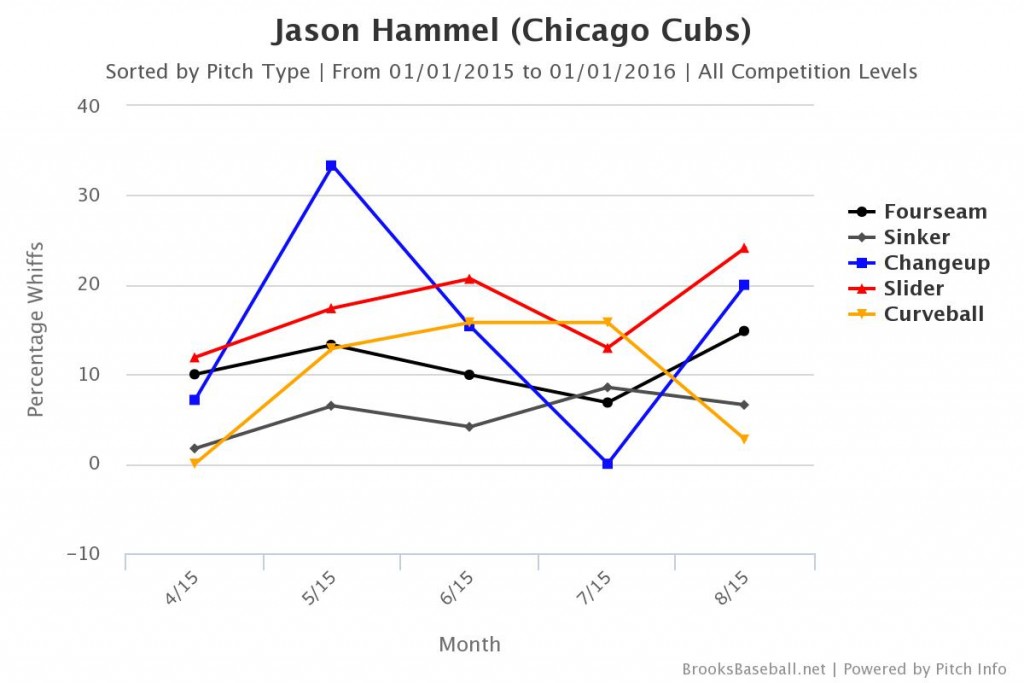 In August, Hammel induced more whiffs as a percentage of sliders thrown than any other month, a rebound after a July in which all his key pitches got fewer whiffs. It’s unlikely that his recent performance has been a function of his swing-and-miss abilities.

With all that in mind, the trouble appears to be not the amount of bats he’s missing, but the ones that he doesn’t miss: his April-June HR/FB rate has nearly doubled, from 9.4 percent to 18.2 percent. In his last 10 starts, he’s allowed 11 home runs in a mere 51 1/3 innings. As the weather got warmer, Hammel began to serve up more long balls; in only three of his 11 starts has he managed to keep opposing hitters in the yard. While I can’t offer a definitive explanation for this, I do have a theory, and it’s rooted in his pitch usage. 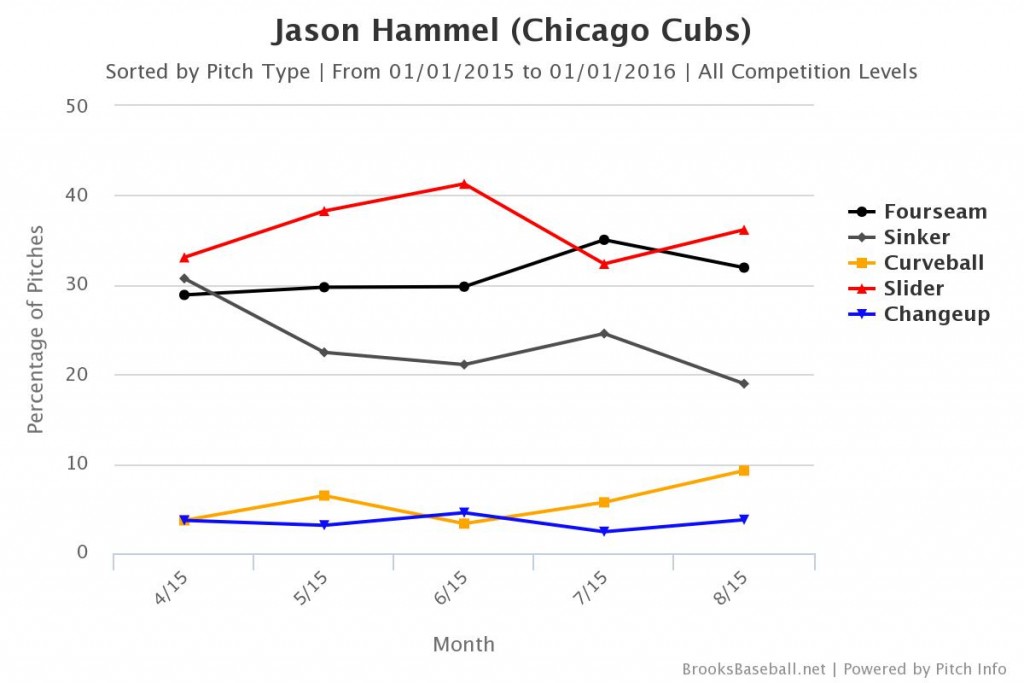 After a first half in which he effectively mixed his good slider and four-seamer, he’s taken to throwing more fastballs than sliders over the past two months. Combined with his changed approach to locating his fastball, hitters have been able to look for his two best pitches in essentially the same spots. So, while his whiffs on the slider have gone up, he isn’t keeping hitters off of his fastball like he was the first few months. Therefore, more squared up pitches and more home runs. To demonstrate, here’s opponents’ slugging against each of Hammel’s pitches, by month: 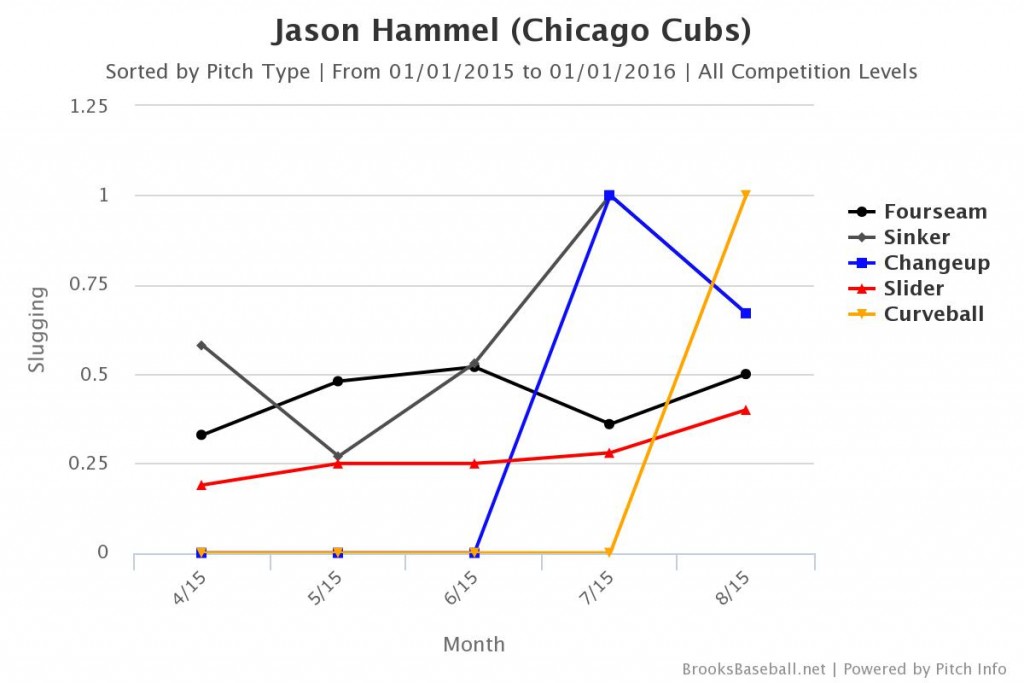 Slugging against the slider has gone up significantly, as it has against his seldom-used change and curve, and his sinker.

Unfortunately, I’m not confident enough to draw any more conclusions from Hammel’s first- and second-half discrepancies. He’s proven to be pretty weird, given his rate stats, usage, and whiff percentages, defying conventional signs for alarm or patterns of decline. Other than home runs allowed, Hammel has been all right.

There is one more thing regarding the large righty that bears consideration, and that’s Joe Maddon’s short leash. As the Cubs have neared the end of the season, and as they’ve battled the Giants to maintain their second Wild Card lead, Maddon has been much less forgiving with Hammel. As you might remember, the pitcher expressed displeasure to being pulled early in starts, but Maddon hasn’t heeded Hammel’s desires to pitch later into games. This is partly due to Hammel’s own poor performance, punctuated by those home runs, but Maddon seems to be managing Hammel like his starts are playoff starts, turning the game over to the bullpen earlier than usual. It’s an interesting strategy that might be a preemptive move to keep Hammel from further loss in effectiveness.

It’s imperative that the Cubs’ back end starters figure out a way to eat more innings as September wears on, not only because they need wins to stave off wild card contenders, but also to keep the top bullpen arms fresh heading into the playoffs. Hammel limiting home runs is one part of that equation. If he’s able to keep hitters in the park, he might gain more of Maddon’s trust, and he might set himself up for success should he find himself pitching game three in the Division Series against the Cardinals.

Tags: Jason Hammel |
Zack Moser
Zack is a history graduate of the University of Illinois, Urbana-Champaign, currently living in Boston. His writing has been published in Black Ball Journal, Cuban Baseball Legends: Baseball's Alternative Universe, and Baseball Prospectus. You can find his stranger thoughts at BP's Short Relief.
read more from Zack Moser

I don’t think enough emphasis has been put on how detrimental Madden’s blatant lack of confidence in Hammel has been to the pitcher’s mental game. Imagine not being allowed to make any mistakes without being immediately pulled. Madden needs to learn how to be an effective manager to all types of players, including those who may need a bit more outward support from their manager. The unnecessary pressure Madden puts on Hammel to be perfect or get pulled has to be impacting his mental focus, adding unnecessary pressure, distracting him from doing his job as a pitcher, and undoubtedly must be impacting his own internal confidence. Hey Madden, you’re single-handedly dismantling the mental game of an otherwise excellent pitcher! What does Madden have against Hammel? If I were in the Cubs front office I would be pissed that Madden is wasting/destroying an important asset. I would direct Madden to lay off Hammel a bit and allow him to do what he has been trained to do and is capable of doing – and that’s being a starting pitcher in the Big Show.